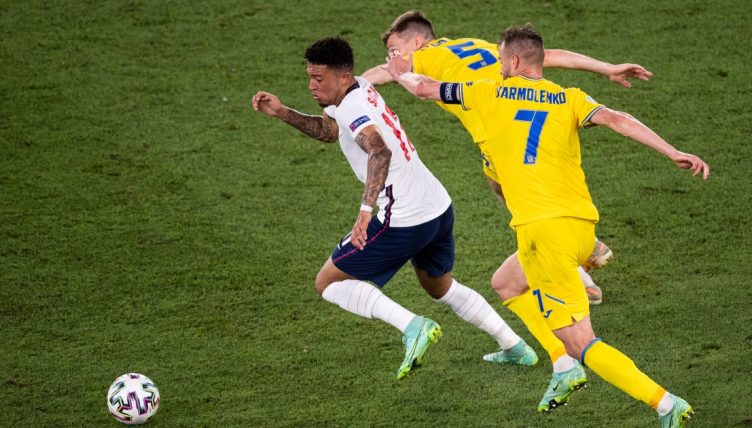 It often feels like the bigger build-up something receives, the more likely it is to disappoint.

Take Line of Duty for example. For weeks, the police drama reminded the nation of the merits of event television in the Netflix age before the final episode underwhelmed almost everybody and sent Twitter into meltdown.

This principle applies across many aspects of life, from J Cole’s latest album to hyping yourself up for a Tinder date after weeks of online chat before discovering you possess the exact inverse of chemistry in person.

Which leads us nicely to Jadon Sancho.

There’s a multitude of reasons why this should be an excellent signing; the 21-year-old winger is a constant menace to opponents with his directness, quick feet and ability to float across the forward line.

But there’s a feeling Sancho would have to win the Ballon d’Or every year between now and infinity to justify all the gossip column inches dedicated to his name.

Those doubts were expunged during England’s 4-0 thumping of Ukraine on Saturday night.

Having played just six minutes at Euro 2020 beforehand, Sancho was parachuted into Gareth Southgate’s line-up for the quarter-final in Rome.

And the man who was left out of the matchday squad for the first group match against Croatia provided exactly what England had been lacking in this tournament so far – pace, guile and trickery from the first whistle.

England’s run had been built upon defensive solidity and pragmatism but they tore into Ukraine like a recently released hostage attacking a KFC bargain bucket.

Sancho set the pace. With England already a goal up, the forward collected possession on the right flank and played an excellent one-two with both Kalvin Phillips and Mason Mount.

With the Ukraine defence backing off in a blind panic, Sancho released Raheem Sterling with a perfectly weighted pass.

The overlapping Luke Shaw eventually fizzed a dangerous ball across the penalty area that didn’t lead to anything much but the fluid move was an indication of the influence Sancho was having on the game.

And with half-time approaching as Ukraine looking dangerous for the first time, United’s new star signing took it upon himself to remind his opponents just whose night it was.

Sancho found himself with the ball inside the England half and, eying the chance to inflict more psychological damage upon the Ukrainians, turbo-charged forward.

Both West Ham winger Andriy Yarmolenko and team-mate Serhiy Sydorchuk possessed the wherewithal to attempt stopping Sancho but were unable to cope with his slight of foot.

Like an eel that’s enjoyed a bath in a vat of olive oil, Sancho proved too slippery to handle as he weaved in and out of the Ukraine pair only to be stopped by a Yarmolenko clip.

It may have only lasted seconds but the moment had a profound impact. Firstly, it reminded England of their superiority during the only spell of the match where they were anything other than dominant. Two quick-fire goals after half-time demonstrated the restorative impact of Sancho’s dribble.

It also provided compelling evidence to Manchester United fans that Sancho will have been worth the wait when he steps out at Old Trafford later this summer.

Despite his exploits at Borussia Dortmund, registering 36 goals or assists in all competitions and winning the German Cup, Sancho has somewhat slipped the radar for English audiences.

That will be impossible now. Not only will Sancho be playing for English football’s most high-profile club, his performance against Ukraine showcased his talents to millions of domestic viewers who’d likely never see him play before.

But Sancho can become that most of elusive of entities; somebody who lives up to the ridiculous levels of hype.