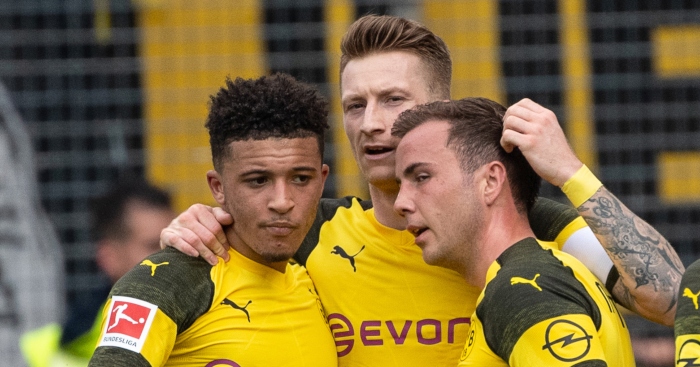 To call this season a breakthrough year for Jadon Sancho almost understates the impact the England youngster has had for Borussia Dortmund.

After 12 games (five from the start) and one goal in his debut season, the 19-year-old has enjoyed a sophomore campaign during which he has played an integral role in a title charge which looks capable of going right to the wire.

Dortmund are just one point behind league leaders Bayern Munich, and much of this is down to the free-flowing attacking football we’ve seen from Sancho, Marco Reus and the entire supporting cast.

We have had few better examples of this than the goal from Sancho which set Lucien Favre’s side on their way to three points at Freiburg.

It tells you all you need to know about the former Manchester City youngster that we’ve long passed the point where a Sancho goal is a headline in his own right.

He seems too vital, so much a part of the furniture, that it’s just accepted as a normal part of any given weekend when we see his name on the scoresheet.

The goal against Freiburg was his third in two games and his 12th overall this season, and it showed that while he can sometimes do everything himself, sometimes he has the nous to just step up when needed to finish off the good work of others.

A lot of the more eye-catching moments of Sancho’s season have been the kind of highlight-reel moments which are inconsequential aside from adding more YouTube royalties for EDM artists.

Maybe it’s about the long game, though. After spending months breaking spirits and crushing opponents down into a fine dust, there might be a temptation for defenders to give him a wider berth. After all, it would be wrong to think Freiburg’s players had forgotten about his antics in the reverse fixture.

This might be fine if Sancho was the only member of the squad with quick feet and a quicker mind, but the England international’s most recent goal showed us this sort of thing flows throughout the entire squad.

11 goals and 16 assists in the Bundesliga this season 🔥

Jadon Sancho was at it again for Borussia Dortmund yesterday 💪 pic.twitter.com/7GcJ4jGtz8

When you watch the one-touch approach play from Marco Reus, Raphaël Guerreiro and Mario Götze, it’s easy to see why things have been made so easy for Sancho to tap home.

It’s as if the trio have decided “we’re going to score now” and worked on the assumption that someone would arrive to finish off the move and make the final ball a formality.

With Bayern having squeezed out a 1-0 victory over Werder Bremen the day before, there ought to have been pressure on Dortmund to the point that their free-flowing play might end up being sacrificed for something more sensible.

However, under Favre, the choice to value instinct over logic has been the sensible thing.

As with similarly free-flowing pretenders in the past, from Brendan Rodgers’ Liverpool in the Premier League to Leonardo Jardim’s Monaco in wider Europe, there can be a danger that by stopping to look around from the summit you can begin to overthink how you arrived there and lose your balance.

Instead, by refusing to relent or compromise, you’re ensuring that you remain the focus of everyone’s eyes but your own.

Borussia Dortmund might ultimately fall short in their pursuit of the Bundesliga title, but they’ve already exceeded what many hoped from a team which only secured a Champions League place on the final day of last season.

Favre’s team have already long passed the previous campaign’s tally of 55 points, while the 2016-17 total of 64 was surpassed on April 13.

If Dortmund win their remaining games, they’ll match the 81 points which earned them their last championship under Jürgen Klopp, but even that might not be enough.

Sancho has more than played his part in the challenge, during which Dortmund have lost just three times, but his opener in Freiburg demonstrates how it’s a team game.

The problem for Dortmund’s rivals, of course, is that they have an entire team of Sanchos.