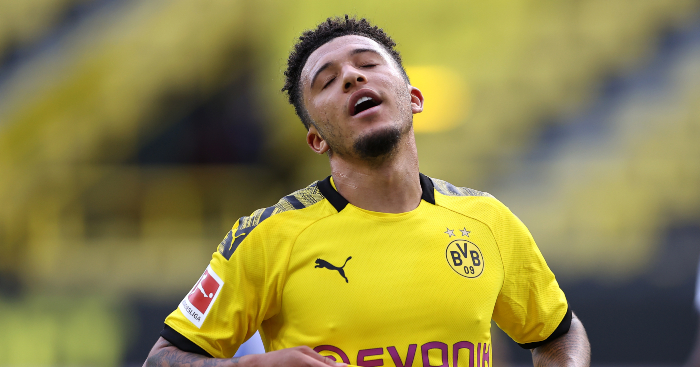 It might have taken a while for Jadon Sancho to get up to speed after returning to Bundesliga action, but that speed is impossible for anyone to cope with.

The Borussia Dortmund winger hit new heights against Paderborn on the last day of May, scoring his first ever career hat-trick to bring his club tally for the season up to 20.

While that might be the more obvious standout match, there was one moment in Dortmund’s win against Hertha Berlin which arguably gave an even greater guide to the fear he instils in opponents.

Hertha defender Peter Pekarik is no rookie by any stretch.

This is a man with more than 150 Bundesliga appearances to his name, as well as nearly 100 international caps for Slovakia.

He played for his country at the 2010 World Cup, as they stunned Italy in the group stage, and was in the Euro 2016 team that held England to a goalless draw. He has played Champions League football for Wolfsburg and featured in the Europa League for Hertha.

Put simply, he is no mug. And yet, when faced with the prospect of going toe-to-toe with Sancho, he decided he’d rather turn himself into dust to avoid the confrontation.

Pekarik assessed the possibilities and decided he was happy to crumble out of existence, as long as he did it on what he considered to be his own terms.

It’s not Sancho’s movement in this moment which forces Pekarik to topple to the ground like a Jenga tower; it’s weeks if not months of similar movements which permanently remind you what’s in store if you attempt to stand up to the 20-year-old.

You’re not worried about being beaten or even embarrassed by Sancho – you’re at peace with that when you step onto the pitch. Eventually, the tension of putting off the inevitable is too much, and you decide it’s healthier to just get it over with rather than continuing to exist in perpetual fear.

Today wasn't Jadon Sancho's day in front of goal, but this would have been special 😮

That first defender will be having nightmares for weeks… pic.twitter.com/4HwtI5U1Tc

Sancho remains the kind of player who you can’t safely combat when he’s on his game.

Against Paderborn, he showed how standing off will only present him with more and arguably safer avenues to goal, but he’s never been afraid to take the more challenging route.

Eventually you reach the point where you face the decision between saving your own hide and protecting your team, and when the balance tips to the point where both actions are likely to result in a Dortmund goal, you can almost forgive those defenders who try to ensure their embarrassment doesn’t become the story.

The problem, of course, is that Sancho has the power to make you into the story whether you like it or not.

There might be an implication that if you go left, he’ll go right, leaving you able to make it look like you tried your best while showing him where to go with minimal resistance. You can hold your hands up and suggest you had no chance, while never putting yourself at any real risk.

But that only works when you ignore the occasions when you go left and he goes left too, to give himself an extra test he knows he’ll pass. When that happens, you’re left with little option other than sinking into the turf. Maybe you’ll have time for a little daydream as he goes about his business, and by the time you wake up the conversation might have moved on.

You don’t stop Jadon Sancho when he’s playing like this – you just have to hope he stops himself.

I mean can we just take a moment to appreciate how Jadon Sancho just glides past players for fun?! 😍 pic.twitter.com/ZcAetGVJCl

Borussia Dortmund’s title hopes might be hanging by a thread after their recent defeat against Bayern Munich, but when you look at Sancho at his best it’s hard to think of a team who wouldn’t become instant challengers with him in their ranks.

The best teams are those who stand tall in the face of top opposition. When confronted by Sancho, though, it’s hard for defenders to even take up a fraction of the space they could be occupying.

When you’re relying on a player to be their own saboteur, you’re instantly fighting a losing battle.