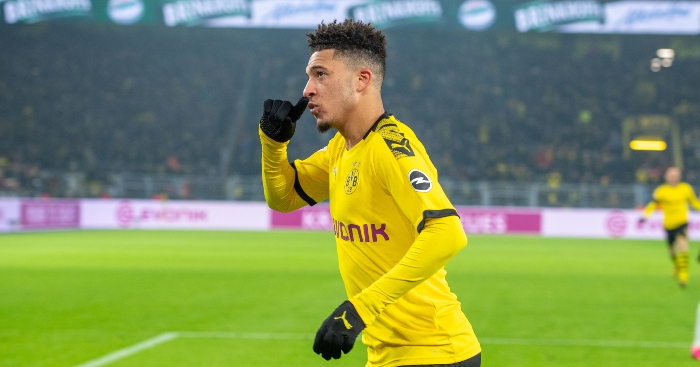 When we look at Jadon Sancho’s Borussia Dortmund numbers for the 2019-20 season, we should be getting excited. The fact that he’s made it normal should terrify everyone.

The England international has 11 goals and 11 assists in the Bundesliga this season, the second straight campaign in which he has posted double figures for both.

And questions over his consistency are long gone, but he’s already showing us the ceiling is higher than we even imagined.

Against Cologne on Friday night, Sancho wasted no time getting his team off the mark. Less than a minute was on the clock when he laid on the opener for Raphael Guerreiro, as if to say ‘I can do this whenever I want’.

By making moves with just 50 seconds played, Sancho begins by leaving us wondering why this sort of thing doesn’t happen every week, but at the same time it encourages us to take pity on anyone with the misfortune of having to deal with him.

Not only can you not let your guard down, but even keeping it fully up isn’t always enough. When Sancho is on his game, you quickly realise you have no actual say in matters.

It took just 52 seconds for Jadon Sancho to register an assist this evening! 🤯

He now has 2️⃣5️⃣ since the start of last season 🙌

More than any other player in Europe's top five leagues 🔥 pic.twitter.com/gGy9dH6ies

Sancho was almost as quick off the mark in the second period, beating Timo Horn high to his left, but it’s the way he ruins Rafael Czichos that really catches the eye.

The centre-back is barely able to keep his feet as he backtracks, unsure whether he can trust his own legs as he watches Sancho’s limbs move in ways he didn’t think possible.

When the mere movement of an opponent is enough to make you doubt gravity, the best you can hope for is being bailed out by your goalkeeper. Of course, that relies on Sancho relinquishing a level of control which feels about as complete as you can get, and why on earth would he do that?

The concern now is looking at Sancho and thinking ‘oh yeah, this is just what he does’ without stopping to acknowledge how ridiculous it is for us to be able to brush it off.

The frankly stupid numbers from others in the Bundesliga might not be helping – Erling Haaland’s five goals in 59 minutes jumps out in particular – but by brushing off a return of a goal or assist every 62 minutes we’re getting it all wrong.

When ‘phenomenal’ becomes ‘normal’, it’s both good and bad; it allows us to go more granular on the magic, exploring what Sancho does better than the rest and how this translates into results, but it also leaves us wondering whether a slightly worse return would be regarded as underwhelming despite still being outrageous for a 19-year-old.

Take his goal against RB Leipzig as an example. On its own, a tidy finish against a tough opponent. But then you realise he’s been doing this over and over, for the best part of two seasons, and you start to figure out that you can’t just view these moments in isolation.

Indeed, even some of the simpler finishes are the product of an all-round game which necessarily keeps opponents on the back foot. When they’re retreating, out of fear over what he might do to them, is it any wonder the opportunities look simple on a base level?

On an international level, this phenomenal club form hasn’t yet moved Sancho beyond a bit of a novelty for some fans, a player who probably deserves his place in the squad but isn’t necessarily a nailed-on starter.

A two-goal display against Kosovo should have changed some people’s minds, but only six of his 11 international games have come as a member of the starting line-up.

The more we see of Sancho at Dortmund, though, the harder it is to ignore his output (or potential output) in any scenario. This is someone who plays with no fear because he knows how good he is, and this is a combination which might confuse that class of England fan still uncomfortable with acknowledging their own superiority after so long without an international trophy.

That, though, is to confuse the collective with the individual, and to put too much weight on the unpredictability of tournament football. A player at Sancho’s level doesn’t need international honours to cement his quality; nor does Harry Kane, or Raheem Sterling, or any other squad member, while a weaker player wouldn’t jump the queue and become superior to the likes of David Beckham or Alan Shearer merely by virtue of a medal around their neck.

“Jadon’s a world-class player, no question about that,” Dortmund boss Lucien Favre said in December after Dortmund sealed their passage to the Champions League knockout stages.

With 10 goals in as many games, his form is nothing short of terrifying.

That he’s doing all of this as a 19-year-old raises it by so many rungs that we’ll soon need a new ladder.