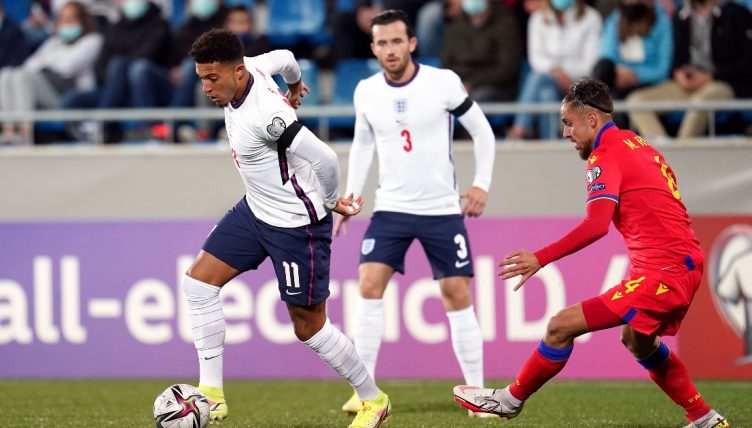 England‘s Jadon Sancho might not have hit the ground running in the Premier League, but rumours of his terminal decline may have been exaggerated.

The Manchester United winger has had a quiet start to the season for his new club, but a return to international duty gave him an opportunity to have some fun once more.

Sure, it might have only been against an Andorra side which has never scored against England, let alone taken a point from them, but this was about the act and not about the victim.

The version of Sancho we got over the weekend was the one some thought they’d be able to instantly enjoy at Old Trafford. As if he’s not a human but rather an automaton whose switch needs to be flicked to the on position with no other elements being taken into consideration.

The performance – from his two assists to his nutmeg on Txus Rubio – was Sancho’s way of saying, ‘No need to worry about me, I’m still here.’

We talk about attacking players knowing where the camera is looking, but perhaps this applies just as much to Rubio.

The defender has been playing international football for several years, certainly for long enough to know when someone other than him is the main character, and – while it’s almost certainly not deliberate – it looks as though he is walking off camera post-humiliation to allow his tormentor to have his place in the limelight.

He knows this isn’t about him, and he knows any efforts to regain his pride would ultimately come up fruitless. Time to move aside, then, and hopefully you can do so quickly enough that no one catches the name on your shirt to realise you were the victim.

Perhaps Rubio had seen his opponent in action for England before, for example in the win over the Czech Republic back in 2019. On that occasion, fresh from passing through Filip Novak as if he was a ghost, Sancho performed a blind nutmeg on Novak’s colleague David Pavelka with such casual brilliance that you imagine the only reason he wasn’t hacked down in retaliation is that the opponents couldn’t get a clear sight of him.

😍 Sancho with the double nutmeg! pic.twitter.com/eO6wZk5P1E

Given the adoption by Manchester United of a ‘no tactics, just vibes’ strategy this season, it’s easy to be confused by Sancho’s failure to gel with his new team-mates.

However, the 21-year-old has gone more than a month without starting a Premier League game – lining up just once alongside fellow new arrival Cristiano Ronaldo in the competition – and as we know, that’s long enough for some onlookers to make comprehensive assessments without considering what has changed.

It’s no coincidence that an environment which allowed Sancho to enjoy his football was also one which resulted in him picking up two assists. And, while the gulf between England and their opponents cannot be overlooked, it remains the case that his club will also go into the majority of its games with an expectation to win.

The difference is those moments in which he attempts plays like this and they don’t come off, the response might be to criticise the lack of simplicity rather than praising the idea to begin with. However, this was not a man signed for his simplicity. United have other people for that, and his ability to offer something more unexpected is a big part of the reason why he was so in-demand to begin with.

It’s not that a nutmeg for England against Andorra in a 5-0 win is a sign that Sancho is ‘back’, in much the same way that the lack of such a thing at club level isn’t a sign he ‘went away’ to begin with. However, it’s refreshing to know that desire to have fun – and to have fun at the expense of an opponent just because he can – isn’t suffering during what is otherwise a tough period.

Moments like this remind us he’s still the same person he ever was, and maybe this will be enough to stop people rushing to make up their mind about a player after less than 1000 minutes at a new club. Jadon Sancho is still the fun player he always was, and we should still be grateful for that.

If some people still need him to nutmeg a player who isn’t in an Andorra shirt, we shouldn’t have to wait too long.