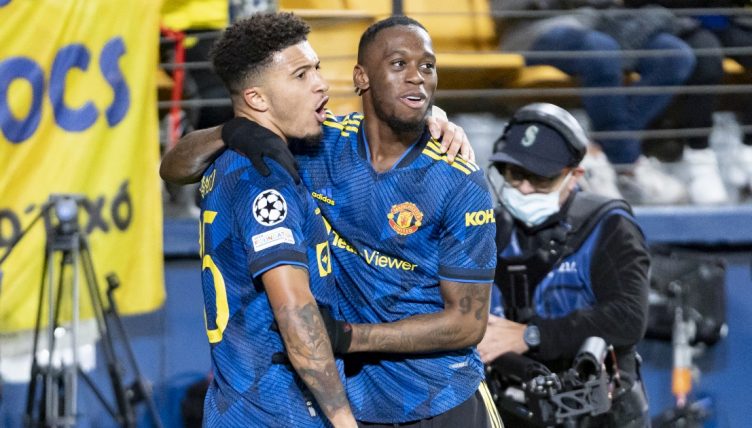 It took 15 games, but Jadon Sancho has his first goal in a Manchester United shirt, a veritable rocket that crashed off the crossbar and into the Villarreal net, sending United through to the Champions League Round of 16.

It is a universe United have not explored since 2019. Then, it was the height of Ole Gunnar Solskjaer fever with United doing the impossible in Paris but on this occasion, it was Michael Carrick’s turn to look not quite right in a suit.

Sancho’s goal was akin to one he scored so many times for Borussia Dortmund; the culmination of a counter-attacker inside a stadium covered in yellow. He could almost have sworn he was back in the Rhine.

It was a goal worthy of its potency.

Fred, at his tenacious best in the Estadio de la Ceramica, broke play down on the far side of United’s half. He combined with Cristiano Ronaldo, who of course had to pass the ball back to Fred with his trailing foot rather than do anything mildly un-clipable.

Ronaldo was off, like a Portuguese bull in a Spanish china shop (or rather a stadium named after ceramics), bursting into space down the left and when Fred laid it off to Scott McTominay, the Scot was able to find the No.7 in space.

Three men headed towards Ronaldo, and Marcus Rashford down the middle exploited the space with Ronaldo finding him with a casually brilliant first-time pass.

Then it was easy. Rashford pulled it back for Bruno Fernandes, Fernandes touched it across to Sancho, who had tracked the entire move from the right-hand side and avoided being picked up by any of Unai Emery’s defenders.

With a touch to steady himself, Sancho let rip and released a thunderous effort. It was struck with all the desire of a man who needed this to go in, both for himself and his team, but it was no uncontrolled hit-and-hope effort.

He sliced across the ball, causing it to spin away from Geronimo Rulli (great first name by the way) as it headed towards goal. Sancho’s right foot twisted high, sideways, and through the ball in a manner reminiscent of Irish dancing and, when it crashed off the crossbar and bounced in, you would have surely excused him if he broke out in a little jig.

As Rulli dived, one arm flailing at where the ball once was, I wonder if he shouted “Geronimo!”?

Goals are always better when they hit the crossbar first. It’s the thwacking sound as the ball crashes against the bar before sending the ball ping-ponging into the ground which makes them so satisfying and somehow makes feel more of a goal than others.

So how fitting that such an emphatic finish was so important.

First for Sancho, who needed that goal, and that overall impressive performance to prove that he can recapture his Dortmund form in a United shirt. Now he has a foundation to build upon.

Disappointment for Dortmund in Barcelona…

Such an immense talent 💛🖤 pic.twitter.com/mg10Nog9Mm

Second for United, who are now through as group winners and crucially began their post-Solskjaer period with a steady, professional win. It was not perfect but it was composed and self-assured, an un-emotional performance after an emotional few days.

Interim Manager Michael Carrick, his first-ever game as the main man in a dugout, echoed that sentiment at the end.

“It’s been an emotional few days,” he said. “Tonight was not important for me personally but for the team. It was about getting through.

“To get that feeling of winning a match again is huge for the players… situations like this test you, you find out who the real characters are and everyone stuck together fantastically well.”

For as long as he is interim, the former United midfielder, who was invited to become a coach as soon as he retired by Jose Mourinho, must continue to shield his team from emotions.

Amidst swirling rumours of temporary managers and Mauricio Pochettino, the United squad must continue to approach matches in as composed a manner as they did in Spain. They must not be exposed to crisis levels of despair if United lose at Stamford Bridge on Sunday, nor must they be allowed to get carried away if they etch out an unlikely win.

As a group, they have a job to do. And now, with a goal to his name, Sancho is beginning to do his.