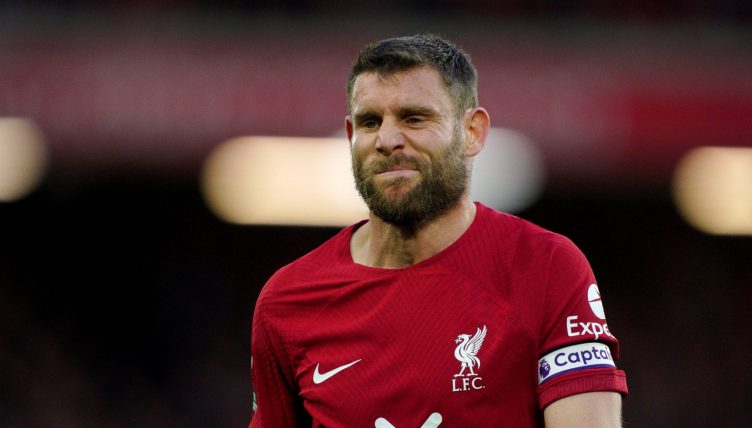 “What am I doing out here? How soon will this be over?”

Those were the questions racing through Gary Neville’s head as he sat on the toilet at the Hawthorns on New Year’s Day, 2011. It was half time and he’d been given the runaround by a not-especially-vintage Baggies left side of Marek Cech, Jerome Thomas and Graham Dorrans.

He knew he was done. That was his final appearance and he announced his retirement a month later.

Neville was 35 years old at the time. About a year younger than James Milner is now.

Some – from relative neutrals to particularly unsentimental Liverpool fans – have been asking those same questions of Milner for some time. Particularly when Manchester City’s Phil Foden had him on toast during a 2-2 draw at the Etihad last year.

Even then, Milner himself wasn’t asking those questions. Neither was Jurgen Klopp. The player and his coach felt he had more to give. And so, in the summer, he signed a one-year contract extension.

Outsiders questioned their judgement amid a midfield injury crisis and Liverpool’s early-season struggles in 2022-23. Milner has been the Premier League’s Mr. Eternal, but he looked his age in a 2-1 defeat to Erik ten Hag’s freshly-invigorated Manchester United in August.

Liverpool have spent over £100million on freshening up their forward line in 2022. Harvey Elliott continues to be integrated and Fabio Carvalho is another youngster signed with one eye on the future.

Yet the failure to bolster Klopp’s midfield appeared a grave error. And you can see where the critics are coming from.

Milner first stepped onto the pitch in a Premier League match almost exactly two decades ago. To put his longevity in context, Nigel Winterburn – who turns 60 next year – was playing in the West Ham backline when he made his debut for Leeds. Foden was two years old at the time. Elliott was not yet born.

But with the stretched muscles and creaking limbs comes experience. Only Frank Lampard, Ryan Giggs and Gareth Barry have made more Premier League appearances. Milner is one of only a handful of active players that shared a pitch with the likes of Thierry Henry and Alan Shearer.

And that experience can come in handy. Many feared the worst when the 36-year-old was once again named at right-back, directly up against Foden, in Sunday’s crunch match at home to City. Yet Milner dug in and totally shut down his prodigiously talented opponent.

Perhaps there’s still some use for old geezers after all.

“I’m pretty sure before the game a lot of people thought, ‘James Milner against Phil Foden?’” 🔴 pic.twitter.com/TjzifFt5P6

Meanwhile, just down the M62, Cristiano Ronaldo – who made his professional debut a few weeks before Milner – is uncomfortably grappling with his advancing years.

Unable to stomach being deemed redundant as an unused substitute in Manchester United’s 2-0 win over Tottenham, Ronaldo flounced down the touchline and reportedly left Old Trafford before his victorious team-mates returned to the dressing room.

You can’t imagine such histrionics from Milner, who has a well-earned reputation as one of the Premier League’s most selfless and professional servants. Whether he’s watching from the bench, slotting in against the champions or being called upon to help see out a game, he’ll do his utmost to make himself useful.

That was certainly the case with a late 10-minute cameo in Liverpool’s 1-0 victory over West Ham last night. During those limited minutes, Milner made an intervention that was just as vital to the three points as Darwin Nunez’s goal or Alisson’s penalty save.

Still wrapping our heads around this block from James Milnerpic.twitter.com/2iq9ViQFmU

David Moyes on his haunches on the touchline said it all. Tomas Soucek was stood in the six-yard box and had the simplest tap-in after Jarrod Bowen’s cutback. A certain goal.

Except it wasn’t. Because Milner’s years of experience led him to be positioned in the right place at the right time to snuff out the danger. Because he’s sprightlier than he looks, with the reaction speed and ability to stick out a limb and block the shot.

“In the end, we needed Ali, we needed Milly’s big toe, we need a couple of things, but overall I think it’s a deserved three points,” Klopp said after the match.

Same as it ever was. James Milner is eternal.

READ NEXT: An XI of players left out of James Milner’s best XI he played with