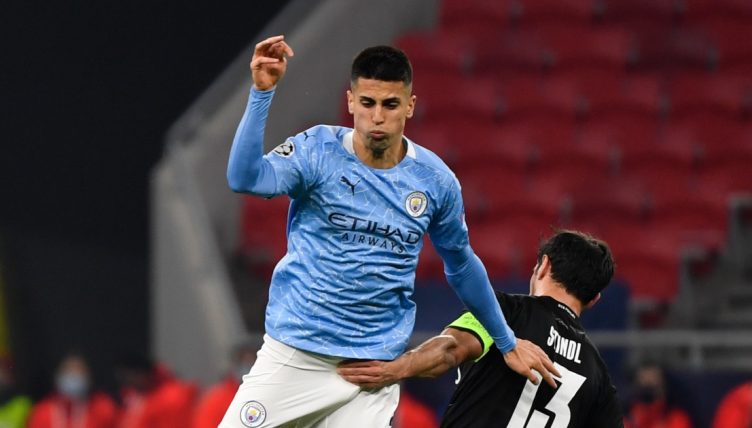 Cancelo arrived at Manchester City in the summer of 2019, and his underwhelming debut season led many to conclude he was simply another indulgence of Guardiola’s full-back addiction.

The doubters couldn’t have been more wrong. During City’s current run of 19 wins in all competitions, which has seen them all but wrap up the league title, Cancelo has re-invented himself as the team’s principal playmaker in the absence of Kevin de Bruyne.

Capable of playing on both the left and right flank, the Portugal international is most devastatingly effective when given the licence to roam centrally.

Covering City’s 2-0 win over Borussia Monchengladbach as a pundit for BT Sport, Rio Ferdinand said:  “He’s playing as a full-back but it’s not the conventional full-back. He ends up coming into the centre of the pitch.

“His position is inside the pitch, almost as a pivot. When they have the ball it’s three at the back with two boys in front of them and he’s one of the boys.

“He’s even into the No 10 position at times and he becomes like a playmaker – it’s crazy to see.”

Not for the first time, Ferdinand demonstrated an impeccable reading of the game. In their Champions League success against Gladbach, Cancelo was City’s standout performer and created both of their goals. It was notable that de Bruyne, the best creative midfielder in the Premier League, remained unneeded on the bench.

The first assist was described by the BT pundits as ‘perfect’. Drifting in from the left flank, Cancelo whipped a delicious cross towards the back post that was gratefully headed home by compatriot Bernardo Silva. With service like that, Cancelo could conceivably moonlight as a waiter at the Ritz.

Joao Cancelo with the perfect assist 🎯

On a plate for Bernardo Silva who heads it home at the far post! 🙌

The second goal was, if anything, more thrilling. Raheem Sterling dragged two Gladbach defenders to the byline before finding Cancelo in acres of space on the edge of the penalty area.

The 26-year-old drove a deep pass towards Silva, who cushioned the ball across goal for Gabriel Jesus to tap home the goal that probably confirmed City’s passage into the quarter-finals.

Cancelo’s pinpoint diagonal was emblematic of his performance, throughout which he roasted his opponents like a Jersey Royal.

Gabriel Jesus scored his 2nd UCL goal of the season tonight in a 2-0 win over Borussia M'gladbach pic.twitter.com/WYkqD6RS9t

It helped that by this point that Gladbach had, in the words of The Guardian’s Jonathan Liew, began to ‘disintegrate like a Wallace and Gromit contraption’. But the German club ousted Inter Milan in the group stages and showed they were technically adept on the ball last night.

Their problem was that City rarely allowed them possession. On the rare occasions where Gladbach strung together a few passes, a Cancelo-led City pounced upon them like lions attacking a defenceless human in their zoo enclosure.

American author Mark Twain once said there are two important days in your life; the day you are born and the day you figure out why.

On this evidence, Cancelo has found his life’s true calling.