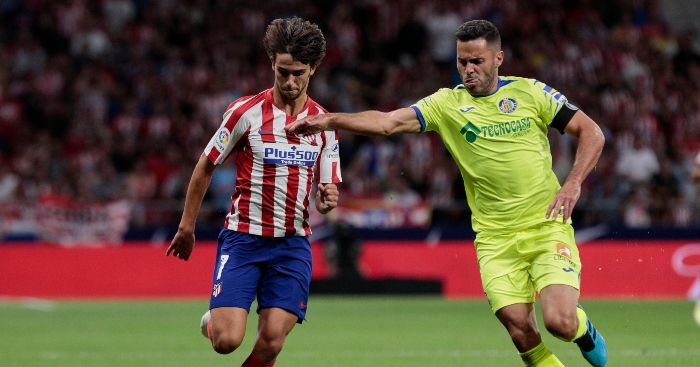 When you command a nine-figure transfer fee as a teenager, you need to make a quick impact. João Félix has wasted no time at all.

The Portuguese forward commanded a €126million transfer fee when he joined Atlético Madrid from Benfica, and that’s a huge fee for a player with just one international cap, whatever way you look at it.

It’s the kind of fee that demands development into a generational talent – any less and, as with moves like Denílson’s to Real Betis in 1998, we’ll only see him through the prism of ‘remember when’ pieces.

And with the world waiting to pass judgement, he knows there won’t be much of a grace period so he’s got to work right away.

The scheduling of the opening weekend of La Liga left Atléti rounding off the weekend’s action two days after Antoine Griezmann and his new club Barcelona got off to a losing start, and it almost felt like a deliberate tension-building delay.

João Félix is the equivalent of a critically-acclaimed show on a channel you don’t have finally getting an air-date for terrestrial TV – for many, they only heard about his brilliance – but within minutes of his debut to the mass market, no one would care all too much about who saw him first.

He only lasted 66 minutes before picking up a knock and leaving the field, but he still produced the most exciting moment in the game.

The run fits so much into such a short space of time that it feels like João Félix generates his own crescendo, waiting until everyone has had time to rise to their feet before allowing his progress to be halted.

He knows individual moments won’t be enough unless they piece themselves together into a compound. Blink-and-you-miss-them nutmegs can pass by your less attentive fan on their own, but not when they’re part of a run from your own half to win a penalty.

When you have such a high price-tag on your shoulders, it arrives with a free target on your back: the skill is only half the battle when you’re fighting just as hard to avoid being wiped out by defenders keen to cut off potential shame at the source.

On this occasion, Getafe captain Bruno is the one to eventually wipe him out, in an intervention designed as much as anything to ensure he no longer has to sprint flat out to even get near a man whose motion comes much more easily.

Bruno’s pursuit feels like a metaphor for players in their mid-20s chasing their youth in an effort to slow the passage of time. You can cling on to the hope for a little while, but eventually you have to make a concession to logic and find a new battle to wage.

Cmon Joao Felix, these people have family too. pic.twitter.com/a3x4xDbCYE

All of this is not to take away from the nutmeg but rather to contextualise it.

You and I might deem it enough to cap off a victorious league debut, but others will want more. Well, now that they’ve got what they asked for, we can return to the moment,

As he prepares to take on Mauro Arambarri, João Félix recalls the trolley problem: as a runaway trolley careens towards five people on one section of the tracks, you have to decide whether to leave it on its journey or act to change its course, guaranteeing the death of a single person on the other part of the track. The difference for João Félix, though, comes from needing to determine whether he should settle at one victim or ensure as many deaths as possible,

Fayçal Fajr tries to protect his midfield colleague by wiping out the Atleti man as early as possible, only to end up being forced to shuffle off and leave João Félix too it – it’s the equivalent of a cornered superhero ducking the attack of one henchman and watching them careen into another.

The one-on-one battle with Bruno looks like a natural next step, but it doesn’t become that easy without a shift to the right so subtle you don’t notice at first glance just how hard he has to work to make it look so easy.

He’s created a new solution to the trolley problem, whereby he sends another train along the tracks from a third direction and jumps off the tracks at the last second before the two collide, with the debris crushing the six others in the distance as he rolls to safety.

We won’t be allowed to get over-excited by this one performance, and nor should we be.

João Félix is a player we won’t be able to judge off the back of one game alone, or even from a string of games – his profile means he’s expected not just to be great but to be the best, which is a lot to ask of someone so young.

Still, he’s clearly not afraid to try – hopefully the rest can follow.

Denílson: From the world’s most expensive player to snubbed by Bolton