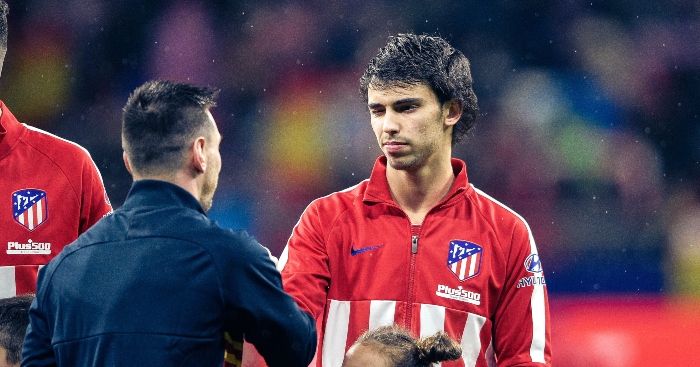 The club-record signing has been eased back into the starting line-up since returning from his latest injury, playing 15 minutes against Granada and 36 against Juventus, so Simeone may have always planned to withdraw him before the 90 minutes were up.

However, for nearly 70 minutes against Barcelona, the Portuguese youngster was getting fans off their seats in the manner many hoped when he arrived from Benfica, and one moment in the first half stood out more than any other.

When Simeone’s team paid more than £100million for Joao Felix, at the time still a teenager, there was never a worry about age translating to unreadiness.

After scoring 15 goals in the Primeira Liga last season, he was already on course for the Golden Boy award, and would ultimately get over the line in that regard.

Part of the justification for forking out nine figures on a teenager came from the disrespect he’d likely be willing to show to those who might feel they deserved more reverence.

We saw it on his La Liga debut against Getafe, when he ran half the length of the pitch to win a penalty, and we saw it on an even more striking level against Barcelona when he took on Gerard Pique and didn’t just win but won decisively.

This is Joao Felix arriving at a new school and punching the biggest kid in the playground square in the face.

He takes a quick look over his shoulder as the ball is played into his feet, allowing him to recognise Pique is approaching, but at no point does he then look for an out-ball.

Next time there’s a chance to take him on, there might be cover behind or he might be less rash. It doesn’t matter if there’s no time to compose yourself or even vomit away the nerves – sometimes you just need to act on instinct to get the best results.

But what about the consequences, I hear you cry. Well, you’ll be dealing with them regardless, so why not try to sneak in something positive when the narrative is in your control as much as it will ever be?

Pique’s response carries an element of instinct, too. However, as with Joao Felix’s initial nutmeg, that instinct is a byproduct of a mindset which long predates that individual moment.

The Spain defender has built up an image for himself as the natural heir to Carles Puyol, Barcelona’s unflappable master and former captain. For all his grace carrying the ball forward, Pique needs to be solid at the back for his own sake and his own reputation.

In short, if he’s getting nutmegged at all – and ideally he isn’t – that nutmeg won’t be part of something bigger. He’ll allow people to remember the moment in itself, but for his own sake it needs to be both the start and the end.

He is forced to sacrifice his pride for a matter of minutes to ensure it’s protected for the longer term. He saw what happened to Getafe and he knows damn well he’s not letting it happen to him.

It’s less a foul than an outright bear hug, as if the defender is trying to contain Joao Felix’s entire future rather than merely holding up the run.

It’s akin to a cop tackling a burglar or a supervillain trapping a hero within his lair. By exaggerating his actions and providing a scenario which feels so clunkily out-of-place on a football field, he tries to incept the idea that no part of the sequence belongs, including the initial humiliation.

Sure enough, when we look back at this game at the end of the season, Lionel Messi’s winner – not Joao Felix’s moment in the sun – will be the first port of call.

We already knew Joao Felix is the future and Gerard Pique will soon be the past. This would have been true with or without the nutmeg. However, the beauty of the move comes in how visible it makes the tug-of-war between the two.

Just as Pique remains at the top by refusing to give in to father time without a fight, Joao Felix has risen so rapidly because he clearly has no intention of simply waiting for his turn in the limelight.

This is a sport where historians can pinpoint shifts from one dynasty to the next with ease, but the line is often more jagged than straight. Messi’s goal demonstrated we’re not yet ready to wave goodbye to one of the best clubs of the 21st century, but we don’t even need to take a microscope to the season in order to see the cracks.

Barcelona might have won this time, but you can only contain Joao Felix for so long.