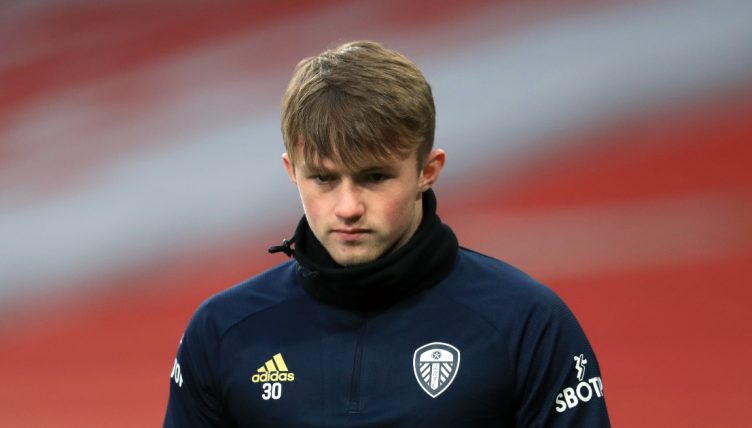 Leeds United fans can breathe a sigh of relief that their top-flight status is all but confirmed for another year.  As a result, attention is quickly turning to next season and beyond already.

Among all the usual transfer gossip chatter, there is plenty of excitement about the club’s youth ranks, with the Premier League 2 Division 2 title and promotion imminent for the Under-23s.

There’s a lot expected from the likes of Cody Drameh, Sam Greenwood and Crysencio Summerville, but the name on everybody’s lips is Joe Gelhardt.

Signed from beleaguered Wigan Athletic last summer, who were forced to sell their prized asset after going into administration, Gelhardt already had a blossoming reputation at his boyhood club.

Latics boss Paul Cook deemed him good enough to feature at senior level with a debut shortly before his 17th birthday, and the young forward was handed a further 18 Championship appearances last season before he crossed the Pennines to Elland Road.

Leeds have taken a more patient approach. A handful of appearances on the bench are as close as he’s come to Marcelo Bielsa’s first team, but that hasn’t tempered the hype.

Gelhardt was put through his paces with the first team in Bielsa’s infamously gruelling pre-season and into a holistic top-to-bottom approach in which Mark Jackson’s Under-23s are schooled to play with the same high intensity, positionally sophisticated hallmarks of the senior set-up.

There are already hints of Gelhardt becoming a young Bielsista, not least with his tireless tracking back, snuffing out danger in his own penalty area in the 88th minute of a 7-1 mauling of Fulham in December, having scored the sixth a few minutes prior.

Being a tireless workhorse is non-negotiable if Gelhardt is to make the step up into Bielsa’s team, but it’s his technical ability with the ball at his feet that has him knocking on the door.

What he’s done with the Under-23s certainly hasn’t gone unnoticed by the legendary Argentinian tactician.

“He’s a player that always creates danger in a game,” Bielsa told reporters when asked about what the youngster can offer.

“He’s a player who’s more linked with the finalising of chances rather than the creation of them. He has resources to beat an opponent and he has a final shot, a finish that is very good.”

Joint top scorer in the Premier League 2 Division 2 with 11 goals alongside Aston Villa’s former Barcelona starlet Louie Barry, Gelhardt is a natural in the penalty box.

With a stocky build, low centre of gravity and a lethal ability to unleash shots at goal, it’s not difficult to see why he’s garnered comparisons to fellow Liverpudlian Wayne Rooney. His opener against Wolves was just one of several examples of his dead-eyed ability when given an inch.

He’s blessed with strength, acceleration and a rugged tenacity makes him a real handful for opposition defences. He’s able to wriggle out of tight spaces to get his shot away or dispatch the ball to others.

Performing at such a consistent level in the youth ranks, frequently looking the best player on the pitch when he turns out for the Under-23s, it’s increasingly clear that Gelhardt’s first and only goal for Wigan – against Hull City back in September 2019 – was no fluke.

The touch, the turn, the finish… 👌

The way he drifted into a pocket of space, took a touch before quickly turning past his man and evading another, before putting everything behind the ball. The way the dumbfounded Hull ‘keeper just stood helpless as the back of the net rippled between him. You can only draw one conclusion: the kid’s got lightning in a bottle.

Having predominantly featured in a No.10 role during his first-team appearances for Wigan, Gelhardt has often been tasked with leading the line for Leeds’ Under-23s this season, interchanging the two positions with boyhood England Under-16s pal Greenwood.

That versatility and adaptability, able to either deputise for or support Patrick Bamford, will no doubt endear him further to his manager.

The likes of Aymeric Laporte, Benjamin Mendy and Ander Herrera have all waxed lyrical about the role the Leeds boss played in their rises to the top, while he’s continued to call upon the youth at Elland Road.

In Gelhardt, Bielsa has a special talent on his hands. Given the esteemed coach’s record of developing players, there’s no telling where he can go from here.