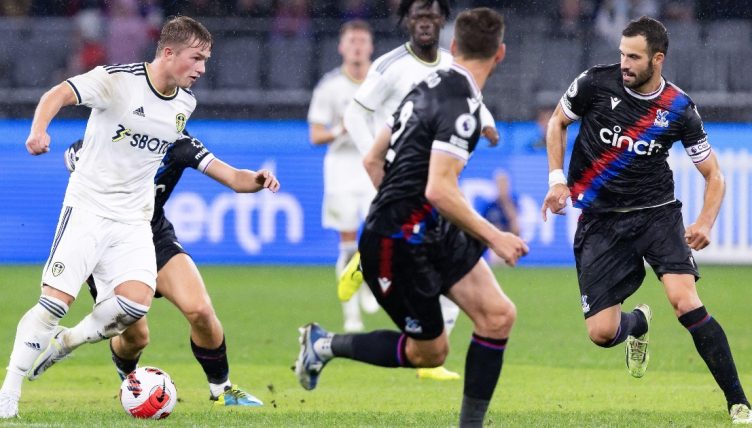 Joe Gelhardt was only on the periphery last season at Leeds United but the club wouldn’t still be in the Premier League without him.

The youngster was signed for a £1million fee from administration-hit Wigan Athletic in the summer of 2020.

He’d already had some senior experience in the Championship with the Latics, but spent his first year at Elland Road developing with the Under-23s.

Marcelo Bielsa’s first team took to the Premier League like a duck to water, so there was no real clamour for him to feature – particularly with Patrick Bamford banging them in – but it was clear from his performances in the youth set-up that Leeds had a special player on their hands.

That all changed in year two as Bielsa’s men suffered a classic case of second season syndrome and Bamford spent most of the campaign out injured. Leeds were crying out for inspiration and time and again their magic little Scouse teenager delivered when called upon.

Gelhardt showed that pressure doesn’t faze him on only his third first-team appearance for Leeds. He darted brilliantly into the box and won a last-minute penalty against Wolves, with Rodrigo converting to make it 1-1 back in October.

He then scored his first Premier League goal with a late equaliser against Chelsea. True to form, Leeds went and conceded a penalty to lose it 3-2 just as Gelhardt’s influence inspired belief they might actually nick it at Stamford Bridge.

Four of Leeds’ nine league wins last season came via injury-time winners. 11 of their 38 points were won past the 90th minute. And more often than anyone else, it was Gelhardt making the difference in those clutch moments.

Against Norwich, he poked home a tap-in for a vital last-minute winner, having set the move underway by somehow beating Ben Godfrey in an aerial challenge.

In the penultimate game of the season, he did superbly at the byline to beat a couple of Brighton defenders and float the ball in for Pascal Struijk to nod home, keeping a flicker of hope alive going into the final weekend.

“It was a very special play, really incredible. Joffy [Gelhardt] has that ability and he grew into the game more and more,” Jesse Marsch told reporters after the match.

“Obviously where we are, we need him and it’s great to see him have a confident performance, especially as the game goes on. He made a massive, massive play for us.”

Looking at the mix of temerity and technical ability required to pull off an assist like that, you actually believe Gelhardt when he speaks of modelling his game on Lionel Messi.

Given those last-gasp contributions and the direct hand he played in Leeds’ survival, it already feels like he’s well and truly arrived.

But he only turned 20 in May. He only has five Premier League starts under his belt and notched up fewer minutes last season than Tyler Roberts, who has since been loaned out to QPR.

There’s still so much more to come, and the 2022-23 season could be the one Leeds fans have been waiting for since he first signed as a cherubic 18-year-old. The one where he goes stratospheric.

3' Close! Great build up from Roca and Firpo, Gelhardt has the ball in the net, but it's ruled just offside. 0-0 pic.twitter.com/elZQSbNC3s

Everything looks to be moving in the right direction for Gelhardt. He’s looked sharp and confident in pre-season and seems to perfectly fit the football his manager is looking for.

Marsch’s Leeds didn’t look especially convincing in the relegation run-in last season, not least because you got the sense the players needed time to be reprogrammed away from Bielsaball and toward something completely different.

They never quite looked like they knew what they were supposed to be doing in the former Red Bull Salzburg coach’s more narrowly-focused gameplan.

On that front, there have been notable signs of improvement in the summer friendlies and renewed hope that things might just click. And Gelhardt is buying into it.

“That’s what we’re told to do. It’s good for strikers. He wants us in the right positions, scoring goals. I like the tactics.”

Gelhardt’s already demonstrated his lethal attacking instincts and intelligent movement, always on the last defender’s toes with a willingness and availability to latch onto the vertical through-balls that have been a hallmark of Leeds’ pre-season performances.

Not only that, but having been whipped into shape at Bielsa’s boot camp upon arrival at Leeds, he possesses the fitness, athleticism and tenacity to fit into Marsch’s aggressive counter-press.

Like so many others at Leeds last season, Gelhardt’s progress was often stunted by knocks and niggles. Just as it looked like he was ready for a run in the team, something would keep him out.

Bamford’s injuries gave opportunities to the young attacker last season, but the Leeds No.9’s return to full fitness need not block his pathway.

In fact, Bamford and Gelhardt have only spent 32 minutes on the pitch together in total. That was in a dismal 3-0 defeat to Aston Villa in one of Marsch’s first games in charge, but there’s every chance the two forwards can complement each other.

That could be up top together at the tip of a 4-2-2-2, a formation Marsch has used extensively at his former clubs. It’s also a system that Southampton boss Ralph Hasenhuttl has – at times – implemented successfully in the Premier League.

Or it could be in a 4-2-3-1, which is the formation that’s predominantly been used by Marsch in the summer friendlies, most notably in the final pre-season run-out against Cagliari.

On that occasion, Rodrigo was used in the No.10 slot behind Bamford – with the pair notching three and two goals respectively in a 6-2 win – but Gelhardt has the ability to challenge the Whites’ record signing for that place on the teamsheet.

Similar to the goal that was ruled out against Brentford, Gelhardt takes receipt of the ball and his first thought is fashioning a shot at goal. Good centre-forward instincts, great power and swazz on this, too. pic.twitter.com/qiQDauDOjL

Perhaps most importantly of all, his future is settled.

A new five-year contract extension that runs to 2027 is evidence of how highly Leeds value their star asset. It’s a huge show of confidence in the 20-year-old being a major part of the club’s plans going forward.

“It was difficult at the start physically getting used to the style of play that the fans expect and the managers expect. But I’ve enjoyed every minute of it, I’ve enjoyed the challenge of stepping up from the 23s into the first team.

“Playing in the Premier League was my dream so I’m thankful to the club and everyone involved who gave me that opportunity and I’ll continue working hard to help the team as much as possible.”

Gelhardt has everything in place to reach his frightening potential.