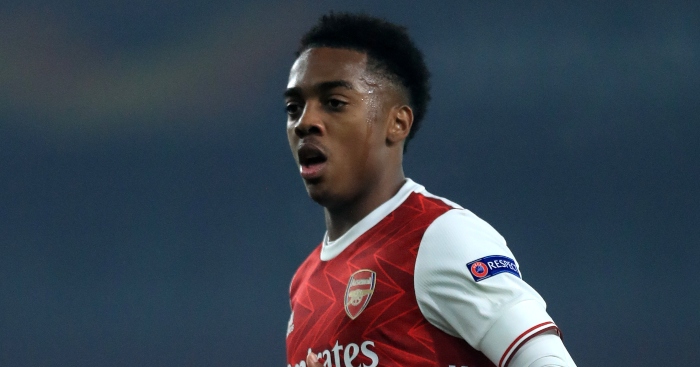 Mikel Arteta has a plethora of options at his disposal, having strengthened across his Arsenal squad, though that is especially clear in attack and midfield.

That point was accentuated after the Gunners’ Europa League win over Dundalk, as, despite impressing in the game, neither Reiss Nelson or Joe Willock were included in the matchday squad against Manchester United.

While Nelson was once again left out as Arsenal beat Molde 4-1, with Arteta putting out a fairly strong side, Willock started among some of his more recognised team-mates.

It was undoubtedly an opportunity for the 21-year-old to show that he should be featuring in the Premier League, or making it onto the bench at the very least, and it is one that he took with open arms.

Joe Willock’s amazing performance again Molde, one of the brightest talents in the squad pic.twitter.com/BVly5JLW9u

The midfielder’s most obvious contribution is his goal – Arsenal’s fourth and final one of the game – as he was played in by Nicolas Pepe, took a touch away from his marker and gave the goalkeeper no chance with his strike.

He did also play a key role in both of Molde’s own goals. The first, scored by Kristoffer Haugen, was the much-needed equaliser, and while Eddie Nketiah will get much of the plaudits for his burst forward and pass, Willock’s pressure and persistence is what really forced Haugen into the mistake.

Then, for the second, which was put in the net by Sheriff Sinyan, he showed great movement to play a one-two with Granit Xhaka, before putting in a dangerous ball that forced the Molde man into making a decision, as two Arsenal forwards were waiting behind him for a tap-in.

There were some superb touches shown throughout the game, as highlighted in the video above, while there were also great deliveries into the box – even if his team-mates weren’t quite able to get on the end of them.

Another impressive aspect of his game was how he was able to keep the ball under his spell in tight spaces, displaying great composure and awareness.

He also put in some good work without the ball, using his body well when defending, which helped him to pull off three successful tackles throughout the game – only Molde midfielder Etzaz Hussein made more.

Willock undoubtedly made a massive contribution to securing the victory, so he will surely have got himself into Arteta’s thoughts this time around.

With one mazy dribble, Reiss Nelson came out of the shadows at Arsenal