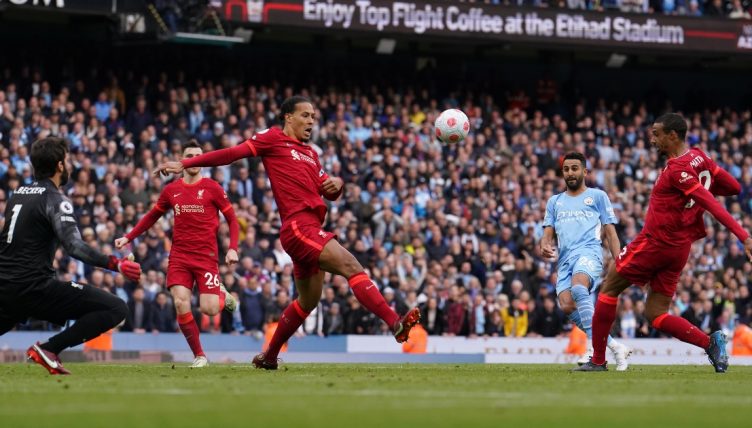 It was the slightest of touches: a faint deflection, almost imperceptible in a frenetic, high energy game. But it was a touch nonetheless.

No one really noticed it at first. The attention was on what appeared to be a big missed opportunity for Riyad Mahrez. He had been set through on goal, cut onto his left foot and floated the ball over Alisson but beyond the crossbar.

Without Joel Matip’s intervention, though, Manchester City might have been celebrating a late winner, a winner that would have effectively sealed the title. This was a huge moment.

And it wasn’t Virgil van Dijk at the heart of it. Nor was it Alisson, or Trent Alexander-Arnold, or any of the other Liverpool players routinely hero-worshipped – and deservedly so – by the club’s supporters. It was Matip.

this looked like a bad miss from Mahrez but it's actually a ridiculous block from Joel Matip that probably saves a goal. A massive, match-winning, likely title-winning goal.pic.twitter.com/Dsf3N5WVJC

Occasionally ungainly and often maligned for a perceived awkwardness to his game, Matip has rarely been singled out for praise. Not, at least, until a few months this season, when there was a collective realisation that he is, in fact, an excellent defender.

Plenty expected Ibrahima Konate to slot into Liverpool’s back four alongside Van Dijk, and he has done so impressively in the Champions League. In the Premier League, though, Matip has become as reliable and sturdy as the Dutchman by his side.

There is an air of composure about Matip. Though his limbs may seem unwieldy, he moves with surprising gracefulness, gliding across the pitch, making vital interceptions and challenges.

Injuries, of course, have been a recurring theme of the Cameroonian’s Liverpool career. He has made 25 league appearances so far this season and is on course to beat his highest total of 29 in 2016-17, his first season at the club.

As a result, Matip established a reputation as unreliable. He was unavailable for large periods of last season when Liverpool were forced to play Jordan Henderson and Fabinho at centre back during an injury crisis that brought Nat Phillips and Rhys Williams to the fore.

After that particularly stressful period for everyone associated with Liverpool, this season has seemed remarkably uneventful. The reassuring presence of Van Dijk and Matip together has been a constant. And the consequence is a stingy defensive record of 22 goals conceded in 31 matches.

It hasn’t gone unnoticed. Matip was the Premier League’s player of the month for February, recognised ahead of the goal scorers and creators in the division.

“He obviously (doesn’t) get a lot of headlines,” Jurgen Klopp said. “I am not too much into individual prizes for football players, but if someone should win it, then I think it makes real sense it is Joel. It is really cool.

“Believe me though, if there is one person on this planet who couldn’t care less if we all underrate him, it is Joel Matip.

“Honestly, he doesn’t realise it. He is just happy to be with these boys and playing football.

“He is a really smart person, but not in these kind of things where he thinks ‘oh I should have another status’. Not at all, that is why everyone was so happy that he got it.”

Recognition is always nice, even for the most modest, unassuming footballers. Based on Klopp’s description, Matip seems to be that kind of character.

But it is a trait indicative of this Liverpool squad. There is no individuality, no egotism. Instead, there is an inherent selflessness. Every contribution is made for the good of the team, every accolade and award taken in the context of the collective.

If Matip’s block to deny Mahrez in injury time helps Liverpool to the Premier League title, he will not care if anyone noticed it.