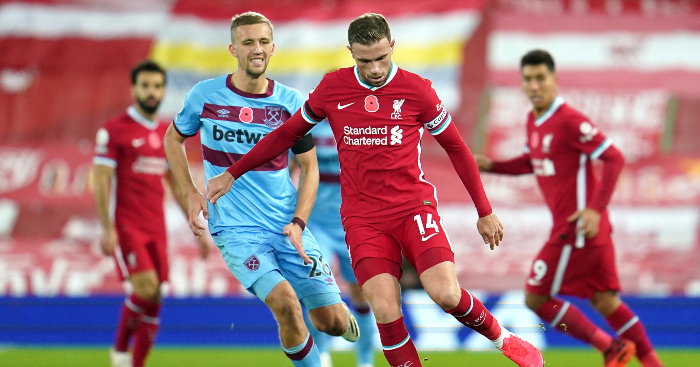 First there is the boy from the Basque Country, all laid-back, majestic brilliance from the fulcrum of midfield.

Then there’s the ruddy-faced Mackem, whose game is characterised by hustle, bustle and hard work; a man who has been written off so often that captaining the Reds to domestic, European and worldwide glory is viewed as the final act of an underdog story rather than a reflection of his remarkable talent.

In sharing the same squad number at Anfield, it’s tempting to think of Alonso and Henderson as the two opposing circles in a Venn diagram. Crucially, however, there is that space where the two overlap.

Just as Alonso, sadly, occasionally had to break sweat, Henderson regularly reminds us of the unavoidable fact that – sorry to break it to you – to be a professional footballer, and certainly to enjoy the success he has in recent years, you have to be genuinely really good at football.

Let’s face it, it’s a tragedy for shitkickers like us to accept, but sometimes you’ve got to swallow your pride and accept the truth: we can only dream of being as good at football as Jordan Henderson.

We’ve actually written before that some of Henderson’s passing could make Alonso go weak at the knees, and the England international was at it again during Liverpool’s 2-1 victory over West Ham on Saturday.

Liverpool left it late to secure all three points against the Hammers, courtesy of Diogo Jota’s 85th-minute winner. That winner could have come much earlier had Andy Robertson made more of a gorgeous sweeping pass from Henderson that allowed the left-back to get in behind West Ham’s defence.

Alonso would no doubt have been stroking his chin and nodding his head if he was watching. If Henderson starts matching his predecessor’s goals, then we really need to worry.