The star of Euro 2020 so far? Jordan Pickford and his Samson-like hair 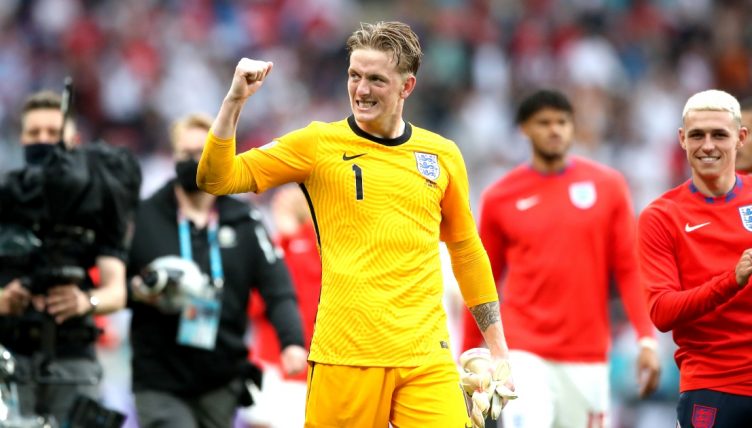 Sometimes it’s the littlest changes that can have the biggest impact.

Swapping chips for a side salad. A new jacket that compliments your favourite pair of jeans. Acquiring some incense sticks to raise the level of Feng Shui in your bedroom. Or it could be getting a new haircut.

At which point, let us introduce Jordan Pickford.

It doesn’t feel so long ago that every barstool pundit in the country was calling for Gareth Southgate to drop Pickford, whose form at Everton often veered between brilliant and baffling.

And here we are now, with the 27-year-old having just become the first goalkeeper to keep four clean sheets during the opening four matches of a European Championship.

Pickford himself has credited the influence of working with a sports psychologist, allowing him to become more assured and minimising the skittish moments that have dominated perceptions of the goalkeeper.

That theory certainly holds merit – anybody who saw Raheem Sterling receive the mutter und vater of all castigations after gifting possession to Germany seconds before Thomas Muller’s astonishing miss can testify that Pickford has no problem holding his team-mates to account.

🇩🇪🤯 An UNBELIEVABLE miss from Thomas Muller in between England's two goals…#ENGGER pic.twitter.com/8CgKRRY6r0

But maybe his upturn in form can be partly explained by his new slicked-back haircut.

Speaking before the Czech Republic game, Pickford said: “Mase (Mason Mount) was telling me to get a slick back, so I thought I’ll just let it grow and see what happens.

“I felt like I’ll keep it, better than a short back and sides!”

We all know from experience that a decent trim can elevate a person’s self-confidence, fuelled by the renewed belief in our own attractiveness.

And that 1% boost, alongside the faith shown in him by Gareth Southgate when bloggers nationwide were shouting for Dean Henderson, has been enough for Pickford to be one of England’s standout performers of Euro 2020.

During the tight and tense tussle with Germany (did we honestly expect it to be anything else?), Pickford was not required to make a string of saves as England exuded a level of control normally associated with more successful sides.

But he was called upon to make two crucial saves that gave England the platform for their second-half heroics.

Thirty minutes of not very much had passed when Kai Havertz collected the ball and slipped it through to club team-mate Timo Werner in the six-yard box.

Many Premier League followers will have been pleased that the chance fell to the toaster-toed Werner. But the Chelsea striker did everything right here, hitting his shot hard and low as every coaching manual instructs.

He reckoned without Pickford. Spreading his limbs like an octopus during an intense game of Twister, the Everton man blocked Werner’s effort and the watching nation breathed a collective sigh of relief.

Brilliant save by Pickford! ✋

That’s travelled through the smallest gap at a ridiculous pace 🚀pic.twitter.com/oHGywqB6eo

If that save emphasised Pickford’s smothering skills, his next big moment highlighted his agility and quick reflexes.

Germany started the second half stronger, building play from the back and attempting to draw the English defence out of their entrenched positions.

A scramble ensued outside of the penalty area, the ball determinedly avoiding any one player in the manner of a new arrival assessing their options on Love Island.

It eventually fell to Havertz. Arguably Germany’s best player on the day, the forward set himself and unleashed a rasping first-time shot that replays showed was destined for the roof of Pickford’s net.

Again Pickford rose to the challenge. Despite having less than a second to think about it, he flung himself instinctively at the rising ball and did enough to tip it over the crossbar.

England went on to secure a famous 2-0 victory and the nation bathed itself in congratulatory lager. The sky appears to be the limit now the national team have beaten an elite opponent in a tournament knockout match.

It may even be coming home. Maybe.

For all the expectation that England would blow opponents away with their enviable attacking options, this campaign has been built on an impregnable defence and a sense of self-belief that treats outside criticism as background noise and keeps faith in their own methods.

With his Samson-esque haircut and impressive performances, Pickford embodies this new England better than anybody.