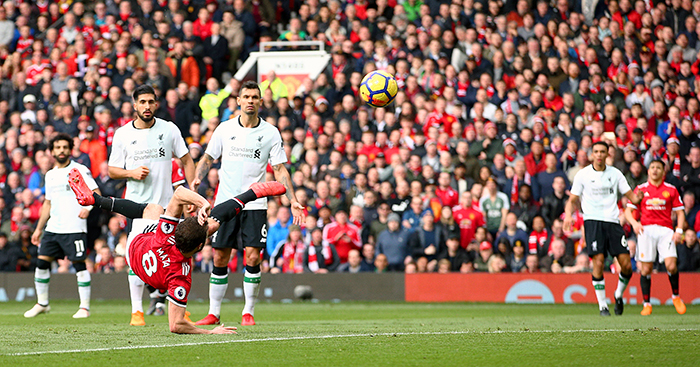 Juan Mata might not have scored with his bicycle kick in Manchester United‘s win over Liverpool, but the fact he attempted it in the first place is much more important in the grand scheme of things.

We’re approaching crunch time in the Premier League season, where games can turn on the smallest moments.

Gone is the need for pretty football. All that matters now is scoring goals, however scrappy, and picking up the points needed to fulfil an aim, whether survival or European qualification.

Shame no one told Juan Mata.

In a Manchester United squad that has blown hot and cold this season, Mata has been a man they can rely on. You know what you’re going to get from Mata.

Weirdly, despite still being in his 20s, it’s hard not to think of him as something of a seasoned veteran. Maybe it’s the relative lack of pace in a team capable of devastating breaks; maybe it’s the fact that his four years at Old Trafford legitimately counts as a long time; maybe it’s the hairline; maybe it’s the blog.

Whatever the reason, he has gone from being an explosive game-changer – the man who was a memorable match-winner against Liverpool in March 2015 – to more of a steady, controlling influence.

So, when United and Liverpool met again this weekend, he was meant to be the reliable figure capable of putting his foot on the ball and punishing the visitors, especially when the game was stretched.

Instead, Marcus Rashford was the man who showed the big-match composure required in such a game, while Mata…well, he did this.

The most striking thing about the miss is how in control of the situation Mata seems to be from start to finish.

From the screams for the cross, to the movement across Dejan Lovren’s blind spot, he has the air of a man who has practiced this situation hundreds of times and looks at a bicycle kick in this spot no differently than he would a simple tap-in.

It’s not even that he’s too calm, it’s just that he expects to score, and to score in this exact manner. He has prepared himself to the point where the execution will be the same regardless of whether another Liverpool defender strolls into the picture.

There’s something of the high-jumper about his technique, contorting his body to the point where he acts as his own cushion as he lands, leaving himself with just the easy part to do…yet that’s the part he can’t pull off.

There’s an argument that Mata could – and perhaps should – have brought the ball down with his chest and taken his time to slot the ball beyond Loris Karius in the Liverpool goal.

It’s a noble thought, and on the surface seems like a reasonable line of thinking, but the error is one of execution rather than decision-making.

If this was a different player, one who you didn’t trust as much to pull off an acrobatic finish, then it would be easier to point to a lack of awareness of just how much space was around him.

However, this is someone who, against the same opposition just three years ago, pulled off a finish which was both more complicated and more unnecessarily acrobatic, at a more perilous scoreline.

If ever there was someone you don’t want to question upon attempting this sort of thing against Liverpool, it’s Juan Mata.

Maybe we’d have a different response to all of this had Jürgen Klopp’s team come back into the game more than they did, if they had added to Eric Bailly’s own goal and claimed a point.

It’s easier to forgive a miss when you have won a game, and José Mourinho’s reaction at the time shows he was hardly pleased with the end result of Mata’s attempt.

However, it’s impossible to look at Mata’s failure to score separate from the potential upside of not just scoring but scoring in that manner.

Mourinho’s teams haven’t always gone for the kill early, but United’s win over Liverpool came just two days after the anniversary of his Chelsea team’s famous early salvo to put Barcelona to the sword in the Champions League.

On that occasion, it was a case of ruthless attacking efficiency on the part of Eidur Gudjohnsen, Frank Lampard and Damien Duff, but perhaps the goals weren’t quite embarrassing enough for the visitors to be deterred: Ronaldinho brought Barça back into the game and forced Chelsea to do it all again in the second half.

That can happen with the blink-and-you’ll-miss-it counter of Duff’s goal in that game, but it can be harder to respond when you’ve been humiliated by a piece of individual cherry-on-the-cake brilliance like that which Mata almost achieved.

If Mourinho’s Chelsea left Barça for dead in the manner of a Bond villain, Mata scoring his acrobatic effort against Liverpool would have been akin to murdering the opposition in cold blood and parading their body through the town centre.

Living for the moments

You might claim any football fan who has the luxury of choosing between beauty and results is spoiled, and that most don’t have the opportunity to witness either.

However, if you’re relying on on-pitch success for satisfaction, 99% of fans will almost never be happy. So it’s far healthier to remain invested in the beautiful aspects of the game, the ones which made you love football to begin with.

When you break it down (but please don’t try to break it down too much), you want to have something to justify your love for this sport, and to justify the years of your life dedicated to following your team around and to watching other teams to whom you have no obvious emotional attachment.

While fans of a handful of teams will be able to point towards trophies and the culmination of hard work with deserved or undeserved crucial victories, supporters of the most successful clubs may see these glories merge into one, while those at the opposite end of the scale will need to point to something other than honours lists.

This is where the one-off moments come in: Manchester United fans will have moments like Cristiano Ronaldo’s stunning free-kick against Portsmouth, and Barcelona will have Lionel Messi’s solo effort against Getafe, even though neither was a winner in a crucial game.

In time, United fans will likely group Saturday’s win with a couple of other breakthrough Rashford performances in 2016, but better execution from Mata would have taken it to another level entirely.

And that’s why we should never begrudge him going for the jugular when inflicting a slower death might have been easier.

Where are they now: Man Utd team which won first U21 Premier League