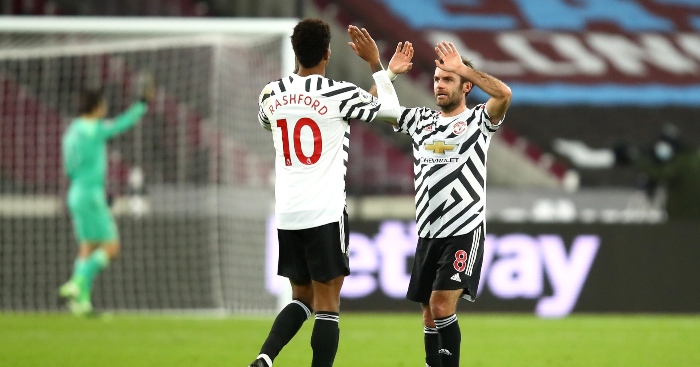 While Bruno Fernandes is the shiny new thing at Manchester United, Juan Mata gave a timely reminder of his brilliance in their win against West Ham.

Since joining United in January, Fernandes has been nothing short of sensational, registering 22 goals and 14 assists in his first 38 appearances in all competitions.

His arrival has benefitted a lot of people at Old Trafford but poor Juan Mata has been put back on the shelf like an old toy that has gone out of fashion.

It’s easy to forget that Mata was once one of the best players in the Premier League, winning back-to-back Player of the Year awards at Chelsea.

Just like Fernandes, the Spain international was part creator and part cold-blooded killer when he first arrived in the Premier League nine years ago.

He scored 33 goals and provided a further 58 assists in all competitions over two-and-a-half seasons at Stamford Bridge before making a surprise £37million move to United in January 2014.

Juan Mata in all competitions this season:

A goal or assist every 110 minutes. 🪄 pic.twitter.com/j9cbEW0HC6

Despite being a popular figure at Old Trafford, the midfielder has never really recaptured the scintillating form he had shown in west London.

Mata continues to find himself on the fringes of the first team under Ole Gunnar Solskjaer but is still highly revered by his United team-mates.

“You say one name with whom I enjoy playing a lot and that is Juan,” Fernandes told Manchester United’s official website in October.

“I think he is one of the smartest players, he knows what I want and how I want to play and he thinks really quickly. Sometimes the point is not being quick but thinking quickly and I think Juan is one of those kinds of players and I love playing with him.”

He started on the bench yet again at the London Stadium before replacing an injured Anthony Martial in the 62nd minute with United 1-0 down.

While Fernandes’ second-half performance stole the headlines, it’s no coincidence that United turned the game around and went 2-1 up six minutes after Mata’s introduction.

Have a good day. ☕️ pic.twitter.com/0OclY3Vkt1

After watching the Portugal international set Marcus Rashford through on goal with a brilliant pass, Mata raised the bar and proved that there’s still life in the old dog.

The 32-year-old spotted Rashford’s run in the corner of his eye and didn’t even take a touch before executing a brilliant first-time pass.

West Ham’s defence were left bewildered by the through ball and the England international dinked the ball over the oncoming Lukasz Fabianski to wrap up all three points for United.

Anything Fernandes can do, Mata has done 100 times before.

These moments of magic have become less frequent in recent seasons, but he can still roll back the years and bring out some of his classics when called upon.