Forget the goal, Jude Bellingham’s roulette told us England were taking the p*ss 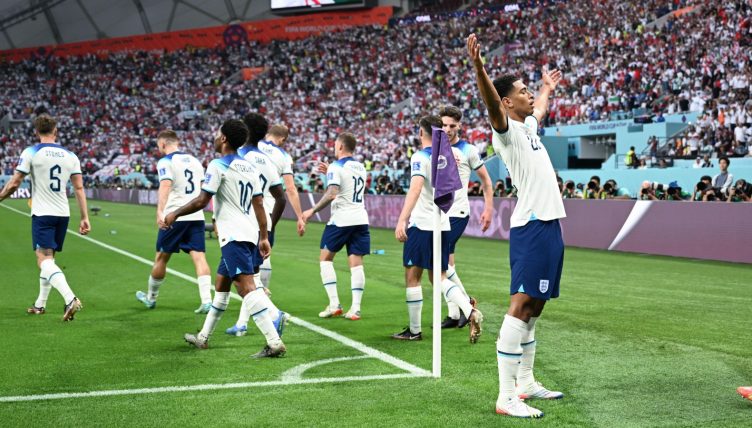 Jude Bellingham was not yet born the last time a teenager scored for England at a World Cup.

The last – and only other – teenage talent to do so was Michael Owen against Argentina at France ’98. In the years that followed, Owen would lift the Ballon d’Or and seal a move to Real Madrid.

England’s latest golden starlet looks to be on the same trajectory. Destined for greatness. Unlike Owen, who peaked for the Three Lions that night in Saint-Etienne, you sense the best is yet to come from Bellingham on the international stage.

Bellingham had not yet made his debut for Birmingham City when Gareth Southgate’s side reached the semi-finals in Russia four years ago. He celebrated his 15th birthday midway through the run.

“Gerrard was probably my biggest one. The character he had was world class and then you add on his ability and it’s a joke really,” the 19-year-old told BBC Sport ahead of England’s Qatar 2022 opener against Iran.

“When your heroes take the time to appreciate what you have done it is really special. I’m not sure how I feel, it’s almost disrespectful for him really with all he’s achieved in the game – to say that after three years we have similarities. I just want to be Jude and go on my own path. What he did was amazing, if I can get close to what he did then I’ve done well.”

Bellingham’s got his head screwed on and is saying all the right things. But it’s not unrealistic to expect him to outshine his boyhood hero in an England shirt.

Gerrard never made it past a quarter-final with England, every summer proving a wretched disappointment as the shirt weighed too heavy. Their array of Champions League-winning superstars have all spoken on the record as to the reasons why.

A remarkable 10 minutes of TV from 3 of England’s ‘Golden Generation’ and the issues they faced in their time as Lions…fascinating TV… pic.twitter.com/ZYy6VB66A2

Paraguay. Trinidad & Tobago. Sweden. USA. Algeria. Slovenia. Italy. Uruguay. Costa Rica. Gerrard made nine appearances in World Cup group stages and each and every one of them – win, lose, or draw – were invariably miserable. Never did it feel like that England were playing with freedom or joy.

In his first international tournament, as a 17-year-old on the fringes of Southgate’s side, Bellingham finished as a runner-up. He was an unused substitute as England toiled against Italy and ultimately endured penalty shootout heartbreak against Italy in the Euro 2020 final.

With a Man of the Match display on his first World Cup appearance for England, you can’t imagine Bellingham watching on from the bench again any time soon.

Iran, coached by spoiler-in-chief Carlos Queiroz, looked every bit the kind of opposition that would’ve sapped any joy or optimism from England’s Golden Generation. But not this lot. And not Bellingham.

The Dortmund midfielder opened the deadlock of an injury-delayed first half after half an hour, doing brilliantly to ghost into the box unmarked and head home without any fuss. It was his first goal for England and a glorious, massive milestone in his young career to date.

Jude Bellingham got England off the mark!#BBCWorldCup #BBCFootball #FIFAWorldCup pic.twitter.com/Gb0rSEkZ59

Then, just a few minutes later, Bellingham drove home how comfortable, nay exceptional, he is at this level.

It wasn’t the silkiest footwork you’ll see at this World Cup, but Bellingham had the confidence to try a roulette turn and evade his man before dispatching the ball and before running back onto the one-two.

He couldn’t quite get onto Raheem Sterling’s pass back but chased it doggedly and nearly kept the ball in play.

After playfully headbutting the corner flag, there was no remonstrating with his team-mate. No scowl. No furrowed brow. Instead, something seldom seen in 2006, 2010 or 2014 – a big beaming smile.

For a long time it felt like an alien concept for England, but here they are, in a major tournament, enjoying their football. Not looking like the weight of the world is on their shoulders. Coming into the World Cup off the back of six games without a win but absolutely unbothered.

It’s no coincidence that within a couple of minutes, England doubled their lead. And then added a third. Then, in the second half, a fourth, a fifth and a sixth.

“We talk about the great midfielders that we’ve played with and seen in England in our generation,” BBC pundit Rio Ferdinand said afterwards.

“Jude Bellingham is a throwback, he can really do it all,” added Jermaine Jenas.

“He’s like Steven Gerrard and Frank Lampard rolled into one.”

It’s testament to Bellingham’s quality that the Gerrard and Lampard comparisons are justified. But there’s one key difference: here he is smiling at a World Cup.