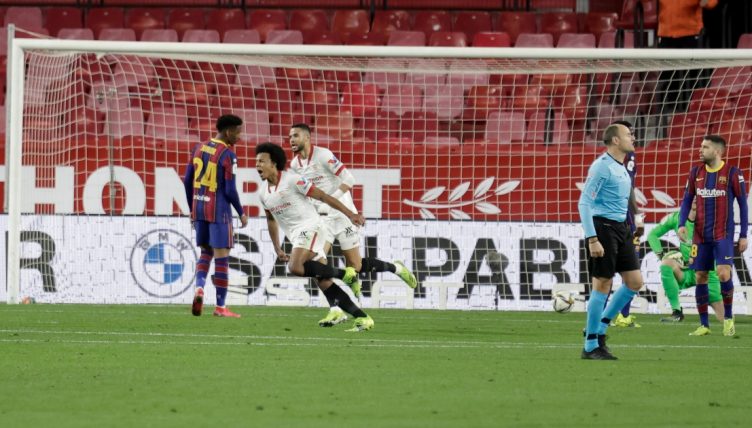 If there’s one thing Chelsea fans love, even more than The Liquidator or celery, it’s getting one over on Tottenham.

Then there was May 2016 and the Battle of the Bridge. Yes, it was hilarious viewing, but the fact is that the worst-performing Chelsea side of a generation raised their game specifically to end Tottenham’s first title challenge in aeons.

And now Chelsea appear to have stolen Sevilla centre-back Jules Kounde from under their rival’s noses, albeit not quite as cheekily as the Willian saga in 2013.

Some will say that a choice between the European champions and a club in the Europa Conference League is a no-brainer. And you can understand where they’re coming from.

But while Chelsea supporters may focus on one-upping Spurs yet again, a player of Kounde’s ability deserves the highest possible platform to showcase his talent.

The 22-year-old is already one of the best defenders in European football after an eye-catching two years in Spain.

His speed, positioning and reading of the game are attributes that set Kounde apart from his peers, and Chelsea will welcome his fondness for bringing the ball out from the back.

The France international demonstrated all this and more with an outstanding solo effort against Barcelona in last season’s Copa del Rey semi-final.

Maurading forward like a Norman soldier advancing on Hastings, Kounde beat two defenders and slipped the ball through the legs of Samuel Umtiti before sliding his finish past Marc-Andre ter Stegen.

The rather excited yelps in the background were the sound of a thousand Premier League fanboys preparing to make Kounde the subject of their next compilation video.

What a goal from Jules Koundé! 🔥

A great individual effort from the Sevilla defender gives his side the lead against Barcelona ⚪🔴 pic.twitter.com/MYgCLZetdK

With some Chelsea supporters expressing regret over the sales of Fikayo Tomori and Marc Guehi this summer, the signing of Kounde should move to placate their concerns.

His purchase was more necessary than some realise – the futures of Antonio Rudiger and Kurt Zouma remain uncertain, while Thiago Silva turns 37 in September. Meanwhile, Kounde can become the bedrock of the Blues defence for the next decade or more.

And Chelsea are getting the epitome of a modern centre-back, as good with the ball at his feet as defending while the opposition have possession. Barcelona can testify to that.

While Chelsea fans celebrate one-upping Tottenham again, it shouldn’t be forgotten that Kounde is an excellent player in his own right.