Julio Buffarini tried a rabona and started a brawl in Argentina 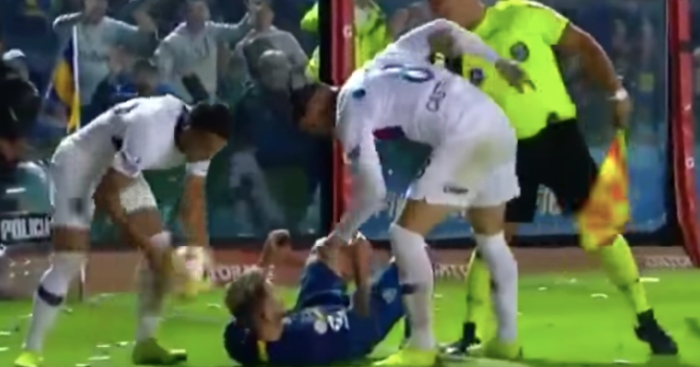 We saw from the goings-on around the Copa Libertadores final between Boca Juniors and River Plate that Argentine football rivalries are on a different level to a lot of what we see in Europe.

It can take the smallest of things – or, sometimes, nothing besides the presence of a fixture – to bring us tribalism at its fiercest.

This sort of thing isn’t even restricted to the supporters, either, as we saw during Boca’s league meeting with another Buenos Aires club, San Lorenzo.

With Boca three goals to the good towards the end of the second half, the showboating began in full force.

Right-back Julio Buffarini came inside from the touchline and decided it was time to attempt a rabona, sending the ball into the visitors’ box.

He failed to find a team-mate with the ball, but after he chased back and gave away a free-kick, he immediately realised the error of his ways.

“I got overconfident, I apologise one thousand times to the players of San Lorenzo and their fans,” Buffarini would later say.

However, this ignores the basic fact that whenever you attempt a rabona, you are acknowledging the disrespect and going down that route in full knowledge of what may await.

We saw this in the Premier League with West Ham’s Manuel Lanzini poking the bear with a rabona against Watford in 2016, enticing the opponents to respond with four unanswered goals, and the brawl on the San Lorenzo goal-line was simply a purer way of expressing frustration at the move.

Buffarini, after all, is a man who played more than 100 games for San Lorenzo in four seasons with the club. Ultimately we have to ask whether he really regrets attempting the rabona or whether he simply regrets that it didn’t come off.

Buffarini now has two options. The first (and more boring) of the two is to save these things for different opposition – perhaps try it in a pre-season friendly, just to test the water.

The alternative, though, is to double down. Next time Boca go head to head with San Lorenzo, even if it’s at San Lorenzo’s ground – nay, especially if it’s there – he needs to back himself to pull off a rabona assist at 0-0.

This first effort is like a kid injuring himself jumping into the deep end of a pool and seeing the pain enhanced when they realise their mum didn’t even see them do it, despite all the shouts for her attention.

Do you try again, aware of the stupidity of the move and the pain it might cause, or do you try it again on the grounds that if you pull off the next time you’ll end up looking really, really cool? We know what we’d go for.