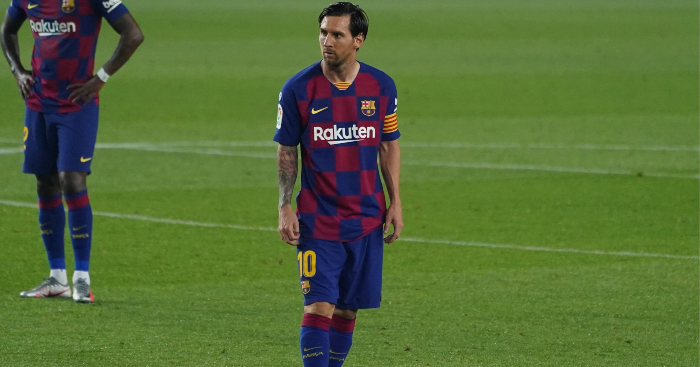 There is little you can rely on at Barcelona these days, except Lionel Messi finding new ways to surprise us with his brilliance.

The Camp Nou is not such a happy camp right now. While Real Madrid have won five consecutive games since football’s resumption in Spain, Barcelona have already dropped points twice, with Iago Aspas’ late goal on Saturday earning Celta Vigo a well-deserved 2-2 draw and giving Real a two-point lead at the top of La Liga.

Ernesto Valverde was sacked earlier in the season only for Barcelona to be spurned in their public courting of Xavi, Ronald Koeman and Mauricio Pochettino. Eventual replacement Quique Setien’s attempts to revitalise the side have been played out against a backdrop of in-fighting, bitching and turmoil.

But amid all the internal strife, the purity of Messi’s preternatural talents is all we ever need as neutrals. One game into La Liga’s return, he was breaking new records, and now he’s re-inventing the free-kick.

Such is Messi’s prowess from any dead ball position within 30 yards of the goal, opposition teams are coming up with increasingly novel ways of trying to thwart the Argentina international.

In Barcelona’s previous draw since football returned, Sevilla took this to the extreme, deploying one player to lie down on the floor behind the wall and another to use the tried and tested FIFA method of sprinting back to the goal-line. Without the latter, Messi would have won the game there and then.

One man lying behind the wall, another sprinting back to the goal line 👀

And they worked for Sevilla this time! 👏 pic.twitter.com/q0uc77xV8N

It is merely a matter of survival for the likes of Sevilla whenever Messi is presented with an opportunity to shoot from the edge of the box.

And so when Celta similarly crowded the goal-line as Messi took aim from 20 yards out, little Leo showed a touch of ingenuity to instead plant the ball onto the head of Luis Suarez, who was being played onside by the defenders on the line.

If you don't let Messi shoot from a free kick, he'll just find another way to create a goal! 😍

With opposition teams going out of their way to spoil his fun and his own club enduring something of an existential crisis, not to mention the national reliance of Argentina, as Messi approaches the end of his career there are times when it feels like him against the world.

It would still take a brave man to bet against him coming out on top.