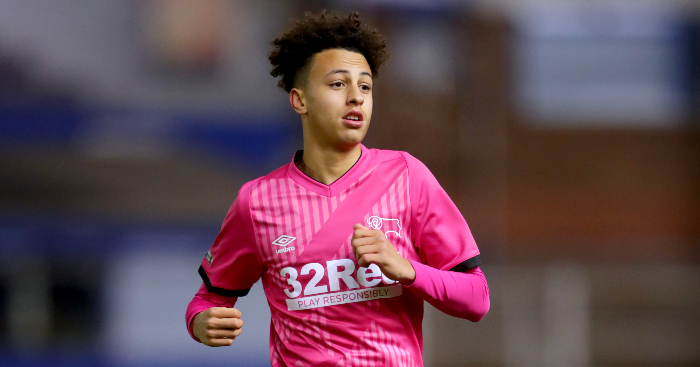 Liverpool‘s senior team may be their most successful in a generation, but the future also looks bright. If reports are to be believed, Derby County’s Kaide Gordon is next to arrive for the production line.

Jurgen Klopp already has 19-year-old homegrown star Curtis Jones playing more of a first-team role this season and Harvey Elliott is tearing it up on loan at Blackburn, while the club are consistently scouting young talent.

Wayne Rooney all but confirmed that Gordon is set to depart the club for Liverpool, but the Derby manager had nothing but good words to say about the club’s rising star.

Having caught the eye in the youth ranks and been invited to train with Derby’s first team, the 16-year-old was handed his first-team debut by Rooney last month, brought off the bench in the closing stages of a 4-0 win at Birmingham.

The starlet’s future was even on the agenda in Rooney’s first press conference after being appointed on a permanent basis, which tells you how highly thought of Gordon is at the club.

“I brought Kaide up with the first team initially to train with us for a week to see how he reacted to it, and he was one of the best trainers,” Rooney said.

“I kept him with us for a couple of weeks and he’s been training at the same level – if not to a better level to a lot of the other [first-team] players. As I said to the players, if you train hard and train well, I will you give your chance. He deserves it.”

🗣 "I have no worries with what's going on behind the scenes. I'm confident everything will get sorted"

Stepping onto the pitch 85 days after his 16th birthday, Gordon became the Rams’ fourth-youngest player of all time. He isn’t able to sign professional terms until he turns 17 in October but is reportedly set to make the Anfield switch as a scholar until then.

Rooney admitted he’d hoped to retain the services of such a prodigious talent but conceded it’s difficult when the Premier League champions make their interest known.

“Kaide is a fantastic player. I brought him into the squad because he was showing the qualities I want,” Rooney added.

From the limited clips available of the England Under-16 international, it’s not difficult to see why Liverpool are interested.

If Elliott is the heir apparent to Sadio Mane at Liverpool, they might just have also found their next midfield maestro in Gordon.

The youngster possesses bags of technical ability, but the thing that most catches the eye is his vision, with one stunning moment standing out in particular from a clash with Cardiff City’s Under-18s.

Spotting a run inside from out on the wing, Gordon perfectly executed a chipped through ball, taking out the Cardiff backline entirely by going over the top, dipping it straight onto the feet of Osazee Aghatise, who could only hit the side netting.

It’s a pass that looked straight out of Klopp’s side. You wouldn’t have blinked had Thiago Alcantara played the exact same pass out to Mane or Mohamed Salah, or even the marauding full-backs Trent Alexander-Arnold and Andy Robertson.

Clips from the same FA Youth Cup game show that it was no fluke. Gordon had already registered two assists by the time he’d played that wonderful dinked ball. In the first, he took two quick touches before playing the ball right through the heart of the Cardiff defence, the kind of pass Roberto Firmino is often crying out to get on the end of.

The second was a curling free-kick, demonstrating he’s got a knack for a dead ball too.

Given his age, there will be plenty more developing to do. Liverpool will no doubt be patient, so don’t expect to see him turning out in the Premier League any time soon.

But he looks to have the raw talent and potential to keep rising, so watch this space. If anything, at least the move is likely to p*ss off Rooney, which should make Liverpool fans warm to Gordon even more.