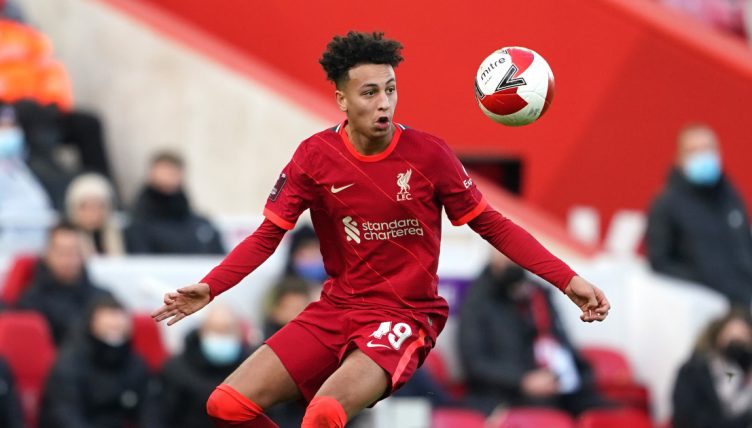 When the teamsheets were released for Liverpool’s FA Cup third-round tie with Shrewsbury, eyebrows were raised.

Of the 11 players in Liverpool’s starting line-up, seven were academy graduates while the bench had a further four.

When Shrewsbury took the lead through Daniel Udoh, those raised eyebrows turned to hands in faces (or jeers amongst the non-Liverpool fans) as the Reds stared down the barrel of an embarrassing third-round defeat.

But then up stepped Kaide Gordon, the youngest Liverpool player on the pitch, with a finish and a goal made in Kirkby.

It’s fair to say Liverpool’s academy has, in recent years, not been considered in the same class as Arsenal, Chelsea, and Manchester United.

Yet Jurgen Klopp’s starting 11 yesterday had an average age of just 22 years and 187 days, the fourth youngest in the club’s history.

With coronavirus stripping the first-team squad to its barest bones and causing the Carabao Cup semi-final to be postponed (although what was that about ‘false positives’ Jurgen?), Klopp sent his Kopite kids from Kirkby onto the field.

They were, of course, joined by a handful of Champions League-winning veterans.

Virgil van Dijk, Andy Robertson, and Fabinho acted as babysitters for the youth players, tasked with allowing the youngsters to play freely.

And boy, did they play freely.

It took them half an hour to adapt to the speed and physicality of a professional men’s game, but after their enthusiasm was honed they were able to display their quality.

One-nil down, Kaide Gordon’s goal in the 34th minute was made entirely by the baby-faced Liverpool youngsters.

Liverpool's equaliser was the first goal in their history where scorer (Kaide Gordon, 17) and assister (Conor Bradley, 18) had a combined age that is younger than James Milner (now 36).

From the stands, their age didn’t show, the way in which they moved the ball akin to watching any number of professional Premier League players.

Morton received the ball from Van Dijk with Shrewsbury firmly contained in their own half.

He fired it past the first defensive line into Dixon-Bonner and pointed to the right flank where Bradley was free but there was no need for Morton to direct; even with his back to goal, Dixon-Bonner instinctively knew where his fellow academy graduate was.

Bradley required only one touch to get the ball out of his feet before putting his foot around the ball and sending it into the feet of Morton at an acute angle of about 125 degrees from where he was standing.

At this point the only indicator these were not Liverpool first-team regulars were the Italian-style numbers on the back, with 45 just having laid it off to 84.

Liverpool’s XI includes plenty of youth against League One side Shrewsbury Town in the FA Cup 👶 pic.twitter.com/cLh9TAq9Do

With one touch the 17-year old set himself up to shoot, Shrewsbury bodies flying at him from all directions. He steadied himself and…

…stopped the ball. Yellow and blue shirts flew past him, expecting to heroically block Gordon’s effort but instead finding themselves halfway to the Liverpool Club Shop for a matchday souvenir.

Gordon needn’t buy one though; he will never forget when he fired the ball low and curling past the Shrewsbury ‘keeper with his left foot.

Kaide’s equaliser, in front of the Kop, made by the kids from Kirkby entrusted by Klopp. There’s a song in there somewhere.

The simple fact is, whether out of desire or necessity, Klopp has entrusted Liverpool’s youngsters in recent years.

He was all smiles in regards to their performance in the FA Cup.

“The boys did really well,” he said after the match. “I am really happy for them. How they contributed today, the first goal was obviously their goal.”

But while the German has called on his youngsters when his senior team was off with Covid or at the Club World Cup, could there soon be an avalanche of youngsters breaking through to the first team proper?

With Liverpool’s now almost trademark aversion to spending, the opportunities for academy graduates to fill in any squad gaps should surely increase.

That, along with some key players being injured or off at the Africa Cup of Nations, means Klopp has the opportunity to back his youngsters again.

Kelleher has made himself the certifiable number two to Allison while Jones has established himself a regular squad player, demonstrating there is a path-way from the academy to the first team, but Klopp must now double down on youth.

If he truly considers them good enough there can be no excuses.

He has a plethora of world-class players at his disposal who, acting as stewards for the youngsters, would allow them to thrive and provide the answers to Liverpool’s problems of depth.

It is up to Klopp if he trusts them enough to take that risk.