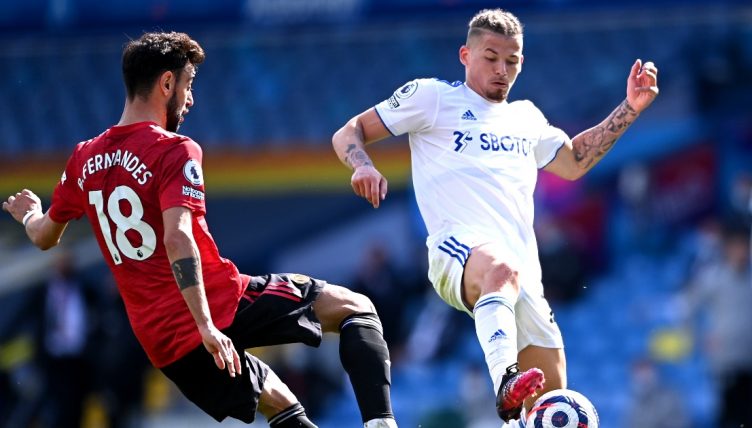 Midway through the first half in Leeds United‘s long-awaited first Premier League clash at home to old rivals Manchester United since 2003, there was a break in play, allowing Kalvin Phillips to share a joke with the man he was tasked with hunting around the Elland Road turf, Bruno Fernandes.

After a couple of seconds, the ball was thrown back into play. Phillips immediately sprang into action, clattering into Fernandes in a bid to regain possession. The moment told you everything about Leeds’ much-loved midfield general.

Five so-called Super League sides have come to Elland Road this season and all of them have failed to come away with three points.

Four different centre-backs have featured in those strong defensive displays, with club captain Liam Cooper partnering Robin Koch in the early-season clashes with City and Arsenal, whereas academy graduate Pascal Struijk has featured alongside Diego Llorente against Chelsea, Liverpool and Manchester United.

Phillips’ presence at the base of Leeds’ midfield has been the common denominator, never shirking a tackle, breaking up attacks, nullifying some of the Premier League’s most dangerous and creative players.

Having already worked wonders to leave the likes of Kevin De Bruyne, Hakim Ziyech and Thiago Alcantara without much of a sniff, the Leeds midfielder was tasked with nullifying the threat from Manchester United talisman Fernandes on Sunday.

🗣 "My task was Bruno, tried to keep him quiet."

Keeping Fernandes, Manchester United’s top scorer (16 goals) and assister (11), quiet is easier said than done, as Phillips himself knows all too well.

The Portuguese playmaker set up Scott McTominay’s second-minute opener in the 6-2 mauling in the reverse fixture at Old Trafford before scoring twice himself. With Leeds 4-1 down at the break, Phillips was substituted by Bielsa.

But Fernandes had no such luck out of Phillips at Elland Road, which tells you everything about the Leeds midfielder’s trajectory. He just seems to get better every week.

On more than one occasion early in Bielsa’s tenure, Phillips was hooked in the first half, but he quickly took the lessons on board to become one of the Championship’s standout midfielders.

It’s been a steeper learning curve in the Premier League, pitting his wits against some of the best players in world football, but he continues to show improvement and will end his first top-flight season knocking on Gareth Southgate’s door to start for England at the Euros. His place in the squad is surely sealed at this point, at least.

In a somewhat scrappy goalless draw with few highlights by way of goalmouth action, Phillips’ supremely assertive individual performance was a joy to behold.

He recovered the ball 13 times for Leeds, successfully pulling off all eight of the tackles he flew into, never losing Fernandes.

Bielsa’s men are gradually learning how to grind out results when the game isn’t played on their own terms, with the opposition dominating in terms of possession and territory. In such a context, it was Phillips’ defensive duties that stood out, but he was still able to showcase his trademark playmaking ability from deep.

What a goal this would have been 😮

How about that pass from Kalvin Phillips too 🎯 pic.twitter.com/tDukqMX2XG

His pinpoint crossfield pass for Helder Costa on the hour mark, arguably Leeds’ best goalscoring opportunity, was a reminder that Phillips is so much more than a simple midfield destroyer. Like David Batty imbued with the spirit of Andrea Pirlo.

Like Batty, he’s humble enough to enjoy the dirty work, relishing the task of stopping the opposition first and foremost.

“I really enjoyed it having the battle with the midfielders and everyone on the park,” Leeds No.23 told Sky Sports post-match in his usual unassuming manner.

“We do it all game, to be fair. We have different markers every game. My task was Bruno, so I tried my best to keep him quiet and luckily he didn’t pop up with a goal, so my job was alright.”