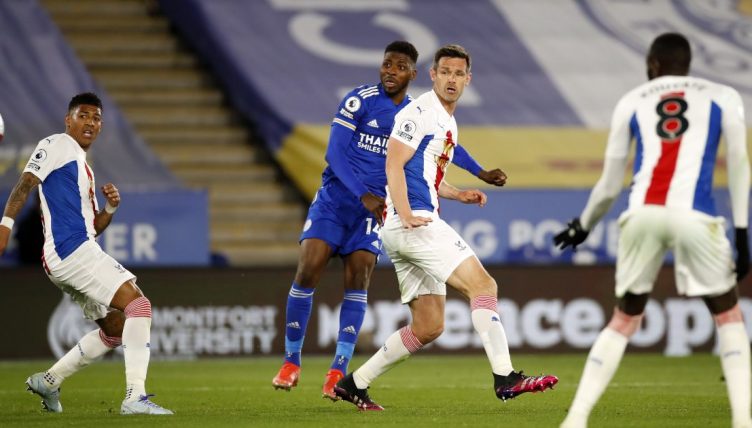 Leicester City fans are well used to having That Man leading the line.

The likes of Riyad Mahrez, N’Golo Kante and Wes Morgan all played vital roles in the Foxes’ miraculous 2015-16 title-winning campaign but only one player could claim to be That Man: Jamie Vardy, of course.

Arguably no player in the history of the Premier League has been more in That Man territory than Vardy during his record-breaking run of 13 goals across 11 successive games back in the autumn of that campaign.

The Red Bull-powered striker has invariably been That Man for Leicester ever since, winning the Golden Boot last term before scoring 13 goals in his first 15 appearances of this season.

But as Vardy has slowed down, and just as it looked as though Leicester’s push for a top-four finish might fall away again, someone new has stepped up to That Man’s mantle. The time is now, Kelechi Iheanacho.

As noted by Football Cliches author Adam Hurrey, sometimes you get a striker on the hottest of hot streaks, whereby the go-to descriptor is “that man again” from any commentator well-versed in the language of football.

Breaking through at Manchester City as Marcus Rashford was making a name for himself at Old Trafford, the two youngsters were inevitably talked up as rivals, but Iheanacho’s career trajectory has been something else entirely to the Manchester United star.

Having never quite established a place in City’s starting XI, he moved to Leicester in 2017 in search of more regular playing opportunities. But he struggled to shine in Vardy’s shadow and ended up on the periphery again.

With the odd chance here or there, rarely given a consistent run of games, the Nigeria international struggled to fulfil the early potential he’d shown at City.

Iheanacho scored just nine goals in his first 81 appearances for Leicester. He’s since scored 10 goals in his last 10 appearances, including the strike that’s taken the Foxes to their first FA Cup final since 1969, while winning his side vital points in their race for Champions League qualification. He now ties Rashford for Premier League goals in 2020-21.

The streak has seen him go from the kind of player only a crackpot would have in their FPL team to a must-have, so when it came for someone to put Leicester ahead in the 80th minute at home to Crystal Palace…who else but That Man again?

It would have been unthinkable for Iheanacho to score such a goal a couple of months ago. Instead, it was the finish of a striker brimming with confidence. Sky Sports duly obliged, captioning their tweet: “That man again…”

“The top priority for me as a coach is helping players to develop,” Brendan Rodgers told BBC Sport post-match, having described Iheanacho’s strike as “incredible”.

“It’s been difficult for Kelechi because of the style we normally played which was one striker – Jamie Vardy. We had to change it around with injuries, he’s come in and been exceptional.

“Not just his goals. He’s so happy to work hard for the team and his quality is phenomenal.”

Kelechi Iheanacho on how important 3 points were for Leicester City in their hunt for Champions League football @67Kelechi pic.twitter.com/nLCiHHdmFy

Jamie Carragher was left purring over his performance in the Monday Night Football studio, talking up Iheanacho as a long-term successor to Vardy, while the player himself is starting to challenge his Leicester team-mate James Maddison and Leeds United’s Patrick Bamford for a box-office booking for a post-match interview.

Having spoken emotionally after his first Premier League hat-trick against Sheffield United last month, it’s impossible not to root for a player that’s evidently put so much into where they are today, with their heart on their sleeve, a clear love of scoring goals and exuberance for football.

Long may he continue being That Man.