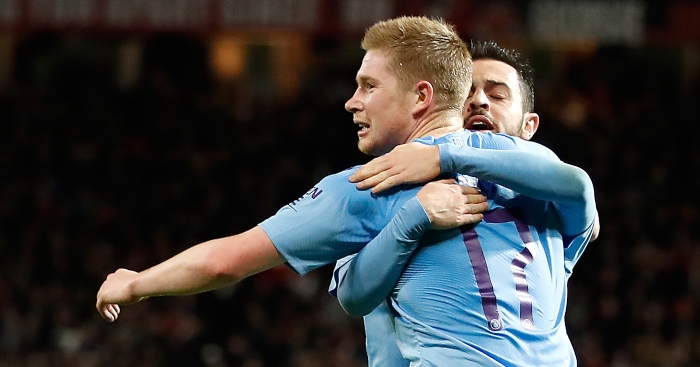 At times in their League Cup semi-final, it felt like Manchester City were playing a different sport to neighbours Manchester United, and no one encapsulated that more than Kevin de Bruyne.

The Belgian was instrumental as Pep Guardiola’s team raced into a three-goal lead at the break, and if we’re being honest the final score of 3-1 flattered their opponents.

It was a devastating onslaught from City’s front four, free from the different pressures provided by an orthodox central striker, but there was one moment in the first half which stood out above all others.

Just a couple of minutes after City’s second goal, with United still rocking from the impact of Riyad Mahrez’s strike, the visitors were on the front foot again.

However, amid the breakneck pace of the football taking place around him, De Bruyne had the foresight to continue operating at his own pace.

Phil Jones was the victim on this occasion, but that was largely coincidence. Anyone could have been on the receiving end, and no one is ever safe.

De Bruyne i have just one question for you!

What was Phil Jones' offense to deserve such punishment? His family is watching KDB, don't try this next time. #MUNMCI pic.twitter.com/qbQqgNUe1C

The touch had a little bit in common with De Bruyne’s touch to beat Jorginho before finding the net against Chelsea: this was a man controlling time just as elegantly as he kept space under his control.

If you look at the clock, it will tell you City took 15 seconds to get from the edge of their own penalty area to the heart of their opponents. That’s the time difference between Bernardo Silva’s first clearance and Andreas Pereira’s unfortunate own goal.

But that ignores De Bruyne walking up to the match clock, setting it to half-speed, then carrying on as normal. As Jones zips past him, leaving him space to stroll to the left and get a shot away, football has never looked easier.

You can sense the moment Jones recognises the size of his error, as if he has led a high-speed car-chase and sped right past as his target turns into an alley. By the time you realise the error of your ways, you still have a few seconds of staring your own failure in the face before the consequences present themselves.

There are shades of Lionel Messi’s famous evisceration of Jerome Boateng in the Champions League five years ago, and for this reason it doesn’t matter whether Jones or anyone else is the victim. The majesty comes in the actions of the attacker, to the point that the only variation victim-wise is how helpless they look in a battle they were never in contention to win.

To get so deep into an opponent’s head is impressive even before you consider the speed at which this all takes place.

De Bruyne isn’t shooting his pursuer clean in the face, but rather he’s throwing the bullet into Jones’ path and waiting for the Englishman to absorb it while he strolls off into the distance.

Indeed, the entire first half felt like an elongated killshot, with bullets scattered en masse and traps laid for United defenders to aimlessly wander into even before Pereira turned the ball into his own net.

It’s really the simplicity of the operation which catches the eye, though. None of the individual components of De Bruyne’s actions are beyond a solid footballer, but it’s the act of putting them all together like this, at such pace, which ensures the entire package is infinitely more impossible than its individual parts.

De bruyne should be jailed for that, poor Phil jones 🤣 pic.twitter.com/tN3LCiKwLk

The scariest part of this is that De Bruyne will do the same thing again if he needs to, humiliating opponents over and over until they correctly recognise their best option is to just accept their fate at the earliest moment possible.

Can you really blame future Phil Joneses (or, indeed, Jones in the second leg – yeah, they have to do this all over again) for wiping the City man out at the source to minimise embarrassment? You can’t get skinned if you’ve already been sent off, after all.

For now, though, Jones will have to make do with seeing De Bruyne’s face and dropped shoulder every night in his dreams as his mind replays that moment. Perhaps he should count himself lucky – there are people who would happily pay hundreds of pounds to see that kind of thing close-up, and he gets it for free.

Where are they now? Both Xls from Man Utd & City’s last League Cup semi