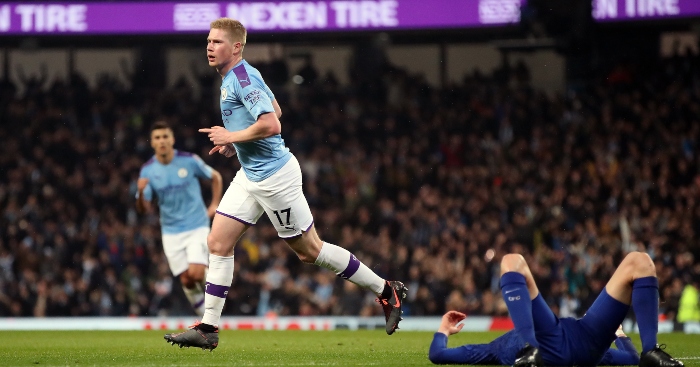 Kevin De Bruyne only started 11 games as Manchester City won the Premier League in 2018-19. That they’re even within 10 points of runaway leaders Liverpool this season has a lot to do with the Belgian’s return to fitness.

De Bruyne only completed 90 minutes in the league four times last term, and City won those four games by a combined score of 9-1.

This time around, so much of what has been great about Pep Guardiola’s team has come through their No.17, and he showed it again in the comeback win against Chelsea.

The City-Chelsea game had the high pace and intensity one would expect from a meeting between two sides in the Champions League places and well clear of the chasing pack.

N’Golo Kanté’s opening goal spoke to the fine margins and the need to take chances in the blink of an eye, while Riyad Mahrez’s winner was an exercise in speed of movement in enclosed spaces.

However, when everyone else is moving at a million miles an hour, sometimes slowing to a standstill can be just as powerful as quickening your pace.

Recognising your surroundings allows you to manipulate time, but without the focus to make it stand still you gain nothing. This is Kevin De Bruyne we’re dealing with, though.

Jorginho has always been the kind of player you associate with calm and balanced decisions rather than desperation, and yet here the Chelsea midfielder throws himself at the feet of De Bruyne in an effort to get in the way of what he assumes will be an immediate shot.

Why is this relevant? Mostly because a player can’t be expected to anticipate Jorginho committing himself like this and setting yourself to roll the ball inside so confidently.

For most players, this would be a heat-of-the-moment call, and one which would more often than not result in a botched touch or a panicked shot into the body of the Italian. The difference, as far as De Bruyne is concerned, is that his moments last longer than yours.

There’s something extra special about doing this to a player known for threading the eye of the needle and seeing things which others don’t. De Bruyne leaving Jorginho prone on the ground is like a lion turning the rifle back on the hunter. Then, as he’s bleeding out, holding a pillow to his head and ushering him into a deep, everlasting sleep.

As the former Napoli man lies horizontal, you can see the despair in his eyes. He gave up that calm, unflappable exterior – and for what?

For De Bruyne to even get a shot away so quickly afterwards, even one that neeed a deflection to take it beyond Kepa Arrizabalaga, is just further proof his mind communicates with his body at a far quicker rate than should be possible.

We’ve seen De Bruyne back to his best on more than one occasion this season, of course, and when that happens it’s a delight to watch.

The most visible example of his brilliance came against Watford, not just with his late and emphatic goal but with the cross to create David Silva’s opener inside the first minute of the game.

The Belgian plays like someone who isn’t just in total control of his own actions but of everyone else’s at the same time. It’s as if he is using half of his brain to send Silva down a specific path, while only needing the power of the other 50% to master the arcing delivery to the back post.

It’s the same mindset which goes into the goal against Chelsea: steps one and two are being calculated simultaneously as if memorising the route for your getaway car before you’ve even finished pulling off the bank heist.

It feels tragic that City’s triumph last season, one of the finest finishes to any Premier League campaign, was largely achieved without De Bruyne.

That feeling is only exacerbated when you accept it will be a tall order for Guardiola’s men to catch Liverpool, even with two-thirds of the season remaining, despite him producing this sort of brilliance on a regular basis.

Still, as long as De Bruyne is reminding us what he can do, you’d be a fool to rule them out entirely.