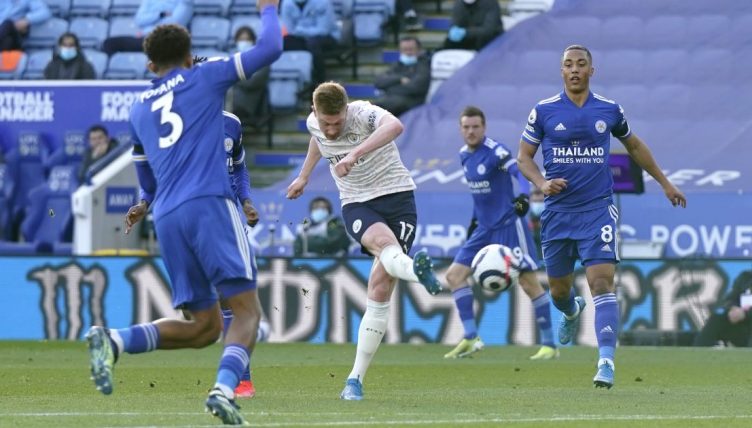 Lockdown football is the strangest of beasts.

One minute, you think: what would we have done without it?  The next, you find yourself wondering: what can we do with it? All of it, all of the time, to paraphrase Mitchell and Webb.

More games stuffed into an already over-packed schedule, all of it televised, all of it soundtracked by a choice between horrendous virtual crowd noise or deathly silence occasionally interrupted by grumpy assistant coaches screaming profanities at under-performing full-backs.

It is recognisably football, and like we said, what would we have done without it? But as a television spectacle, it has been zombified, sucked of the life that makes it so special by forces outside our control.

There is a man who can help though. A man who can cut through the ceaseless inanity and repeated cliches from pundits, through the endless procession of perfunctory matches, whose artistry is still enough to make us forget for a second just what we’ve been missing.

His name is Kevin de Bruyne and he is on an inexorable solo mission to inject pure brilliance into our living rooms every Saturday. And Wednesday… and Sunday and Tuesday and Monday and Friday and Thursday and well, yeah; football never stops. Fortunately, neither does De Bruyne.

After a magnificent international break in which he skewered first Wales and then the Czech Republic with the pointy tip of his through-ball katana, he was back at it at club level this weekend for Manchester City, slicing open Leicester City with such brutal ease that soon we’ll have to say that hot knives go through butter like Kevin de Bruyne passes through defences, rather than the other way around.

Even more impressive than De Bruyne’s magnificence in itself is the relentlessness of it, especially in the circumstances. Footballers can be forgiven for looking a bit jaded at the minute, sapped of energy by the incessant demands made of them as our sole source of live entertainment – performing lockdown monkeys in their diamante-encrusted, gold-leafed, Louis Vuitton cages.

But not De Bruyne. His desire for perfection never ends. And in the dying stages of the Leicester game on Sunday, he was there, still displaying it for our delectation.

Seventy-eight minutes gone, City 2-0 up, the game all but won with Leicester having been passed and tactical fouled and counter-pressed into submission.

And there was De Bruyne, backing up Gabriel Jesus as he hounded a bereft-looking Jonny Evans on the edge of the Leicester area. Jesus won the ball, played in his Belgian team-mate and what followed was a two-second masterclass in simplistic perfection.

De Bruyne was already on the half-turn as the ball came to him, he glanced over his right shoulder, saw Riyad Mahrez making the diagonal dart into the penalty area and stopped.

Mahrez was still onside, the ball was played with such delicately precise weight that he didn’t have to break stride, and he shot… wide.

It didn’t matter. The game was already won. Yet that De Bruyne still had the composure and wherewithal to play such a beautifully timed pass so late in the game was indicative.

His whole performance – bar a theatrical moment as Daniel Amartey gave him a clip round the ear in the first half – had been immaculate.

The City No.17’s most significant contribution had come four minutes before setting up that Mahrez chance when he played another contender for the pass of the season competition that only he, it seems, is allowed to enter.

The ball was a true defence splitter, leaving Evans and Wesley Fofana sat on their backsides as they attempted to get a toe on it to stop it.

But he had exerted a truly incredible level of control on proceedings from the very start.

At a time when we can all be forgiven for thinking football is in danger of going stale, we have Kevin de Bruyne’s artistry to thank for ensuring the game can still stir our souls.