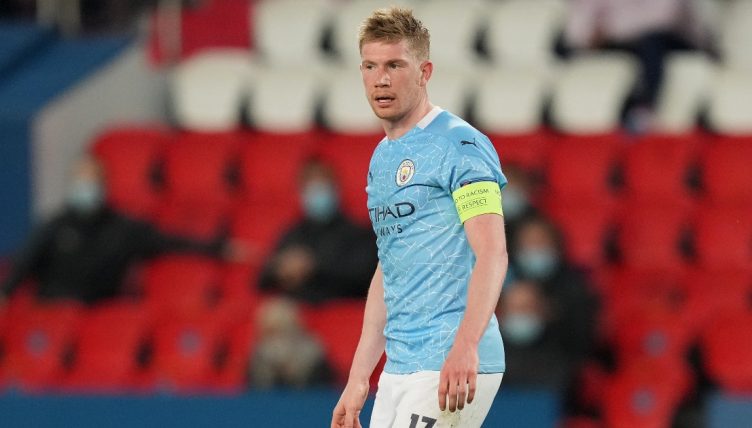 The Guardian‘s Barney Ronay summarised it best: “Harry Kane versus a team that has everything except a Harry Kane.”

The thinking here is that, for all their brilliance, City would still benefit from the presence of an elite striker. Never mind that Sergio Aguero has spent his final season in Manchester picking splinters out of his arse, surely Pep Guardiola’s side would be unstoppable with a conventional forward leading the side.

That, using the technical term, is bollocks. On a wild, frantic night in the French capital, Manchester City came from behind to beat Paris Saint-Germain 2-1 in one of the greatest European performances in their history. Without a striker.

Kevin De Bruyne was the pick of Pep’s army of fluid midfielders. The litmus test for the game’s elite players is whether they go missing on the big occasion, feeling overawed by having to carry a team’s performance on their shoulders. Not De Bruyne.

As City recovered from a hesitant start to dismantle their opponents, one was reminded of Luka Modric’s performance against England in the 2018 World Cup semi-final. This was a player flourishing as part of a team comfortable in their own skin.

It just had to be Kevin De Bruyne!pic.twitter.com/DZxVWXV7IR

Yes, the goal was fluky. It looked for all the world like a devilish cross that bypassed friend and foe while confusing the normally excellent Keylor Navas. To his credit, the Belgium international admitted as much in his post-match interview by calling the goal “a bit lucky” in a masterclass of heroic understatement.

But De Bruyne also delivered a masterclass in direct running, dribbling and those diagonal through balls he specialises in. Besides, the true moment of genius came minutes before.

Passes were combined between Bernardo Silva, Riyad Mahrez and Rodri before Mahrez cut onto his left foot and delivered a fast, whipped cross into the penalty area.

Presnel Kimpembe was probably relieved to block the ball with any body part possible, but the clearance was a poor one, lopping the ball invitingly in the air.

It was here that De Bruyne turned into a Belgian Andy Carroll. Contorting his body as if made of Play-Doh, City’s talisman leapt into the air and lashed an acrobatic volley towards the PSG goal.

Unfortunately, the ball fizzed narrowly over the bar. Navas watched the ball with an aura of calm, no doubt knowing there would have been no stopping the effort had it been on target.

PSG looked broken by the end of the match, a rag-tag mob beset by the kind of ill-discipline not seen in a Mauricio Pochettino-side since the Battle of the Bridge.

City were the primary reason for that. It helped that Guardiola decided against his normal overthinking of these occasions and fielded his best line-up in a conventional formation. It also helped that City refused to panic while being outplayed in the first half. It didn’t hurt that De Bruyne turned up in the mood to dominate the midfield.

If City need to keep the faith in their quest for that elusive Champions League crown, in De Bruyne they have a man who dares to dream.