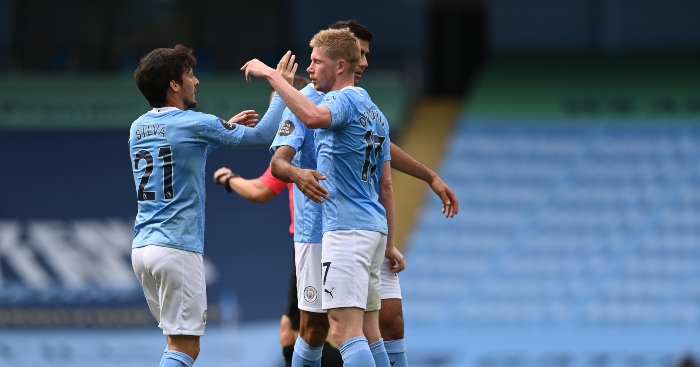 Manchester City’s win over Norwich was always going to be about David Silva’s big farewell, but that was no reason for Kevin De Bruyne to slow down.

Silva was the centre of attention on his last City game, and rightly so, having given the club 10 years of wonderful memories.

There was still a game to be won, though. And so, in what you might want to tell yourself was a tribute to the Spaniard’s best years, De Bruyne pulled out the kind of performance that reminds you just how untouchable this City side can be.

When you look at a goal like the first of De Bruyne’s two curlers from the edge of the box, it’s not just a case of being blown away by the precision of the finish. Yes, it’s fantastic, but he’s the kind of player who has long been able to make the spectacular look ordinary.

The footwork that precedes the finish though? That’s different. If there was a football equivalent of a basketball player spinning the ball on his finger, waiting for his cue to put the defenders out of their misery and score a buzzer-beater, this would surely be it.

It’s as if De Bruyne has offered the Norwich players a choice. Either he’ll mercilessly destroy them, leaving a pile of bloodied and bruised bodies with injuries inflicted merely by looking at him, or he’ll make it look like they were close to stopping him.

Neither circumstance gives the Canaries any actual hope of intervention, but it just so happens that the one they can safely show their families is also one that makes him look good.

It would be easy to move on from this to De Bruyne’s second goal, another effortless closer as the clock ticked down in the second half, but there’s another moment which painted a more concise picture of what makes the Belgian so untouchable.

Given limitless space and time, many will be capable of the spectacular. The difference is what happens when you have a limited window to produce.

In De Bruyne’s case, the most impressive change is that nothing changes.

As he receives the ball from deep and carries it forward, De Bruyne might as well be strolling down the beach with a plastic football or warming up on a five-a-side cage before stepping in as a ringer to play with the team from his mate’s office.

There’s no sign of the usual urgency which accompanies a Premier League match, but that urgency is still there, he’s just able to brilliantly mask it.

Footballers’ movement is vital in terms of creating space to use the ball, but this should be considered alongside the ways in which they use the ball when this space isn’t there.

De Bruyne’s pass for Raheem Sterling’s goal is a combination of the two: creating the space while holding a cloak over it so it remains invisible for everyone else.

If you wanted to, you might say this kind of subtle brilliance is the kind of thing people used to associate with none other than David Silva.

There’s no doubting the influence David Silva has had on Manchester City over these last 10 years, but there was something symbolic about De Bruyne’s performance in his colleague’s final Premier League game.

If this was a case of the torch being passed, City should be grateful it has gone to someone so adept at taking passes in his stride.