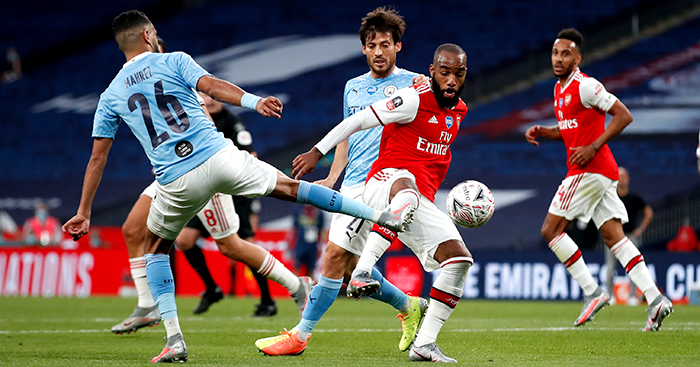 There was an awful lot to love about Arsenal‘s performance in their 2-0 win over Manchester City, but Kieran Tierney and Alexandre Lacazette’s link up for the first goal might just have been the best part of it all.

Arsenal followed up their win over Liverpool in the Premier League with a thoroughly deserved victory at Wembley to make a record 21st FA Cup final and complete a wonderful week for Mikel Arteta and his players.

Pierre-Emerick Aubameyang stole most of the headlines courtesy of his two brilliant finishes, but there were heroes all over the pitch. Emiliano Martinez made a terrific save from Riyad Mahrez for another clean sheet; Ainsley Maitland-Niles was outstanding in an unfamiliar left wing-back role; David Luiz responded to his nightmare display against City last month with quite possibly his best performance in an Arsenal shirt yet.

We could go on, but what we really want to talk about is the first goal. Maitland-Niles was the only player not to get a touch in an 18-pass move, but after 13 passes the ball was still inside the Gunners’ box with Luiz. It never got that scary, but it definitely wasn’t a move for the faint-hearted.

After all, it wasn’t that long ago when trying to play out from the back against City nearly ended with Petr Cech passing it into his own net. You don’t need that kind of stress as a football fan.

But then Luiz brought it out and, following Arteta’s instructions that have come to light this week, waited to commit an opponent before passing the ball out to Tierney on the left touchline. So when the Scotsman received the ball, he was able to look forward.

But at that point there were still seven City players behind the ball. Tierney was quickly closed down and was still well inside his own half. Arsenal had played themselves out of danger, but they certainly didn’t look like they were about to cause any for City.

Then the magic happened. Lacazette had dropped deep between the lines, as he did throughout the match, and Tierney picked him out with a brilliant pass which immediately took out three players. Lacazette controlled, turned and beat Ilkay Gundogan all at the same time, switched the ball to Hector Bellerin on the right and suddenly City were in trouble.

It still needed a magnificent ball in from Nicolas Pepe – that’s now eight goals and nine assists for the season – and finish from Aubameyang, but if passing it around your own box and nearly seeing your keeper kick it in the net was football hell, those 10 seconds from Luiz to Bellerin were definitely football heaven.

It wasn’t a one-off moment of brilliance from Tierney and Aubameyang either.

Tierney was exceptional throughout and claimed the assist for the second goal with a beautifully-weighted pass over the top for Aubameyang – Pepe played a crucial role in that one, too – and all this as one of three central defenders alongside Luiz.

And though Lacazette’s main responsibility appeared to be to convince Gundogan that he was, in fact, not an opposing player but his shadow – the Frenchman only touched it 28 times in 77 minutes – those long spells without the ball certainly didn’t blunt his sharpness once he got it.

Indeed, having already produced one moment of brilliance for the first goal, Lacazette very nearly created a second when he dropped deep, again, to collect a pass from the left, again, mug off a City player with his turn, again, and get Arsenal breaking at pace, again, with another great ball.

The only problem this time was it hit Pepe’s heel but, look, sometimes, Pepe’s gonna Pepe and there’s nothing anyone can do about that.

Arsenal had lost the last seven games in a row against City before this one, but Arsenal in the FA Cup are a different animal even at the worst of times. And this Arsenal, led by this manager, genuinely seem like a different proposition right now to the one which started the season under Unai Emery.

And if Arteta can keep this squad together and get the money to add to it, who knows, Arsenal fans might get to experience a whole lot more football heaven next season.