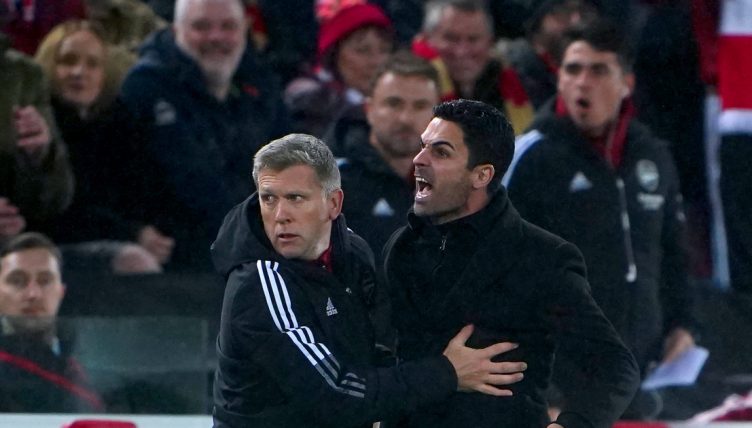 There are few things in life to compare with the dark humour of watching an adult who has completely lost it.

Crucially, there’s a difference between people who act aggressively knowingly and those who have lost all control of their emotions.

In a footballing sense, compare the cynicism of the Netherlands in the 2010 World Cup final with Tottenham’s collective brainfart during the Battle of Stamford Bridge – the former left a sour taste in the mouth while the other inspired mischievous grins and rubbernecking on an industrial scale.

Which leads us nicely to Jurgen Klopp and Mikel Arteta.

Both managers are generally recognised as nice, functioning members of society – which, given their high-pressure job roles, is no mean feat.

It’s not hard to imagine Klopp holding court in your local pub, getting in a round of Erdingers and displaying the common touch that has him so adored by Liverpool fans.

While Arteta is a more studious, serious presence, the Arsenal boss always seems incredibly put together; with an expensive coat, slick hair and the air of a man who hasn’t raised his voice since discovering chorizo in his paella at Everton.

So seeing the former midfielder react angrily after believing Sadio Mane caught Takehiro Tomiyasu with an elbow was something to behold.

Getting all up in Klopp’s grille, like an Army general testing the nerve of his latest batch of recruits, Arteta offered to meet his counterpart in the Anfield car park after the game.

Something that’s become known in footballing circles as ‘Doing a Lampard’.

The often-passionate Klopp didn’t exactly hold back either, flinging his arm wildly towards Arteta while being dragged away by the fourth official.

This is the crucial detail. Scores of people give verbals when there’s a human shield to stop getting matters out of hand but church mice would be louder if there was a real prospect of violence occurring.

After all, there’s nothing more English than the innate patheticness of watching grown men lose their shit over nothing – proof, if nothing else, of how Anglicised both Klopp and Arteta have become.

Mikel Arteta and Jurgen Klopp come face to face on the touchline! pic.twitter.com/2q7XYTwo3e

The most hilarious aspect of the ‘clash’ was how it galvanized a previously sterile Anfield. With the atmosphere ramped up, Liverpool stuck four in the Arsenal net and made Arteta’s outburst seem incredibly counter-productive

“With the situation, Sadio didn’t touch the player,” Klopp told talkSPORT after the game.

“Then they go up and ask for a yellow card. It happens against Sadio so often. It happened against Real Madrid last year and he couldn’t do anything because the ref was on him saying ‘one more thing and you’re off’.

“For an offensive player, he’s not a hard player or crazier tackler.

“For Atletico [Madrid] here [at Anfield], we had to take him off at half-time because they tried to decrease our number here.

“I just asked: ‘What do you want in that situation?’ To show yellow cards for no contact, otherwise it would be a crazy game.”

Very reasonable and very boring. We just hope it’s not too long before Arteta loses his shit again.