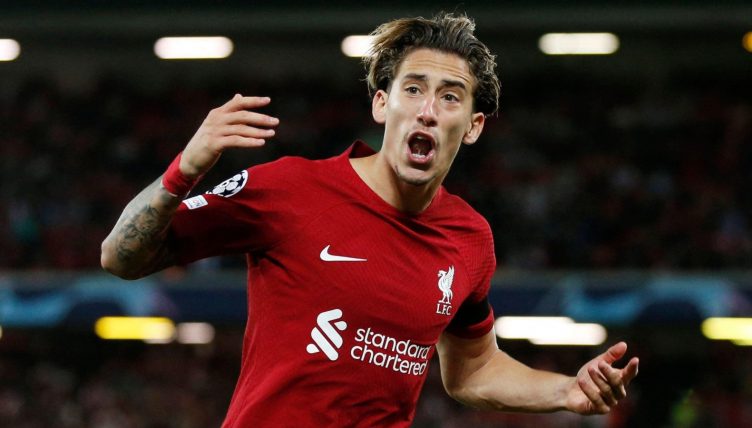 Liverpool are back. Well, almost.

The recent international break was marked, amongst other things, by the sound of the first murmurings against Jurgen Klopp at Anfield.

After coming within a week of reaching footballing utopia in May, Liverpool had made a sluggish start to the season and more than a few observers were beginning to draw parallels with Klopp’s disastrous final year at Borussia Dortmund.

To that end, a yawn-and-scratch-of-the-arse win over a timid Rangers proves nothing just yet. But one player went above and beyond in demonstrating that there’s still a fire lit in Liverpool bellies.

Kostas Tsimikas largely spent his first two years in England as the understudy to Andy Robertson but, while Robertson has often looked more knackered than a marathon runner contemplating a visit from his mother-in-law, Tsimikas has been quietly excellent in his stead.

The Greece international is already a cult hero at Anfield after his winning penalty in last season’s FA Cup final and played his part in helping Liverpool keep a rare clean sheet on a chilly autumnal night.

Tuesday’s encounter with Rangers had been billed as a ‘Battle of Britain’ and, although reality was more divorced from the hype than eating a Big Mac, Tsimikas showed a dedication to the cause that makes supporters fall in love.

As the game reached its conclusion, with Liverpool resting their brain and brawn for tougher challenges ahead, Rangers dared to venture towards goal through an enterprising run from Rabbi Matondo.

Having skinned Joel Matip with the ease of an expert sheep shearer, Matondo tiptoed along the byline and slammed the ball across the goalmouth.

With Alisson unsighted, Fashion Sakala looked to have the easiest of tasks to bundle home a consolation for the thousands of Rangers fans who’d travelled south in their droves.

But they reckoned without Tsimkas. Showing the kind of athleticism simply unaccessible to you and I, the full-back dived without any regard for his own personal safety and hooked the ball into the Anfield Road End.

It looked physically impossible; the kind of skill that leaves observers rubbing their eyes in disbelief while questioning everything they knew about physics and mathematics.

Put simply, anybody attempting a similar clearance will score a spectacular own goal 99.9% of the time. Give the guy this year’s Nobel Peace prize.

Tsimikas proves once again why he is clear of Robertson pic.twitter.com/RGe7thCqAD

“It’s a bad start for us, for the whole team, now we have to get through it together,” Tsimikas said ahead of Tuesday’s game. “We have good players and we have to be 100% focused. Nothing is finished. We have to bounce back.

“Last year we were 15 points back and then in the end we were so close to winning the Premier League. Now nothing is finished, but first of all we have to win the games starting tomorrow.

As the Liverpool faithful filed away from Anfield in search of a celebratory pint, they’ll surely be warmed by the desire and fight shown by their reserve left-back.

Many of Klopp’s regulars – Virgil van Dijk, Mohamed Salah and Trent Alexander-Arnold among them – have struggled to hit the heights this year and there are signs of fatigue after so many years of gegenpressing.

But Tsimikas can provide that most elusive, yet essential, ingredient of any rebuilding job; renewal, without sacrificing anything in quality.

One win doesn’t change everything for Liverpool but it has shown the recent obituaries are premature in the extreme.

READ NEXT: Ranking the top 10 best football players in the world since 2017