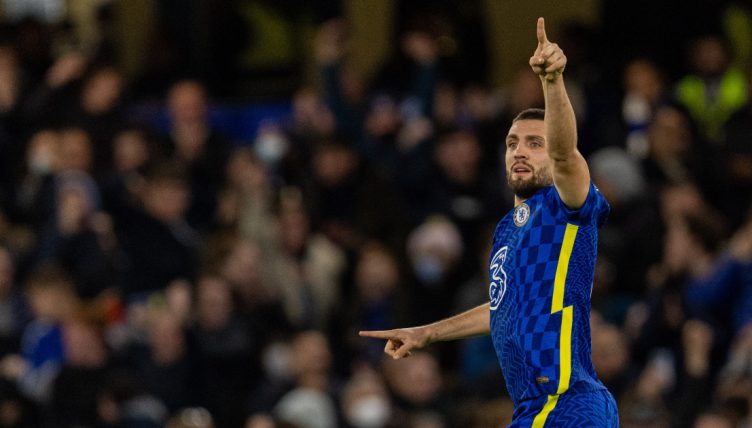 It was some strike, wasn’t it? 2-0 down to Liverpool in the Premier League with Chelsea needing a miracle, Mateo Kovacic stepped up to score the goal of the month.

There were a few stunning goals on the same weekend in the Premier League; Manuel Lanzini’s juggle, Alexis MacAllister’s long-range effort, and of course Mo Salah’s goal in the very same match.

Some will tell you those goals were better, but we all know they’re just trying to be a contrarian football hipster; none of those strikes top Kovacic’s effort, and few goals will this season.

It was the sort of goal that lends itself perfectly to a classic Gary Neville “ohhhhhhhhhhhhhhh” and he let out an all-time classic when he saw it.

Whipped in fast and dangerous from a free-kick by Alonso, it was all Caoimhin Kelleher could do to punch the ball up and out of the box.

That should have been that; a comfortable clearance and the game petering out to a routine Liverpool 2-0 win.

Thomas Tuchel’s position would have grown more and more uneasy, and Romelu Lukaku would have given an interview about how Inter just wouldn’t have lost the game or something.

But unfortunately for Liverpool (and Lukaku), the ball dropped from the sky to the feet of Kovacic.

Mateo Kovacic with an incredible volley… 🚀

Chelsea are right back in this… and it's now 2-2! Pulisic with the equaliser 👀

What a match this is… #CHELIV

He watched it the whole way, from the free-kick to Kelleher’s punch and he followed it like a Wise Man to a bright star when it went high into the night’s sky.

The Croatian noticed it was going over his head, but only just, and began walking backwards with a thousand tiny steps like a reverse Paul Pogba penalty.

It was Jordan Henderson’s job to press him, but the Liverpool captain only did so half-heartedly because what exactly was Kovacic going to do beyond bring the ball down?

Maybe Henderson started to worry when Kovacic kept stepping back, his gaze fixed on the hypnotising ball which grew larger as it fell from its orbit towards the Stamford Bridge pitch and Kovacic’s foot.

“Should I?” he thought, “Could I?” he questioned, “Fuck it,” he said as he leathered the ball.

It was Cantona in the FA Cup Final esque, you know the one where he’s going backwards when he volleyed it, in the way Koacic struck it.

His left foot was stuck to the ground, a pole that allowed his right to swing like a machine in a robotically perfect straight line to meet the ball.

It was a perfectly executed golf swing, the type you do only once at the driving range and which prompted you to buy some golf clubs for yourself for Christmas because surely you can repeat that and, of course, you never will.

Away the ball flew no longer just hypnotising Kovacic but the entirety of Stamford Bridge including the bemused Henderson who watched it fly over his shoulder.

Only Kelleher was not obsessed with the hurtling beauty of Kovacic’s rocket.

That was because he had to dive in vain to stop it as the ball hit the inside of the post in the top corner, flew in, and turned the Stamford Bridge crowd into a chorus echoing Neville’s “ohhhhhhh.”

It was some strike from Kovacic and inspired the chaos that saw Christian Pulisic equalise moments later.

The match against Liverpool was only Kovacic’s second full 90 since returning from injury, and his Man of the Match performance was some way to announce himself.

He was quietly a very important part of Tuchel’s side prior to his absence, but he couldn’t have possibly made a louder statement of the brilliance he possesses than he did at the weekend.

Kovacic’s performance was also one which felt strangely emblematic of Chelsea as a whole, who are swamped with talent and yet just haven’t been able to put together the consistency required to win a Premier League title in the era of Pep Guardiola’s cheat code.

That is not to criticise them but to say that like Kovacic, they are truly capable of the world-class and that just as it makes him the perfect cup player, it makes Chelsea the perfect cup side.

They are capable of beating absolutely anybody across 90 minutes; just as Kovacic bends his role to whatever the team needs in midfield, Chelsea are capable of doing whatever it takes to win.

Only when they have been overwhelming favourites, allowed to freely play the way they want to, have they been disappointing which means the Premier League title is likely gone already. Yet when you look across the Champions League, there’s not a single team there you feel Tuchel’s side could not compete with.

Mateo Kovacic scored a similar goal back in December 2014 versus Lazio in a 2-2 draw.

Insanely, it was very identical🔥

They seem uniquely set up for knockout football, capable of managing the match in any circumstances.

While Guardiola’s side might be the shining academics of football with top marks in Tika Taka 101 and an Introduction to Space, Tuchel has taught his side to have footballing street smarts.

Chelsea are adaptable on the spot, able to change their playstyle to suit the match’s needs and more than happy to bend the rules if needed, like Kovacic smashing the ball unreasonably hard into the top corner.

Yes, they work hard, but they work smart as well and cut the corners where possible.

It means that whilst they might be rough around the edges and aren’t yet pristine enough for the Premier League, they are ready once more for the Champions League street fight.