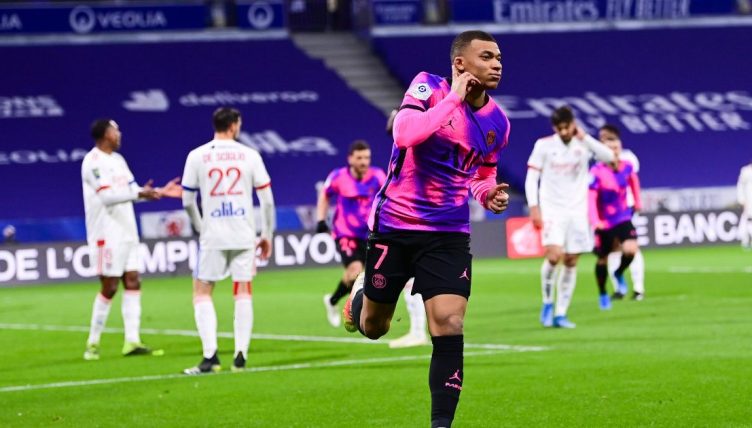 As Paris Saint-Germain‘s Kylian Mbappe raced towards Lyon goalkeeper Anthony Lopes in the second half of PSG’s 4-2 win at the Parc Olympique Lyonnais, you knew there was only one possible outcome.

Keylor Navas had been forced to make a smart save at the other end just seconds prior, but it had broken to Marco Verratti who swept a ball over the Lyon defence and PSG’s 22-year-old light-speed superstar was away.

He bore down on the Lyon goal, sold Lopes a dummy with his right shoulder and shot to the other side, the ball bouncing nonchalantly into the net as the Portugal international ‘keeper lay prostrate on the ground.

It was PSG’s fourth of the night and Mbappe’s second. It was 20 for the league season for Mbappe and his 100th Ligue 1 goal in his 142nd top-flight match. Keep your farmers’ league jokes to yourself, that is some achievement for someone who does not turn 23 until Christmas.

The talk of a 10-year duopoly between Mbappe and Erling Haaland at the peak of world football looks ever-more accurate and inevitably both of them will have their goal-scoring records relentlessly compared with previous generations of greats.

Yet when analysing the pure data, contrasting Mbappe’s goal numbers with his prolific forebears and contemporaries, it is worth bearing in mind just how much the France international brings to his team outside the penalty area.

And as if he wanted to make doubly sure that nobody forgot just how much of a creative threat he could be yesterday, Mbappe produced the nearly-assist of the season prior to notching up his hundredth career league goal.

With six minutes gone and the scores still at 0-0, Mbappe got the ball about 30 yards from Keylor Navas and facing his own net.

To say there was nothing doing would be an understatement; with pressure being applied by two Lyon players it looked more likely that they would nick the ball and score than anything would happen for PSG.

Mbappe, completely unfazed, knocked a backheel between his two markers to Verratti, got it back first time and accelerated towards the halfway line.

Yet with two more defenders to his right and the touchline to his left, it looked like Mbappe would have to turn back and start again.

Instead, he channelled the spirit of 2014 Copa del Rey-final Gareth Bale, poking the ball into the space behind Marcelo and turning on the afterburners. A short detour off the side of the pitch took him around Marcelo, who looked like he was wading through a swimming pool filled with golden syrup, and Mbappe was free.

A quick look up as he sprinted along the line had alerted Mbappe to the fact that Moise Kean was breaking into the box and the World Cup winner swung a left boot at the ball, delightfully whipping his cross in between Lopes and Jason Denayer to find his Italian colleague unmarked in the middle of the box.

The goal was at Kean’s mercy. Unfortunately for Mbappe, the Everton loanee could only direct his shot straight at Lopes’ left big toe and the ‘keeper gratefully hacked it away.

On Sky Sports last week, Thierry Henry said of his compatriot: “Mbappe kills you a different way. Mbappe gives you something different.” This was the proof.

So good was the run and cross that had Kean’s shot gone in, French newspaper headline writers would have surely had to find a way to shoehorn in a mention of the assist alongside the news of Mbappe’s 100th league strike. As it was, the landmark goal got pride of place on the back pages.

“It was a good day to score the 100th league goal as I knew I was two goals away,” Mbappe told Canal+ after the game. “I wanted to score the goals in the previous game but instead of that I gifted a goal to Kolo Muani so I needed to make up for that. It’s another stage in my career, another step into history.

“These are things that stay with you. The road continues, it has only just started. I still have many years left in front of me in order to perfect my game and to improve, and things can only get better.”

If that’s true, the future looks bleak for the defenders in Europe’s top leagues.