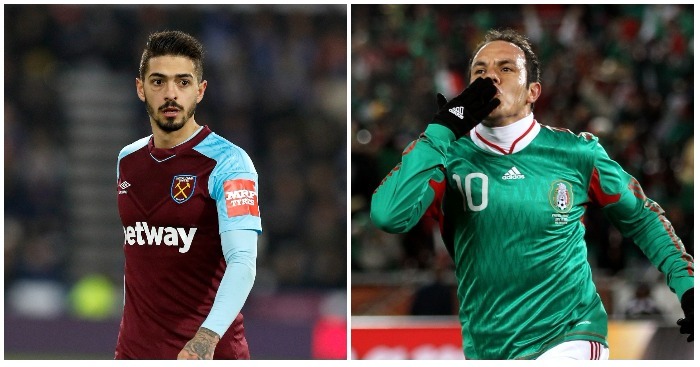 Manuel Lanzini’s attempt to score with a rabona in West Ham United‘s win at Huddersfield Town was pretty rubbish, but showboating is about more than that one moment. Just ask Cuauhtémoc Blanco.

Back in November 2017, ahead of West Ham’s first home game under David Moyes, Lanzini admitted confidence had dropped in the camp after a series of disappointing results.

“I think we need to keep things simple in the way we play in order to increase our confidence,” he said, having been part of the starting XI which suffered back-to-back defeats against Liverpool and Watford.

The Argentine helped the Irons earn a point that evening against Leicester City, sending in the corner from which Cheikhou Kouyaté headed the equaliser, but the uptick proved anything but when Lanzini’s dismal penalty was kept out by Jordan Pickford in a 4-0 loss at Everton.

Less than two months on, however, the former River Plate man was scoring his first away league goals for more than a year, and more importantly, was doing this.

While some players might attempt a rabona through fear of using their weaker foot (looking at you, Jonathan Calleri), Lanzini doesn’t fall into that camp.

Okay, so it was a pretty awful attempt, but Lanzini’s decision-making was that of a man confident of his own ability to beat a goalkeeper in that style and from that range – and it’s not the first time he has attempted it.

Early last season, when Watford came from 2-0 down to win 4-2 at the London Stadium, visiting captain Troy Deeney argued Lanzini’s rabona shot – and Dimitri Payet’s rabona assist for Michail Antonio to double the home side’s lead – were all the encouragement Walter Mazzarri’s team needed to turn the game around.

“You can appreciate good skill and that was great skill for the second goal, but as a professional you cannot allow someone to do that to you,” Deeney said, adding that he felt the behaviour was “disrespectful”.

There are occasions where this serves no purpose other than to pull the tiger’s tail, encouraging the opposition to come back at you more fiercely and forcefully just to prove a point.

However, for every time this results in a four-goal comeback, there will be countless more where you can stand aside as the tiger leaps at you and barrels head-first over a cliff-edge.

There are few things more satisfying in football than having your rival exactly where you want them, and the beauty of a rabona comes from the fact that it brings you personal satisfaction whatever the score and whatever the stage of the game.

A well-timed nutmeg can be thrillingly humiliating, and a slick passing move can leave opponents both bettered and exhausted, but a rabona has something visceral, enough to evoke an emotional response regardless of how much the victim fights against him, and regardless of any other extenuating circumstances.

Indeed, at the John Smith’s Stadium on Saturday, Lanzini’s moment of impudence was met with reckless attacking abandon from the hosts, to the point where gaps were left in a defence which had restricted visitors to one goal or fewer in eight of their previous 11 home league games.

Who was on hand to take advantage? You guessed it.

The subject of showboating is particularly pertinent in the week of the birthday of former Mexico star Cuauhtémoc Blanco.

His signature move, the Cuauhtemiña (or ‘bunny-hop’, to English audiences) might not have been as stylish as a well-executed rabona, but it was no less visually arresting.

Imagine being on the receiving end of the Cuauhtemiña. You’ll often share your shame with a team-mate, such is the nature of a hop between two players at once, but this doesn’t halve the impact: if anything it doubles it, by virtue of coming from a place where you ought to be twice as likely to find a solution.

Similarly, victims of Kerlon’s trademark seal dribble ought to have gained strength in numbers.

The reality couldn’t have been more different, however, to the point where an outright body-check or trip becomes the best estimation of an answer; a route out of embarrassment where offering the skill-merchant a 50:50 chance of success is outweighed by the downside of calling tails and being left scratching your heads.

And, of course, knowing it’s coming doesn’t make it any less containable.

Not everybody appreciates such shows of skill, of course – Neymar was criticised for showboating during a 5-1 win for Barcelona in 2016-17 – but with these players it’s almost never flair for flair’s sake. There’s always an end goal, even when it doesn’t seem like it

A poker player might make an outrageous bluff early in a tournament, as if to tell his opponents he’s capable of anything, in order to make sure he gets paid later on when he makes a real hand and the stakes are higher, and the same subtle coercion applies here.

By attempting the rabona, Lanzini knows his opponents know he may try it again, and he has the advantage of being able to act on that knowledge before others can work out whether he is about to stick or twist: showing him onto his left foot won’t work, because even when he’s on his left foot he’s still on his right.

Footballers will generally grow up being the best player on their school playground, and that counts double for those with feet as quick as Lanzini’s or Blanco’s, and those who struggle professionally are those who fail to adapt to no longer laying claim to that honour.

Can you name the 30 Argentinian players with the most PL appearances?

The most successful, however, can acknowledge this shift while retaining a key component of their upbringing…that one key to success which begins in the playground and never goes away: the ability to let their opponent know, either subtly or overtly, that people are watching.

While Jonas Lössl might have comfortably dealt with Lanzini’s rabona, he played the rest of the game knowing a little more mustard on the shot would have left his helpless face permanently etched on highlight reels – much like West Ham’s own goalkeeper Joe Hart after he was beaten from halfway by Everton’s Wayne Rooney.

This can prompt a relentless backlash – as shown by Deeney and Watford last season – but it’s equally capable of leaving an opponent distracted and open to exploitation.

It’s the same in the playground – while the crowds might not be in their thousands, or even in three figures, no one who sees it will be able to forget it…or avoid letting you know they saw it first-hand.

On the surface, juvenile tricks and flicks might seem pointless when they don’t lead to goals, and open to reactions even when they do. However, there is often far more at play.