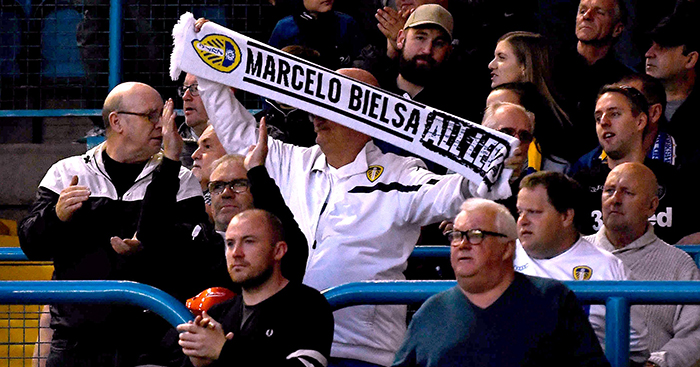 The most memorable goals might be those which have the greatest significance in the biggest games, but football is about more than that.

Whoever first said goals are overrated was close to solving football, but they weren’t quite there: it’s the results, not the goals, which are given too much credit.

Leeds United’s reputation among fans of a certain age was – as with so many teams – largely shaped by a broadly successful era, a time in which the team was more than willing to shithouse its way to victory at the expense of more…let’s say ‘likeable’ opponents.

Which makes it a relief that they’ve seen the light and figured out what football should be about. That’s right, fantastic team goals which count for absolutely nothing because they arrive in otherwise dull and uninspiring defeats.

Brazil’s great entertainers of 1982 gained a level of immortality purely because they didn’t win it all, and the same goes for José Pékerman’s 2006 Argentina squad – but losing to Italy or Germany off the back of some sensational possession football feels like a half-arsed job.

Doing it in a defeat at Blackburn? Well, that’s just reinventing the wheel only to use it to drive your second-hand car to the dump, hoping the one stand out element will distract everyone from the failures that surround it.

It’s easy to lump praise on Marcelo Bielsa for refusing to compromise on style in the Championship, but just because it’s the easy option doesn’t mean we shouldn’t take it. We can leave the more complicated bits to, well, Marcelo Bielsa’s Leeds United.

This is not a case of Bielsa parachuting the 2011-12 Athletic Club squad to play his brand of football, or swapping out Championship veterans for Chile’s class of 2010: the move begins with Kalvin Phillips and Pontus Jansson passing it around the back, before goalkeeper Bailey Peacock-Farrell and captain Liam Cooper eschew the long-ball option in order to keep possession.

With the clock running down on the first half, punting it long to avoid conceding a second might have been the percentage option – the smart option, even.

However, at every level of football, the best achievements come from the riskiest or even stupidest beginnings.

George Weah’s famous goal against Verona began with him waiting in what would normally have been a completely useless position when an opposition corner came into the box, while Rivaldo by rights should have not been trying to get a shot away against Valencia in 2001.

On the balance of probabilities, Peacock-Farrell should probably have kicked long and given his team-mates time to regroup at half-time, but we’re glad he didn’t.

Every part of the Leeds move is carried out with an endgame in mind, and in this case the key is an opening salvo less death by one thousand cuts than embarrassment by one hundred.

The game of keep-ball begun by Phillips and Jansson is akin to a young bully stealing your toy and riding away on his bike, only to slow down every few seconds and fool you into thinking you can catch him if you just run that bit faster.

Eventually you’ll twig that the extra energy isn’t worth expending, and the equivalent here comes later in the move with Blackburn’s defenders giving Samu Sáiz a wide berth.

Corry Evans is the frustrated pursuer, having a nibble only to see Sáiz step on the pedals of his BMX just early enough to make good on his escape, and the Northern Irishman opts instead to hope his opponent has a lapse – either in judgement or morality – and returns the contraband perched perilously-but-not-really on top of the handlebars.

Evans doesn’t necessarily believe this approach will lead Sáiz to see sense – he’s simply run out of other ideas and is hoping for the best.

Instead, the Spaniard sees how easy it was to get away with it the first time and pushes for more, finding Gaetano Berardi who plays the ball across to give Mateusz Klich a tap-in.

Even the finish is unnecessary to the point of being more necessary than you could possibly imagine.

Could Berardi have brought the ball down himself or just finished first time? Of course. Should he have done that? Absolutely not. Leeds gain nothing from making Klich the man to finish off the move, aside from the knowledge that they can.

Leeds have scored more eye-catching goals this season, at least to the casual viewer, with Klich’s long-range curler against Sheffield Wednesday a prime example.

But anyone can have days where they connect perfectly from way out and make a goalkeeper look ordinary – it’s different when the superiority is exerted over 11 players rather than just one.

Rather than dealing with an opponent through your own force of will, this sort of goal from Leeds makes an opponent think they need to do everything right and find themselves up against a charitable version of Bielsa’s squad.

Had the Yorkshire side turned Klich’s goal into the springboard for a victory, they’d have been doing themselves a disservice, and we can go one step further and say a season ending in promotion would ruin their legacy.

Bielsa has cornered the glorious failure market, be it in the form of the limp Athletic display in the Europa League final or letting Juan – Juan! – help eliminate Chile from the World Cup in another 3-0 reverse, so a sudden reversion to sensible football and percentage play would make us feel like we were getting short-changed.

Long live this new, exciting Leeds United – just as long as they don’t do anything off-brand like win the league.