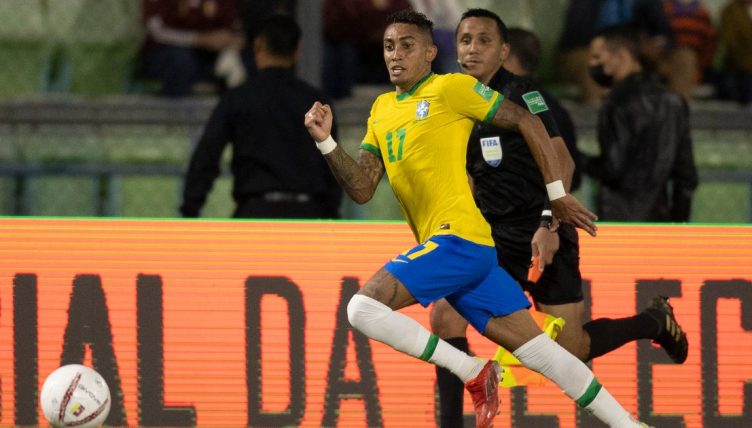 Brazil manager Tite has an idiosyncratic way of expressing himself, and in particular of expressing his thoughts on the beautiful game. So odd is it, that in Brazil his language has its own name, ‘Titese’.

A lot of his phrases come from the tactical jargon of top-level European football but are then sort of semi-translated or Portugueseified and mangled to suit the Brazilian cultural milieu.

There are countless examples and he pulls a couple of them out in almost every press conference. One Tite always returns to is his ‘extremos desequilibrantes’. Literally, it translates as ‘unbalancing extremes’, which, if it sounds weird, is because it also sounds weird in Portuguese.

What does it mean? Essentially, when Tite is wittering on about ‘unbalancing extremes’, he is telling us all that every team needs a tricky winger. A player who gets chalk on their boots, waits for the ball to come to them, isolates their defender one-on-one and then callously destroys that defender’s soul with pace, directness and a pair of glittering feet.

And well, if that isn’t an appropriate segue into the wonderful world of Leeds United‘s magical wide man Raphinha, we don’t think we’ll ever be able to come up with one.

On Thursday night in a hot, humid, half-empty Estadio Olimpico in Caracas, Venezuela, Raphinha finally made his Selecao debut. And in the 45 minutes between him emerging from the bench and the referee blowing the full-time whistle, Yorkshire’s favourite Brazilian showed he is the ‘extremo desequlibrante’ of Tite’s dreams, the man who can sprinkle the Selecao’s bland soup with the special seasoning it so badly needed.

Brazil had struggled in the first half, struggled to defend effectively and struggled to create against Venezuela’s obstinate defence. They conceded an embarrassing goal, but worse, they lacked flair and creativity, they lacked something very Brazilian, if we are to revert to stereotype.

It is something Tite has been repeatedly criticised for. His team have been effective. They won the Copa America in 2019, got to the final again this year, and, before playing Venezuela, had won 19 and drawn two of the 21 World Cup qualifying games he’d coached them in since taking over from Dunga in 2016.

But they are seen as a bit, well… boring. Fans complain that there’s little to get them off their seats, little of the magic you hope for from Brazil. In recent months they have also been too reliant on the creative juices of an increasingly decadent Neymar to lubricate the grinding cogs of their machine.

In Caracas – without the suspended Neymar – it was the same story. At which point: Raphinha. Enter, stage right.

Suddenly, it was on. Raphinha’s first involvement came exactly where you’d want it to: near the corner flag, one-on-one with his defender Oscar Gonzalez. And Raphinha did exactly what you expect, running straight at Gonzalez, jinking inside him and getting a first shot away. It was blocked, but the momentum had already started to shift.

Then came the Leeds man’s first set-piece delivery and it was perfect. A free-kick from the left, with whip and pace. Had Thiago Silva not strayed just offside, his header would have made it one-all.

Then the breakthrough. Another set-piece, another perfect whipped, pacy cross, and the same outcome, only it counted this time. Marquinhos – a man who seems only to score goals when it really matters – popped up at the back stick and nodded it in.

Raphinha’s confidence was flowing and Venezuela’s defence was running scared. So scared, in fact, that when Raphinha picked the ball up on the right and ran at them 10 minutes after his first assist, a mere look caused hulking centre-half Nahuel Ferraresi to fall flat on his arse.

Raphinha played it to Vinicius Jr, whose shot was saved and collected by Gabigol, who won a penalty. Morally, if not technically, the assist was Raphinha’s again.

More direct running, more crosses and more shots followed, but to no avail. Then another moment of brilliance, this one perhaps the best, if unrewarded.

Raphinha cut inside on this occasion and, with a little bit of space, he saw Gabigol curving a run in behind. Then came the dinked, lobbed, velvety smooth through ball that didn’t quite get the finish it merited.

Finally, to top it all off, Raphinha burst past Gonzalez again in the depths of injury time, was found by Emerson Royal and crossed with the outside of his left boot for Ajax’s Antony to tap home from close range.

It was an international debut that Raphinha had endured a painful wait for. He was called up in September but not allowed to travel because of Covid restrictions. “I got upset, yes,” he told Globo Esporte at the time, “because defending the national team is a child’s dream and who doesn’t think about it?”

Here, he finally got to fulfil that wish. And asked to do a very specific job by Tite, he couldn’t have been any more ‘desequilibrante’.

Brazilian football Twitter has gone into overdrive after fans finally got the excitement they desired. Raphinha is their new darling, their automatic first-choice winger after just 45 minutes in that iconic canary-yellow shirt.

Brazil have dozens of players capable of playing in those wide forward positions, but none quite like Raphinha. Surely Tite will now have to start him in the upcoming games against Colombia and Uruguay.

For Leeds fans, that is sort of sad news. With 34 hours between the Uruguay fixture and Leeds’ next Premier League game with Southampton, it’s unlikely he’ll feature.

But when he does return to the West Riding, you can be sure the Selecao’s newest sprinkler of magic dust will do so with a spring in his step.