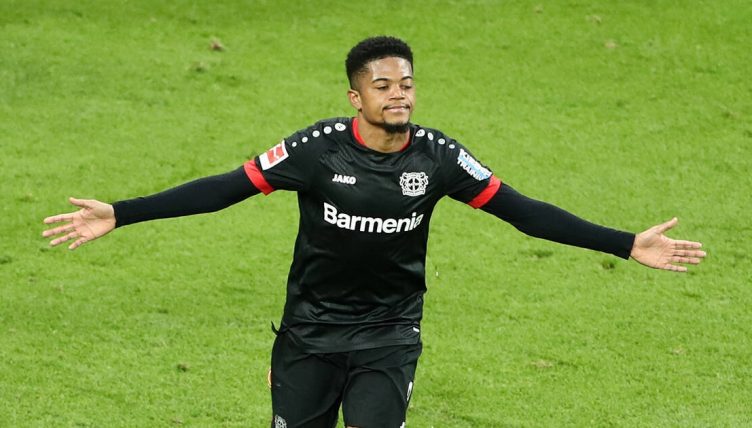 And you’d imagine Ed Woodward is desperate to avoid a repeat of last summer’s will-he-won’t-he saga with Jadon Sancho, in which the England international’s name was a daily fixture of the gossip columns before he ultimately stayed put at Borussia Dortmund.

If history looks like repeating itself this year, United could do much worse than cut their losses and look elsewhere. How about another dynamic young attacker tearing it up in the Bundesliga? Look no further than Leon Bailey.

The 23-year-old Jamaican has predominantly played on the right side of Bayer Leverkusen’s front three this season, but he’s been versatile enough to play across the frontline, or deeper, dropping into midfield.

Playing just off centre-forward Patrik Schick in Saturday’s clash with relegation-battlers Cologne, Bailey put in one of his finest individual displays of the season, scoring twice and setting up the other in a 3-0 win.

He saved the best until last, with a stunning solo effort to round off the scoring in the 75th minute.

Leon Bailey, what a talent 🤩 pic.twitter.com/kabEVlhzmi

Bailey did well to hold his run to stay onside, but he was still deep and wide when he received the ball. From the first touch, there was just a ruthless single-mindedness, getting his head straight down and striding towards the box.

He skipped past the first challenge as if the Cologne defender exist, and didn’t make it look any less easy from there, perfectly judging when to cut inside before smashing it home.

Just six seconds passed between Bailey receiving the ball and it ending up in the back of the net. He’d taken seven touches, each one purposeful and efficient.

Up to eight goals and seven assists in the Bundesliga this season, Bailey has already matched his best tally of 15 goal contributions from his breakthrough 2017-18 campaign, and could well go on to reach double figures for both.

Given he’s still young, it’s easy to forget Bailey already has over 150 appearances for Leverkusen under his belt, and over 50 more with Genk prior to his 2017 transfer.

After a couple of seasons in which he struggled to make an impact, having dropped to the periphery under Peter Bosz, the Jamaica international now looks back to his best, consistently realising that early potential.

If you’ve kept vaguely abreast of the rumour mill over the past 18 months, Manchester United appear to have their hearts set on their number one target. But they don’t need to look far to see glittering talent elsewhere.

The four players Man Utd have signed from the Bundesliga: Mkhitaryan, Kagawa…