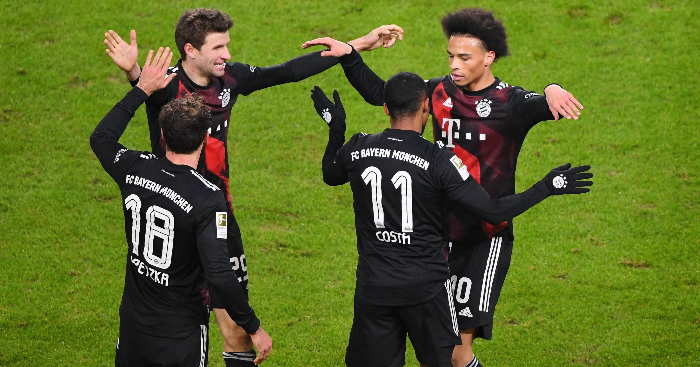 When Leroy Sane arrived at Manchester City in the summer of 2016, he already had a reputation as one of the brightest talents in European football.

Commanding a sizeable fee of £37million after breaking through at Schalke, big things were expected of Sane at the Etihad when he walked through the door as a 20-year-old in the same summer as Pep Guardiola.

It would be difficult to argue that his time in English football was anything but successful. From his three proper, uninterrupted seasons at City, he won two league titles, two League Cups and the FA Cup, registering 25 goals and 28 assists from 90 Premier League appearances.

He also scored a memorable match-winner against Liverpool back in January 2019, a goal that proved pivotal in deciding the most relentless title race English football has ever seen as City finished on 98 points, one ahead of Liverpool.

Nearly two years have passed since then, and it remains arguably the defining moment of his career so far.

I think this video perfectly captures Leroy Sane's time at City. You've got him being careless on the ball and Liverpool getting through on goal and then you've got his killer instinct in the final third – scoring a practically title-winning goal.pic.twitter.com/SpnTASitq9

It was also to be one of his final big contributions for City, as Guardiola began to turn to others in his place during the title run-in that year as rumours of Bayern Munich’s interest began to emerge.

He was only a late substitute home and away in the Champions League quarter-final against Tottenham as City were eliminated.

Amid the will-he-won’t-he transfer saga back in the summer of 2019, the question was settled when he suffered an ACL injury in the Community Shield, sidelining him for almost a year and delaying the prospect of a move to Bavaria.

A solitary 11-minute cameo to help see out a 5-0 thrashing of Burnley the following June was the only appearance he made in a City shirt since then.

Bayern came calling again a year on, and the lure of playing for his homeland’s biggest club evidently proved too tempting for the player, becoming City’s first, and as yet only, prized asset to snub the club for pastures elsewhere during the Sheikh Mansour era.

A new chapter at Bayern

For all his brilliance at City, there remains a niggling sensation that he’s not yet the consistent, week-in, week-out world-beater he’s always looked so capable of becoming.

Having put his horror injury behind him, there’s hope he’ll fulfil that potential exactly where he wants to be.

It’s incredibly demanding to join the reigning treble-winners, a side looking for their ninth consecutive title, but there’s a place for him in the team after Ivan Perisic and Philippe Coutinho returned to their parent clubs over the summer.

But he’s had to be patient so far, with more appearances off the bench than in the starting line-up.

“But like many others, he had some unnecessary ball losses against RB Salzburg but there are reasons for that, we talked about it. He will try and do better in the next few games.

“When he comes in, he gives us a new dynamic and he is always there to get a goal. It’s clear that after his long injury, he still needs something but he’ll get time. We’re counting on him.”

Flick’s criticism of his tendency to lose possession is an echo of a sentiment shared by Guardiola whilst he looked at the peak of his powers.

“After the simple things he loses the ball and against these kind of teams when you lose the simple balls always they kill you,” the City coach said after Sane’s match-winning goal against Liverpool.

That principle applies even more so in the Bundesliga, with a high proportion of direct and incisive counter-attacking teams.

It’s an issue that he will still need to iron out of his game completely if he’s to earn Flick’s trust at the Allianz and begin starting every week.

But there can be no doubting what he can do with the ball at his feet, while he looks determined in every opportunity he gets to demonstrate that attacking prowess.

Bayern on the counter-attack is a problem 💨

Leroy Sane subs on and finishes in style for their third in #DerKlassiker 🔥 pic.twitter.com/pUHdSB0DX4

Since scoring and providing a further two assists on his Bayern debut in an 8-0 mauling of Schalke, he’s shown an explosive impact in subsequent chances from the bench.

In October, he scored within four minutes of his introduction to score Bayern’s fourth in a 5-0 victory over Eintracht Frankfurt – a trick he keeps repeating again and again off the bench.

It took nine minutes for him to score against Red Bull Salzburg, 11 minutes to score a vital winner in a 3-2 victory over Borussia Dortmund, six minutes in the reverse fixture against Salzburg and 18 minutes to set up Douglas Costa’s goal to make it 3-1 at Stuttgart on Saturday.

That averages out as a goal or assist every 42 minutes between the Bundesliga and Champions League this season. Six of Sane’s 10 appearances for Bayern this season have come off the bench.

His stunning turn of pace and singleminded confidence when running straight at the opposition make him the world’s most lethal impact sub when games are stretched and defenders’ legs are tired.

If he can be trusted to take care of the ball a bit more closely, while maintaining that same ruthless dead-eyed streak when running at goal, then it’s only a matter of time before he’s starting regularly again.

If so, The sky’s the limit.