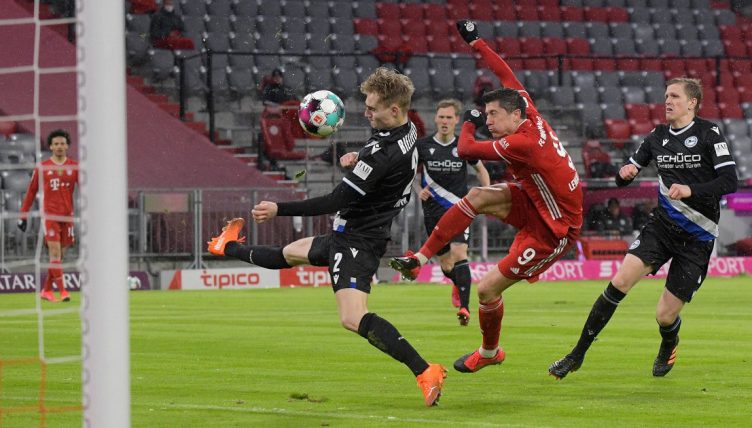 Whenever a player from a lower or lesser league does something outstanding there is a suggestion that the moment of sublime brilliance doesn’t get the attention it deserves because of the lack of fame of the author.

“If that was Messi,” they type, “we’d be talking about it for weeks.”

“If Cristiano Ronaldo had done that,” they say, “you’d never hear the end of it.”

In reality, though, nothing could be further from the truth. When lower-level players do something exquisite, we are drawn to it and talk about it precisely because it is unexpected. When Messi or Ronaldo do something sensational, we think, “Again. Not again!”

Their magnificence is under-celebrated if anything, banalised because it is so frequent. And increasingly supreme moments of skill from Robert Lewandowski are condemned to the same fate.

And he did – again – on Monday night as Bayern Munich drew 3-3 with relegation battlers Arminia Bielefeld; this one truly spectacular even by his stunningly high standards.

Bayern were 2-0 down by the break after a floundering first half in the snow. It was a surprise given the quality of the opponent, but then again, a little lethargy could be forgiven.

Bayern had beaten Hertha on February 5, spent a night inside a plane on a runway in Berlin, flown to Qatar for the Club World Cup, played twice in the burning heat, won their sixth trophy in eight months (which Lewandowski celebrated with a typically cringeworthy tweet), and then were back in Munich for a fourth game in 12 days in sub-zero temperatures.

That should be enough to entirely discombobulate anyone, but Lewa was not thrown off his usual course.

Three minutes after the restart, there he was, perfectly poised to get Bayern back into the game and add to the two goals he had scored in Western Asia.

A fairly straight ball was floated into the box by David Alaba and, frankly, there was nothing on. Not for a normal player, anyway. Bayern’s Polish superstar had his back to goal and was positioned with a defender both in front of and behind him.

No matter. He controlled it on his chest – cushioning it up rather than down – and as it floated in the air around head height, adjusted his body underneath it, planting right foot then left, before swinging a long right leg up to shoulder height and, with automaton-like accuracy, hooking a perfect volley into the corner of the net.

It meant Lewandowski has scored 32 in 34 for club and country this season, to add to his eight assists, and 25 in 20 in the league – eight more than the entire Arminia Bielefeld team. They are numbers to make the mind boggle.

Bielefeld went on to score almost immediately to make it 3-1, but the momentum had shifted and Bayern eventually drew level through Corentin Tolisso and a fine Alphonso Davies volley.

The draw was not the perfect result, but Bayern remain five points clear of RB Leipzig atop the Bundesliga and with Lewandowski on their side, there’s little chance they relinquish that advantage.

The Poland No.9’s brilliance might be expected, and because it’s expected, it might occasionally be greeted with a shrug.

But we should celebrate it. Every. Single. Time.

Retweet and share, shout about it from the rooftops, send the video to your mates on WhatsApp or your uncle or aunt on Facebook. If you’re still young enough to get away with it, go and try to replicate it in the park.

Lewa might be the king of naff on social media, but he is magnificent on the pitch. He deserves the adulation.