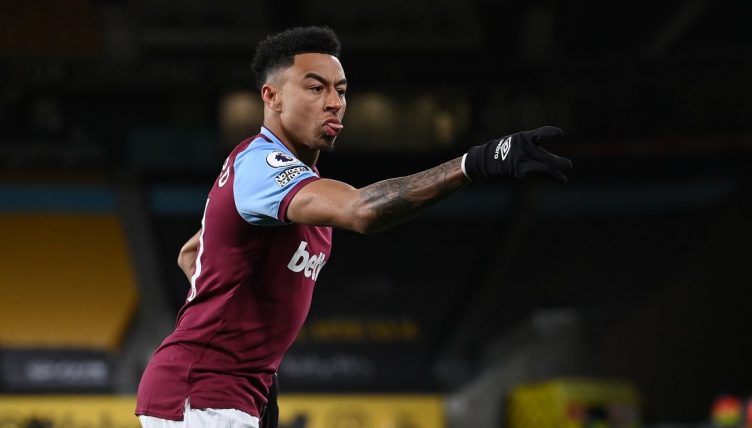 If you advance 60 yards up a football pitch at full tilt and stick the ball in the net but no defenders try to stop you, does it go down as an incredible solo goal?

It is one of the great philosophical puzzles of our time, one only a handful of people have ever tried to solve. To tackle it requires courage and conviction, as well as an extremely acquiescent opposition defence.

Hatem Ben Arfa bravely attempted to supply us with an answer to the query against Bolton in 2012. But with everyone still a little unsure almost a decade on, West Ham‘s rejuvenated superstar Jesse Lingard took the task upon his shoulders on Monday night at Molineux, valiantly thrusting himself forward against the thoroughly cooperative Wolves backline to provide the definitive response.

With the scoreboard still blank and just six minutes on the clock, Lingard received the ball in the middle of his own half with nobody within 15 yards of him.

He turned and, seeing Conor Coady and Romain Saiss retreating obsequiously like a pair of medieval servants who had displeased their king, Lingard knew that this was his time to give us a reply to that most confounding of conundrums.

He sprinted forward, Leander Dendoncker chasing him with the alacrity of a Sunday league midfielder who had warmed up for the game by wolfing down a large portion of chips with curry sauce and smoking two Richmond Superkings.

Coady and Saiss continued to back off, the England defender completely distracted by the cross-pitch run of Michail Antonio. And by the time Saiss thought, ‘Ah, shit, I should probably do something about this,’ Lingard was one-on-one with Rui Patricio.

The Portuguese ‘keeper rushed out, made himself as small as possible, and Lingard tucked it into the back of the net to finally put an end to years of pondering and speculation.

So: if you advance 60 yards up a football pitch at full tilt and stick the ball in the net but no defenders try to stop you, does it go down as an incredible solo goal?

The answer, Jesse’s fine work has informed us, is no.

We are, of course, being facetious. Lingard’s goal was impressive for its athleticism and the calm, controlled finish.

But it was just a single element – and not even the best element – of a wonderful overall performance, one that maintained his heart-warming resurgence and kept West Ham’s Champions League dream well and truly alive.

And to make it 3-0 before half-time, he provided his finest individual moment of the match.

Lingard picked up the ball in his own half, in a similar position to that he had taken up for the opening goal. But with five Wolves defenders around him this time, he knew that going it alone was not an option and that space would inevitably be open elsewhere.

Lingard got his head up and threaded a delightfully weighted ball through to Jarrod Bowen, who burst into the box and hammered a shot past Patricio at his near post.

Lingard with some more brilliant work 👏

He lays it off for Bowen to score West Ham's third in the first half!

Wolves have a ⛰️ to climb 😳

That pass made it four goals and three assists in Lingard’s last five club games.

If the 28-year-old keeps this up until the end of the season, it will be impossible for Gareth Southgate not to get him on whatever means of transportation England are using to get their squad together at St. George’s Park for the Euros this summer, completing the comeback story of 2021.

And the longer Lingard’s supercharged loan spell in London goes on like this, the better this looks as a bit of business from that well-known master of football’s unforgiving transfer market Ed Woodward.

If Lingard fires West Ham into the Champions League positions at the expense of Liverpool, Chelsea and Tottenham, Woodward will have shown us he is the Midas of the market once more.

Not only will their main rivals be shoved away from Europe’s top table, left to scrabble around for the Europa League and Europa Conference crumbs, United will go into next season with one of Europe’s in-form attacking midfielders at their disposal.

As Gary Neville said on Sky Sports post-match: “Manchester United have sent him out to West Ham to boost his career, maybe with the thought of boosting his price tag, but they might be thinking, ‘Actually, we might want him back, he could be a real help to us.'”

Whether Lingard wants to go back, though, is another matter. In the East End, he is being asked the big questions and is coming up with the answers every time.