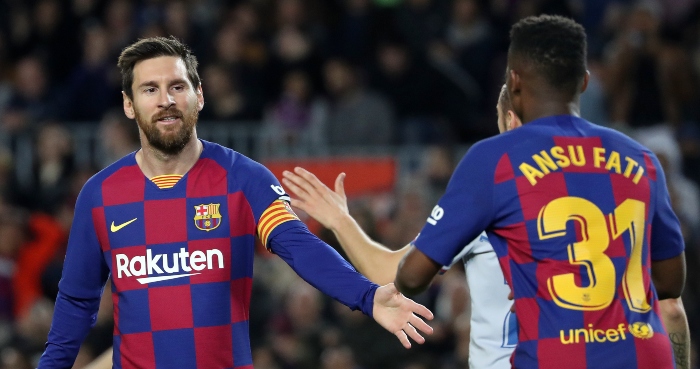 It hasn’t been a vintage league season for Barcelona, but when you have Lionel Messi in your ranks there’s no way for an opponent to feel safe.

Levante were Barca’s latest victims, sitting level for half an hour until the Argentine decided “no, we can’t let this happen”.

Two minutes later, he’d set up not one but two Ansu Fati goals, and reminded us that, if we want to try to write him off at any point, we’ll always need to ask his permission first.

We really ought to know by now that the idea of ‘containing’ Lionel Messi is a myth. You can attain the illusion of containment on those occasions when he lets his guard down, but, make no mistake, that never had anything to do with you.

In 24 games this season, Messi has 19 goals and 12 assists, a return which looks all the more impressive when you remember he failed to score in any of his first four outings.

The last time he failed to average more than one goal contribution per 90 minutes was back in 2007-08, more than a decade ago, when he was just 20 years old and still comfortably hit double figures for both goals and assists.

And, of course, even when he isn’t scoring, he’s doing things like this.

🔥 A quickfire double from Ansu Fati!

🤤 What a pass from Messi to set the first goal up too! pic.twitter.com/jrbf7dbUmX

With the pass to Fati, Messi takes what a normal person would consider to be multiple calculations and condenses them into one.

Fati’s run; the movement of defenders; the trajectory of the ball; the pace required. These are all separate bits of maths for mere mortals – by the time you’ve checked everything out there’s every chance you rush one part of the process, and that’s all that’s required for you to get it wrong.

When you’re Messi, though, you can do on autopilot what others will need to practice day and night to perfect even once.

To consider it ‘defence-splitting’ would require you to accept he sees the Levante back-line as an obstacle to begin with. But does he even see the defenders at all anymore? For him, it’s more a case of determining the endpoint and trusting that he’ll be able to find the destination he wants purely because he’s always been able to.

When a player approaches the twilight of his career, instances of failing to reproduce what once came naturally can ultimately result in a spiral of self-doubt. With Messi, though, there’s a sense that any such failure will be written off by him as just a glitch in the matrix. Everyone else was wrong, not him, and things will right themselves next time.

This is how he can produce moments which for mere mortals might be considered once-in-a-lifetime moments of genius. He looks at this kind of devastation as normal, to the point that failure to pull it off is the exception.

It’s like a darts player frustrated at being unable to produce a nine-dart finish at will, or a snooker pro failing to clear the table in one go and deciding something must have gone horribly wrong. When perfection is normality, you’re not going to stop striving for it, and you’re going to keep looking for new ways to bring it into being until you’ve exhausted them all.

Messi’s second assist for Fati was hardly easy either, though after the brilliance of the first it feels like more or less anything would be a bit of a letdown.

A driving run into the box, coupled with the sort of vision that allows you to trust the ball will remain glued to your feet is the kind of thing you can only really do if you’re Lionel Messi. You need the faith in your own abilities, sure, but you also require others’ acceptance of that ability to help develop an aura around yourself.

Being able to produce the goods without even seemingly paying attention feels like a good way to ensure the latter, and the first assist for Fati – coupled with the years and years of similar moments under pressure – is more than enough to buy you space to perform: when the defenders know you’re just as effective under extreme pressure and under none whatsoever, you’ve earned your freedom to pick your spot.

Barcelona have long attempted to find a contingency for the idea that Messi won’t be around forever, but in doing so they’ve yet to capture the chief problem of life without Messi: namely that there isn’t an answer you can arrive at by traditional means.

It’s not a case of replacing what he does, because you simply can’t do that with a generational talent. Even by finding an analogue for every single component of his game, you’re still left with a gap unless you come to appreciate the intangible quality associated with simply Being Lionel Messi, that quality of being impossible to get near and the ability to counter any reasonable attempt to blunt his powers. It might not be a quality he has always had, but it’s one he is destined to leave behind when he goes.

Instead of trying to be less reliant on Messi, there’s no harm in arguing Barcelona should embrace an even greater over-reliance on their talisman. This is arguably especially true of the 17-year-old Fati, whose time in an XI with one of the greatest ever is limited.

If someone’s irreplaceable, ignoring his majesty when you have it at your disposal feels like a waste.