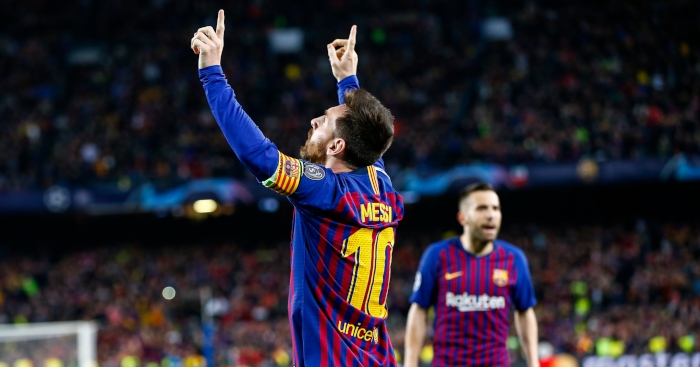 This might be a bit out there, but we reckon Lionel Messi is pretty good at football.

The Barcelona man helped his team put one foot into the Champions League final on Wednesday night, scoring twice in a 3-0 victory over Liverpool in the first leg of their semi-final, capping it off with an outrageous long-range free-kick.

He is a human cheat code, regularly pulling off multiple feats in single games which, if they were performed by other players, would be considered career highlights. It’s on these nights when we get a real feel for what the term “generational talent” actually means.

Messi has shown his free-kick prowess plenty of times already this season, not least with a strike against Espanyol so pure it left goalkeeper Diego López in visible need of a hug.

Critics of Liverpool goalkeeper Alisson can split hairs about the Brazilian’s positioning or his wall at Camp Nou, but to do so is pointless – even if he had done everything perfectly, he wouldn’t have stood a chance.

If Messi decides he wants to do something, he will do it. He announced back in August that he wanted to end the season holding the Champions League trophy aloft, and who is anyone to stand in his way?

The free-kick was essentially a microcosm of the entire game. Liverpool did everything they wanted to and everything they were supposed to, and it might have been enough to stay in the tie ahead of the return leg at Anfield were it not for Messi.

Sadly for Liverpool, Messi has never been constrained by rules over what *should* be possible.

The wildest thing about it all is that, by his own high standards, Messi didn’t have the best first half.

But a quiet 45 minutes for Messi is still a busy 45 for most other players, and he still produced one piece of brilliance which most would be happy to consider the highlight of their performance on any given night.

You’d probably warn most players to never, under any circumstances, try to play your way out from the right-back position with flicks and tricks. However, if you’re smart, you’ll know to never tell Lionel Messi what he should and shouldn’t do.

If Messi wants to eat chips with ice cream, you let him. If he wants to wear hats on his feet, you shrug your shoulders and assume he must have his reasons.

Along the same principles, if he decides to do anything, anywhere on the pitch, you just wave him through. He wouldn’t be doing it if he didn’t think it was the best thing to do, and he knows more than you for the simple reason that you are not Leo Messi.

A goal as good as the second-half free-kick is the sort of thing you look at and consider the move which caps a performance for the ages. It feels like the game should stop there and then, in acceptance of the fact that it can’t be surpassed.

No one remembers anything that happened in England’s 1996 victory over Scotland after Paul Gascoigne made it 2-0, despite there being 11 minutes left on the clock.

Similarly, there were technically 12 minutes remaining when Wayne Rooney sent a bicycle kick out of the reach of Joe Hart in February 2011, but the reality was that the remainder of the game was spent waiting for the formality of the strike gaining the winner status it was owed.

Messi, however, doesn’t play by those rules, mostly because we can never look at anything he does and believe with any confidence that it’s the pinnacle of what he can achieve. We’ve been stung too many times to go down that route.

And so, when he pulled off the sort of run that only Messi and a handful of others can, somehow a jink, a twist and a burst all at once, we almost knew he was only just getting started.

You’ve probably seen some figures going round about Messi’s goalscoring record over the course of his career.

The otherworldly numbers. The average – average! – of more than 40 goals a calendar year for nearly a decade and a half.

To do this at all, even with nothing more than tap-ins, would be an achievement for the ages. But Messi has found a way to incorporate so much brilliance that we can guarantee he’s scored goals you’ve forgotten within seconds which are better than the best goal ever scored by 90% of professional footballers in the world.

We know he’s brilliant, but it’s worth repeating just how much he really is in his own league. Here’s another way of looking at it:

We often talk about appreciating players like Messi while we still have the chance to watch them in their prime, applying the self-evident logic that, eventually, age will catch up with them and restrict their brilliance to mere memories.

Messi will turn 32 in June, and few players as great as he was as a teenager have been able to sustain their quality long into their 30s. There should be an end-point not too far away.

Yet instead of slowing down and gathering sustenance for the winter of his career, he is taking on more responsibilities and pushing for excellence as much as he ever has done.

Instead of collecting nuts and seeds for when the cold snap hits, he’s bludgeoning the biggest animals to death and feasting on their carcasses in the moment, confident this success will give him the confidence to keep doing the same when he’s expected to go into hibernation.

So yes, we should appreciate Messi while we have him, but we can’t completely rule out the idea that he might keep going years or even decades beyond his natural end-point, rubbishing everything we’ve ever heard or witnessed about football, athleticism and the human body as a whole.

When you’re the one inventing the rules and changing how the game is played, why should anyone else be able to tell you it isn’t forever?

Nine transfers Barcelona missed out on – and who they signed instead