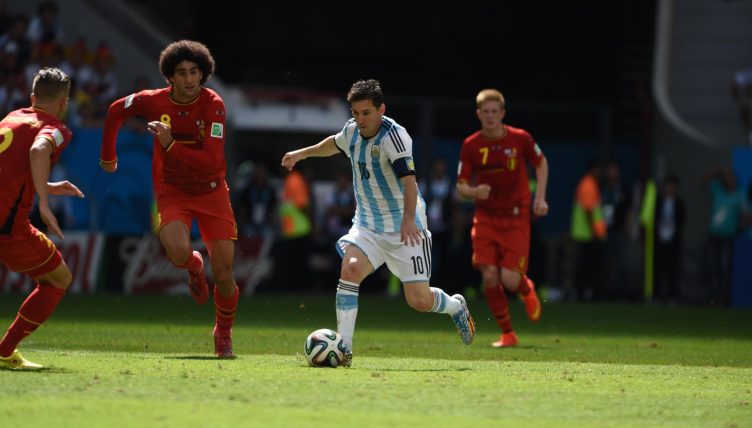 We don’t quite know how many passes that Lionel Messi has completed in his career.

Much as we’d love to, we’re not going to sit and rewatch his 1000 career matches to count them all.

According to WhoScored, with data in most but not all competitions going back to 2009-10, he’s registered over 34,000. If we’re to include all competitions for club and country over the course of his entire career, he must’ve completed at least 50,000 at the very least.

Fifty per appearance is our very most conservative estimate, given he completed 91 passes in the 2011 Champions League final – the most of any player on the pitch, and over twice as many as any Manchester United player. Javier Hernandez, who played 90 minutes leading the line for Sir Alex Ferguson’s side that night, completed 13.

“Never mind Messi’s goal scoring records. Never mind that Messi’s the best dribbler ever. Messi’s also the best passer the game’s ever seen,” Gary Lineker tweeted back in 2015. It’s not easy to disagree.

Of those 50,000+ passes, 348 have gone down as assists. OPTA haven’t logged the data for every competitive football match in every league in history, but we’d be astonished if anyone’s beaten that. By the official tallies, he comes out on top.

Terrifyingly, it might have been a whole lot more. Messi’s blessed to have been the supplier to some of the greatest forwards in history – Samuel Eto’o, Thierry Henry, Luis Suarez, David Villa, Neymar and Kylian Mbappe to name a few – but he’s also created his fair share of chances that went unfinished.

Perhaps the greatest would-be assist – and arguably the very best of his many, many passes – was supplied to Angel Di Maria during the 2014 World Cup.

In all honesty, Messi probably didn’t deserve to lift the Golden Ball award for best player in Brazil that summer.

He was electric in the group stages, scoring four goals, but failed to notch in the knockout stages, while his assist for Di Maria’s winner against Switzerland in the Round of 16 was the only goal he directly set up that tournament.

Lionel Scaloni’s Albiceleste tired as Brazil 2014 wore on. They struggled to produce scintillating football, relying more on being attritional, dogged and organised. Even in that context, not at his best, Messi was capable of producing moments that took your breath away.

Picking the ball up in his own half – a sight we’ve become more accustomed to over the years as he’s adapted more and more to being a playmaker – in the quarter-final against Belgium, Argentina’s No.10 used the rare moment he’d been afforded by Marouane Fellaini to look up and assess his options.

Someone with a PhD in geometry could’ve had the best seat in Brasilia’s Mane Garrincha stadium that night and not seen what Messi did at ground level.

With a quick shimmy, he turned inside before executing the most perfect of passes. Not only did he thread it perfectly between the two midfielders pressing him directly, but he weighted it perfectly, curving it round a helpless Vincent Kompany, desperately dashing back.

The ball arrived to meet Di Maria’s stride. Instead of dashing forward and trying his luck against Thibaut Courtois from a more acute angel, the winger instead cut back inside, allowing the covering Kompany to block the shot and rob us of one of the greatest assists in the history of the sport.

As with his brilliant long-range strike against Mexico, it was the aerial view that allowed us to appreciate the majesty of Messi in all its glory. A beautiful camera manoeuvre move swept up the pitch and followed the pass as it cut through Belgium’s backline.

“I threw him a turd, but he always finds solutions to everything,” Di Maria – the only other player to remain from Argentina’s 2014 runners-up – said after setting up Messi’s goal against Mexico.

“What matters is that the ball got to him. We had spoken a minute before [the goal]. He said they were dropping deep, narrow, inside [the box] and so the space in front of them would appear, to try to give it to him there.

“I waited for that moment to appear and gave it to him. And he scored a tremendous goal. I don’t have words anymore. I have had the chance to play with the best player in the world at club level, and for 14 years with the national team, and for me Leo is everything.”

Having been lucky enough to be on the end of Messi’s passes, you can see why Di Maria thinks so.