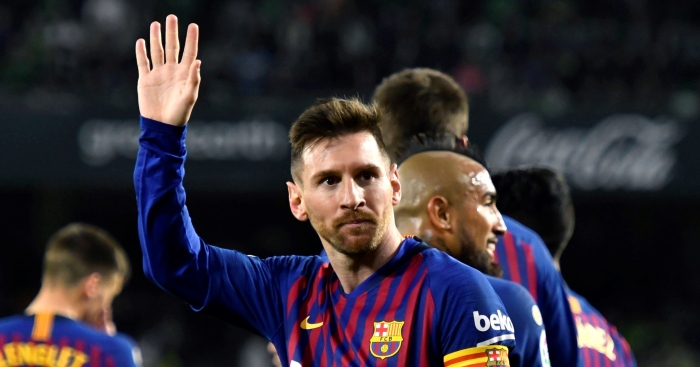 We’ve reached the point in football where fans can wake up to the news that Lionel Messi has scored a hat-trick and simply shrug in acknowledgement.

Of course he has, they’ll think – he’s Lionel Messi, that’s just what he does.

And yet, somehow, he continues to be able to scale new heights and surprise you in ways you didn’t even think possible.

Barcelona’s 4-1 win over Sevilla saw the Argentine break new ground, overtaking Cristiano Ronaldo for career non-penalty goals for the first time. Seeing as Ronaldo had played more than 75 games before Messi made his senior Barcelona debut, that’s no mean feat.

That’s not to say it’s a competition when it comes to which of the pair ends their career with more. Indeed, the fact that it’s not treated as a competition is what allows Messi to score such great goals; to go for the unexpected because it has never been about mere numbers.

This is why, while you’d think it might be boring or uninspiring after a decade and a half, it is anything but.

His hat-trick goal at Estadio Benito Villamarín is a prime example: a finish that reduces the mere concept of expected goals to a quivering mess; the sort of goal where, were it scored by almost anyone else, we’d have doubts about whether it was deliberate. With Messi, though, it is not even vaguely up for debate.

A well-judged chip is always lovely to see when it comes off properly, as we saw with Messi’s Panenka penalty in Barcelona’s Champions League last 16 against Lyon.

On that occasion, the ball was hit so slowly that goalkeeper Anthony Lopes almost sprang back up to the turf, convincing himself there was still an opportunity to recover the ball.

This kind of goal inspires a level of tail-chasing which seems to take place without the goalkeeper even knowing he’s doing it, as if jolted to the ground by Messi’s eyes and rolling out a red carpet above his head.

However, in the win over Betis, Messi somehow exerts the same mind control on Pau López without the keeper even going to ground.

And we talk about players finding the ‘postage stamp’ with top-corner finishes, but Messi might need us to invent a new term for his hat-trick goal in Seville.

It’s as if a letter has been posted with no stamp, no markings and not even an address, with just the words ‘Lionel Messi, Barcelona’ written in crayon on the front, and he’s still been able to pick it out.

Pau has done everything right, cutting out every conceivable angle for a shot and positioning himself perfectly to come off his line and claim the ball if Messi sends a cross into the danger zone.

What he hasn’t realised is you can’t block someone’s path when they’re mentally controlling you like a marionette, and you’re always at a loss when faced with someone who can thread his entire body through the eye of a needle.

It’s no wonder co-commentator Graham Hunter could only sit there and laugh in part disbelief, part admiration. Eventually, you reach the point where there’s nothing left to say.

MESSI HAS HIS HAT-TRICK 👽

That finish is ridiculous, superlatives will never do this man justice. pic.twitter.com/oiuUTuESf5

It wasn’t just the commentator who was lost for words: as the ball clips the underside of the bar and nestles in the back of the net, you can see Barça defender Clement Lenglet put his head in his hands, almost unable to process what he has just seen.

When someone who encounters Messi every day in training reacts like this, you know something special has occurred, and it tells you all you need to know about the man that he can continue to surprise us; that even after scoring more than 500 career goals, there are still things you haven’t seen him do.

The hat-trick against Betis took Messi to 39 goals from 37 appearances this season, and if he keeps up this rate of scoring it’ll be the fifth season in which he ends the campaign with more goals than games. For a player to do that just once in a career is impressive enough.

We could spend our time looking at how his record stacks up to others of his generation, or we could admire his ability to achieve things that no one else of any era is capable of. If we don’t enjoy Lionel Messi when we’re in the midst of his greatness, we’re bound to regret it as soon as we no longer have the chance.