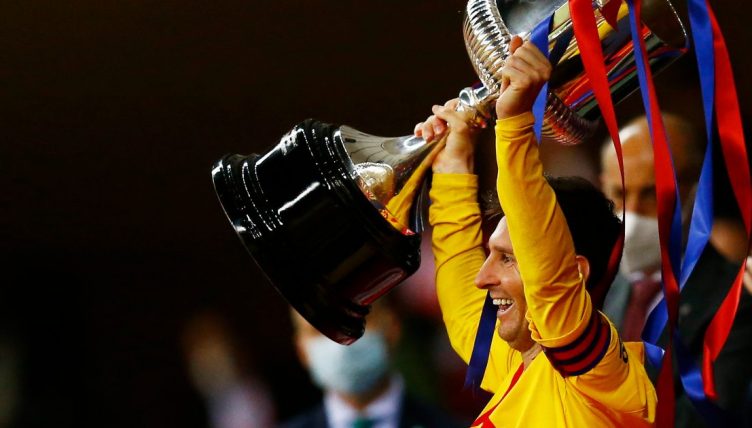 What more can be said about Lionel Messi?

No, don’t click away. Ever since Messi burst onto the scene as a frail but prodigious teenager during the 2000s commentators have fallen over themselves to find new ways to praise him.

But recent years have seen his reputation take, if not a hit, then something of a fallible dimension.

Barcelona’s struggles haven’t helped. As they’ve found new and increasingly creative ways to exit the Champions League, the sight of Messi stood with his head bowed and hands fastened to his hips have come to define a club heading into decline. There’s a reason he was so keen to leave last summer.

Yet the sight of his man of the match performance as Barcelona thrashed Athletic Bilbao 4-0 in the Copa del Rey final was enough to remind viewers of the basic thrill of football.

All the attention will focus upon his second-half wonder goal. This is somewhat understandable; how the movement started in Barcelona’s own half, the multiple exchanges with Frenkie de Jong, the casual step inside and rolling the ball into the corner as if playing a game of garden bowls.

We’ve come to expect all this. We’ve become immune to acts of genius on a weekly basis.

But Bilbao were already a beaten side by this point. They weren’t when Messi dissected their whole defence, sending four players to the job centre in the process, with one perfectly-timed pass.

Messi taking 4 players out of the equation with a perfectly timed pass pic.twitter.com/GyOskIAFKp

Barcelona battered Athletic during the first half but somehow failed to score. The relieved Bilbao players, who were so starved of possession that Comic Relief started preparing an appeal, must have been grateful for the opportunity to regroup and refine their strategy.

Messi had other ideas. He re-entered the pitch in Seville with the air of a prophet about to shape destiny and took only two minutes to break the spirit of the Athletic players.

Sergio Busquets has played for Barcelona for over a decade and is well-versed in keeping the play ticking over. His two-yard pass started events rolling. Upon collecting possession, Sergino Dest found Messi and kept running.

The Argentina captain adjusted his feet and ran. It’s hard to tell whether the opposition simply couldn’t get near him or simply didn’t try but Messi trotted along unimpeded for a short while.

Four Bilbao players eventually closed around him like a vice. Faced with being crowded out of possession, Messi’s options were diminishing by the second. Or so we thought.

Having drawn the entire defence towards him, Messi slipped the cutest of through balls towards the enrushing Dest. The American crossed the Griezmann but goalkeeper Unai Simon made a superb point-blank save to keep the scores level.

Messi may well depart at the end of his Barcelona contract this season but, for old time’s sake, he demonstrated that he remains the best No.8, No.9 and No.10 in world football.