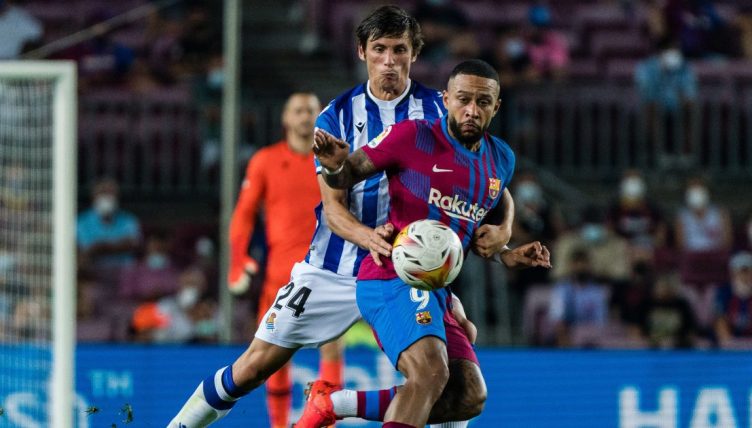 ‘A hard act to follow’ is an idiom that does not even come close to doing justice to the situation Barcelona‘s attacking players find themselves in now.

Lionel Messi – quite possibly the greatest player of all time at one of the biggest clubs on the planet – is on another plane, a being from another realm brought down to bless us with his eternal brilliance.

There is no point trying to imitate him. Nobody will come close. Not now, not ever.

In the little Argentine’s gargantuan absence though, somebody does need to step up. Messi was not just a great player, but the spiritual leader and technical reference point of the Barcelona attack.

He was his team-mates’ first – latterly, some might say, their only – option as an out ball when they had possession in midfield. He was the man who players fans and coaches looked to when Barcelona needed something to happen. Almost always, he produced it too.

Without trying to emulate Messi’s style, skill level or standing, someone now needs to take that responsibility, or at least some of it, on their shoulders. Someone needs to lead the Barcelona attack.

It is no minor burden to bear. But on Sunday evening in the Camp Nou, with 17,000 Messi mourners gazing on from the terraces, Memphis Depay produced a moment that was a clear statement to those in attendance and the Cules watching around the world.

Just three minutes into Barcelona’s first game of the post-Messi era, Memphis dropped in as Barcelona held the ball in defence, making himself a forward passing option for Gerard Pique – taking responsibility, you see.

What came next was the true magic. Pique fired the ball into Memphis’ feet with confidence, knowing his newly-registered Dutch team-mate was more than capable of handling a hot pass.

Memphis proved Pique’s confidence well placed. He had his back to goal, was just inside his own half and had La Real defender Robin Le Normand right on his heels.

Yet with one flick of the outside of his bright orange right boot, using the pace on the pass, all those issues were solved. The ball flew up and over Le Normand’s head. Memphis spun away and was ready to set up a Barca charge.

All Le Normand had left in the tank was to grab the Dutchman around the gob and haul him to the floor. It was a desperation move, the fruit of pure embarrassment.

In just a few seconds Memphis had said one thing quite clearly: I’m here now, and I’m ready to lead this attack.

He won’t be Messi of course. But he showed he has the considerable self-belief required to shoulder some of the burden that playing in the former Barca No.10’s place entails.

It was only the start of a brilliant display too. Martin Braithwaite might have stolen the headlines with two goals and an assist in the Blaugrana’s eventual 4-2 win, but it was Memphis who conducted the attacking orchestra.

Minutes later, the former Lyon man was wriggling his way out of a tight space, winning a free-kick and shifting his side 40 yards up the field. Then came his first assist in a competitive game for his new side.

Memphis whipped in a dead ball beautifully (a dead ball that would have previously belonged to Messi) and Pique headed it into the net.

That it was Pique who applied the finish was fitting – not only had Pique played the pass that allowed Memphis to perform his statement skill early on, but without Pique, Memphis would not have been playing at all.

The horrendous financial issues that forced Barcelona to let Messi depart also meant they could not register new players – not, at least, until Pique took an enormous pay cut on Saturday which freed up room on the wage bill for Barca’s new additions.

Pique’s act was one of a man who will one day surely be president of this grand old institution, an institution that currently finds itself on its knees, cap in hand.

Back to Memphis though and the assist was not the end. As stated, Braithwaite got the goals and the late assist for Sergi Roberto, but Memphis was the artist on the field, involved in everything positive that Barcelona did going forward.

Memphis dropped into pockets in the middle, he pulled out wide to face up full-back, one-on-one. He played balls around corners for team-mates running beyond, the best example being the ball played to Pedri so that he could set up Braithwaite’s second.

Braithwaite gets his second and Barcelona are looking dominant! 🔵🔴

By the time he departed in the 90th minute, brought off for Clement Lenglet, Memphis more than deserved the ovation he was given. He’d shown flashes of his brilliance in pre-season, but this was the first real test. He passed with flying colours.

Even the famously Madrid-focused ‘paper Marca couldn’t resist some praise. Hugo Cerezo wrote: “The No.9 showed his quality and was keen to make things happen and excite the crowd.

“He was also willing to take charge, taking set-pieces… It’s clear why Koeman was so keen to deal in his compatriot and he is going to be fun to watch in LaLiga Santander this season.”

And that gets to the essence of it. Barcelona fans, for all the success they have become accustomed to, are having a rough time of it.

What they need is someone to make them enjoy watching their team, to lead from the front, to take charge. Even if he will never be near Messi, Memphis is starting to show he can provide some spark.