Lucas Leiva had to work hard for his Liverpool success, but he endeared himself to the fans more or less from the beginning.

After serving Liverpool for 10 years, he’ll always be remembered as a fan favourite at Anfield, even if there weren’t as many dramatic moments as some of his peers were able to enjoy.

It should come as no surprise, then, that he’s proving just as popular after trading Merseyside for Rome to see out his time in Europe with a stint at Lazio.

Lucas was close to becoming an instant hero in a red shirt during his first Merseyside derby.

Signed as a 20-year-old from Grêmio, the midfielder was thrown in at the deep end in every sense for his Premier League debut, replacing Steven Gerrard at Goodison Park in a game delicately poised at 1-1 after Gerrard’s penalty had cancelled out a Sami Hyypiä own goal.

It turned out to be an inspired introduction from Rafa Benitez, with Lucas earning a last-gasp penalty when his goalbound shot was handled on the line by Phil Neville. However, from a more personal point of view, that meant Dirk Kuyt, not Lucas, was the hero of the hour. 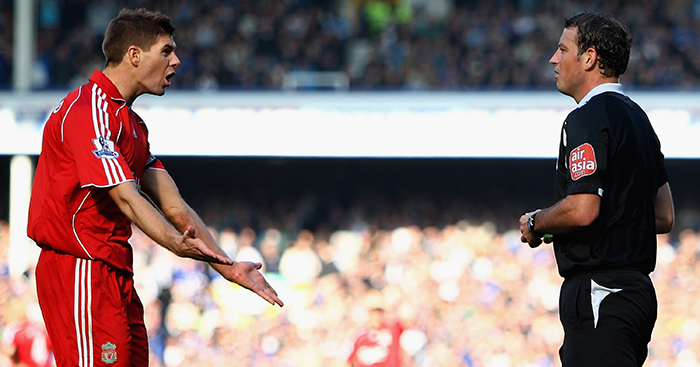 READ: Remembering when ‘Clatts’ stole the show in the 2007 Merseyside derby

As we’ve seen with Juan Mata at Manchester United, being a popular, personal guy can get you a long way in football.

And so it proved with Lucas, a man who you won’t hear a bad word about from more or less anyone who has spent much time with him, while the uproar at the club’s failure to grant him a testimonial speaks for itself.

Hard work has played a part, too, with a refusal to let critics get him down. If you’d told Liverpool fans in Lucas’ first couple of seasons that he’d ever end up becoming the Reds’ Player of the Year, they might have laughed. However, when he did take that honour in 2011 it was hard to deny he deserved it, taking 40% of fans’ votes to win comfortably ahead of closest challenger Dirk Kuyt.

“It shows [the fans] really appreciate the work I am doing for the team and I will remain the same – always giving 100% in every single game and trying to achieve good things for this club, where I feel really good and want to be a winner,” the Brazilian said.

When he left Liverpool, there was talk of a reunion with Benitez at Newcastle United, but ultimately he chose Lazio when presented with the chance to replace another midfield Lucas in Argentina international Biglia.

Reds supporters have undoubtedly played a part in the online votes which have seen him crowned as Lazio’s Player of the Year twice in a row, but that’s not to say he isn’t becoming just as popular in Rome as he was at his previous club.

After all, the replies to his message of thanks after that first award saw plenty of Lazio fans show their appreciation for a man who has won them over with his tough tackling, discipline and even the occasional goal – something we didn’t see all that much of from him in a red shirt.

I adore the fact that Liverpool fans still love Lucas Leiva but it seems a lot assume he's POTS because of their votes. He'd probably make it without a single 'red' vote as well. In closer competition with Acerbi but still …#Lazio #SerieA #reds #Poll pic.twitter.com/0ZEZi5OXMs

At 32, we might have expected Lucas to be preparing to wind down his career back in Brazil, perhaps even returning to Grêmio, but instead he has agreed to stay in Serie A until 2022 having helped Lazio win the Coppa Italia in 2019.

“It was an easy choice, I felt good in Rome from day one,” Lucas said after signing his new deal in May.

“The team welcomed me with open arms. I would like to be remembered as a player that gave everything for the shirt, for the commitment, for the respect of the club, players, and fans.”

Of course, it’s easy to be welcomed when you score goals like this in your first season, with the curler against Benevento seeing him race past his final tally of one league goal in a decade with Liverpool.

As Lucas enters the twilight of his career, we wouldn’t be surprised to see one or two people behind the scenes keeping an eye on his potential coaching credentials.

Popularity, on-pitch intelligence, patience – he has plenty of the criteria needed to become a top manager. Could that be how he eventually makes a hero’s return to Anfield?